Continuing from Qumran Not a Sectarian Community #1 . . . .

There was no lack of raw materials suitable for industrial uses in the region and we even have evidence for production of commercial resources but scholars have generally tended to downplay such activities as being only minor side-pursuits of otherwise occupied scribes. We pick up from the previous post by noting the kinds of industrial activities that one might reasonably have expected to see at Qumran as an integral extension of the Jericho royal estate and subsequently under Herod.

Keep in mind what such a list would mean for any scribe or monastic sectarian wanting to lodge there.

Qumran would have helped meet the high demand for leather sandals and aprons generated by the “intensive building programme of the Hasmoneans and, in particular, Herod.” Winter saw flocks brought into the area where aged animals and surplus male lambs and kids would have been slaughtered for their skins.

The production of leather was a malodorous and fly-ridden process. Not only was there the blood from the butchered beasts but the hair was removed from the hides by being soaked in dung and urine. The mid-second century CE author Artemidorus, a native of Ephesus, wrote:

‘The tannery is an irritant to everyone. Since the tanner has to handle animal corpses, he has to live far out of town, and the vile odour points him out even when hiding… The vultures are companion to the potters and the tanners since they live far from towns and the latter  handle dead bodies’ (Interpretation of Dreams I: 54; 2:20).

In the Mishnah it was written that both pottery kilns and tanneries should be at least 50 cubits from a town (Baba Bathra 1:10, 2:9); Qumran was considerably further than that from the Palaces of Jericho! Although the tanner was viewed negatively because his handling of dead animals, and the use of urine and dung in the preparation of hides, would cause him to be ritually unclean (Jeremias 1969: 301-12), nevertheless his products, from water skins to sandals and phylacteries, were in demand and the specialist preparation of parchment on which sacred texts could be written was regarded as an honourable profession. (pp. 53-4)

Early archaeologists conducted scientific tests on at nearby Eini Feshka for the possibility of a tanning operation for the production of parchment but apparently with negative results. No-one bothered with similar tests at Qumran, however, because . . . .

Firm belief that a scribal sectarian community occupied Qumran has blinded scholars to the evidence, according to Stacey:

Although Poole and Reed contended that ‘in neither of the two “industrial” quarters has a tannery been  recognised’, they accepted that ‘many of the constituent rooms have pits, vats or cobbled floors (suggesting that wet work was carried out there)’. They recognized that water was a ‘valuable commodity’, but concluded that it  could not ‘have been spared for tanning purposes’ and that ‘the community would have been too strict to permit’ (Poole and Reed 1972: 151 –2) tanning, a conclusion clearly reached not by scientific investigation, as they only did tests in Ein Feshka, but by accepting the prevailing theory of a permanent sectarian community. Perhaps they should have stuck to their scientific guns and concluded that the limited water supply and the nature of the tanning process meant that it was unlikely that any ‘sectarian community’ ever lived at the site, and insisted that analyses were carried out on sediments at Qumran. (p. 54)

Like Loading...
Fundamentally people will continue to accept an interpretation of the site that best satisfies their own psyche, although I hope that they will take into account my redating of its development. — David Stacey 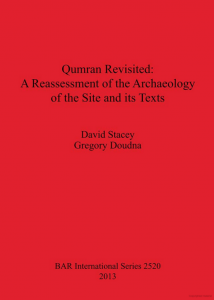 I have frequently heard of doubts that the Qumran (the site of the Dead Sea Scrolls) consisted of Essenes or even of any sectarian community at all, but until today I have not taken time out to read some of the relevant studies. Today I have come across many arguments denying that Qumran was ever a long-term site for a religious community of any kind, and certainly not a monastic-type of sectarian one. Not even Essenes set up base there. So I’ll set out here a subsection of those arguments. I’ve been reading articles, papers and chapters that cried out for my attention directly and indirectly as a result Gregory Doudna’s 2014 conference paper, “Dating the Scroll Deposits of the Qumran Caves: A Question of Evidence” (published 2017 in the conference proceedings, The Caves of Qumran) — see the previous post — and what follows is taken from the chapter by archaeologist David Stacey in Qumran Revisited: A Reassessment of the Archaeology of the Site and its Texts, and that he has helpfully placed online at academia.

I set out here Stacey’s argument that is based entirely on the archaeological evidence without any reference to the contents of the scrolls. Of course some may object that this is not fair since the contents of the scrolls are also part of the archaeological finds and they, too, need to be taken into account. So if we read in the scrolls evidence that they were written by a sectarian community, one vehemently opposed to the Jerusalem Temple establishment, for instance, then that information cannot be ignored. Bear with me. By the time we have finished these posts we may be wondering if some of us have rather been reading stories of a sectarian and anti-priesthood community into, not in, the scrolls. One step at a time.

Such a circular method — we interpret Josephus’s statements about the Essenes in light of the DSS and then use the alleged parallels to prove the identity of the two groups — could not generate stable results.

David Stacey begins by noting the circularity of the argument that the Qumran site was a base for Essenes.

Concepts found in the sectarian literature of the scrolls, and in references to Essenes by various classical authors, were freely used to interpret aspects of the archaeology of Qumran, and these interpretations then used, in a circular argument, to ‘prove’ that the site was ‘religious in character, with special ritual observances of its own’ (de Vaux 1973: 87). (Stacey, p. 71. My own bolding and formatting in all quotations)

Stacey’s background as an archaeologist is in studying sites nearby Qumran (e.g. Jericho) from the same general period. His conclusion is that the Qumran site was for most of the two centuries either side of the BCE/CE dividing line a seasonally occupied malodorous site producing leather, glue and dyes for wool. It was deserted every summer when it became “unendurably hot” for both humans and flocks.

Not a very romantic picture, is it. Stacey better have some good arguments if we wants to shatter illusions of a scholarly community happily withdrawn from the outside world and dedicated to writing and studying scrolls.

The concept of a community of poor sectarians isolated in the desert and busily writing scrolls has some obvious appeal for scholars labouring in the ivory tower of academe, or for theologians sequestered within their own esoteric communities.

Furthermore it is the romantic, mystical aura that has been generated around Qumran that sells semi-popular books, fills lecture halls, and brings in the tourist, not the unremarkable ruins themselves.

Any indication that the site may have existed solely to play a small part in the local regional economy will be resisted as an altogether too mundane concept. (p. 71)

The isolation of the site has been stressed by those who believe it was occupied by a monastic type of sect. For example on BiblePlaces.com we read:

10 miles south of Jericho, Qumran was on a “dead-end street” and provided a perfect location for the isolationist sect of the Essenes to live.

The modern geo-political situation at the time of the excavations meant that Qumran was exaggeratedly isolated, being close to a border between hostile modern states. Although the actual border between Jordan and Israel was, until 1967, some kilometres to the south (to the north of Ein Gedi) the ruggedness of the terrain south of Ein Feshka meant that Qumran was very much a border post. When I hitch-hiked to Qumran in 1964 the only vehicles in the vicinity of Qumran were military, the few people one saw were soldiers, and there were signs warning of imminent mine fields further south. Similar warnings could be seen, I later noticed, on the other side of the border, immediately north of Nahal David in Ein Gedi. This apparent isolation at the time of the excavations added artificial weight to the concept of a secluded community that had been gleaned from both the sectarian scrolls and the classical authors. (p. 7)

Stacey discusses in detail the site’s administrative and economic links to Jericho and further, quoting a line from Yizhar Hirschfeld, writes:

Qumran was only one of several sites along the western littoral of the Dead Sea to be developed during the Hasmonean period, most probably by Jannaeus [103-76 BCE], who, eventually, gained control of land to the north-east of the Dead Sea where he established a fortress at Machaerus, c. 90 BCE (War  7.6.2). Harbour installations were built at Rujm el Bahr and at Qasr el-Yehud/Khirbet Mazin (Bar-Adon 1989) and a large structure at En el-Ghuweir was built (Bar-Adon 1977).37  Further south Ein Gedi continued to be a thriving settlement. Qumran was thus ‘a  veritable maelstrom of activity rather than an isolated ascetic site’ (Hirschfeld 2004b: 213).

Similar scenarios are depicted for the later Herodian period.

To give some background to that preceding quotation notice what the Qumran tower indicates.