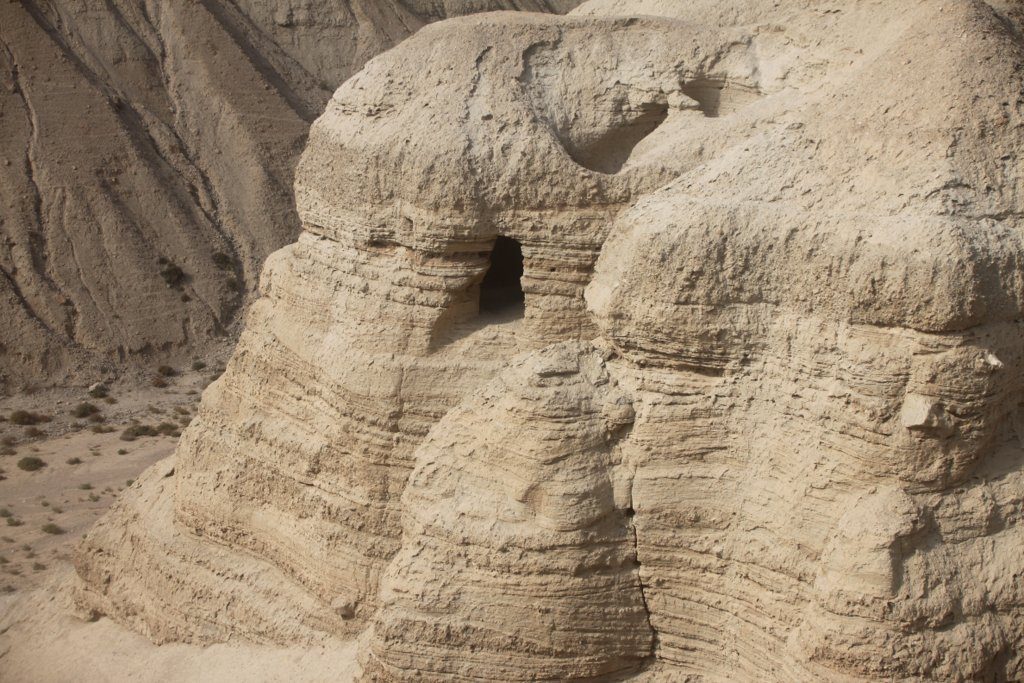 A paper presented last the Caves of Qumran 2014 conference at Lugano, Switzerland, by Gregory L. Doudna argues that

the traditional dating of the scroll deposits of the caves of Qumran to as late as the time of the First Revolt [66-70 CE] is supported by neither evidence nor plausibility. (Doudna 2017, p.238)

Doudna’s paper makes its case through the following steps:

Matthew 5:18 For truly I tell you, until heaven and earth disappear, not the smallest letter, not the least stroke of a pen, will by any means disappear from the Law until everything is accomplished. (NIV)

That last (fifth) point surprised this amateur. I had not been aware of the evidence that the Masoretic (Hebrew) text of the “Old Testament” was stabilised so early. As Doudna remarks, on the assumption that the Gospel of Matthew was composed in the first century,

Once this is realised, no longer will the saying of Matt. 5:18 referring to iotas and keraias in the writing of scribes scrupulously copying the books of Moses with letter-perfect accuracy, and, alluding to the decorative keraias of the most developed formal hands, be regarded as anachronistic. Matt. 5:18 may become recognised as a realistic allusion to scribal practice and ideology before the destruction of the temple, yet postdating the latest texts of Qumran. (Doudna, p. 246)

Doudna suggests that the I would like to revisit some of my recent thoughts and posts arising from Eva Mroczek’s The Literary Imagination in Jewish Antiquity to consider whether this data has implications for some aspects of just how loose were the concepts of “sacred scriptures” and “canon” in the Second Temple era.

In this post I would like to take time to grasp Doudna’s first point about the historical references and allusions in the scrolls all pertaining to the pre-Christian era. With new ideas I’m a slow and painstaking learner so to help me grasp the point I followed up the following in Doudna’s paper:

A 2003 study of Michael Wise remains the most comprehensive attempt to inventory the historical allusions in the Qumran texts. Wise counted what he defined as “first-order” allusions, and not “second order” allusions (allusions that depend on the correctness of a prior allusion identification), which Wise suggested would have increased — perhaps doubled — the numbers if that were done. Wise counted 6 allusions in the second century BCE, rising dramatically to 25 in the first century BCE ending at 37 BCE. Then, 0 for the first century CE, 0 for second century CE, etc. Other studies have found this same pattern of distribution. (Doudna, p. 239)

Wise demonstrates the history of uncertain and contradictory results from paleographic dating and writes:

Paleographic dating is imprecise because it is inherently subjective. (Wise, p. 57)

There’s an entire post there just to draw out the substance of that claim. Wise further points out the evidence against the once popular idea that there was a single community of scribes responsible for the copying of all of the scrolls.

The presence of hundreds of different hands seems inexplicable unless the majority of the scrolls originated elsewhere than at Qumran. (Wise, p. 59)

The following table is a précis of Wise’s more detailed data: END_OF_DOCUMENT_TOKEN_TO_BE_REPLACED