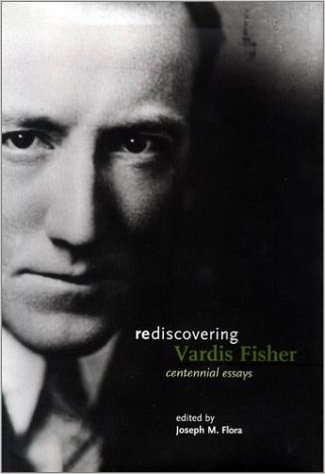 A few weeks ago in the course of explaining why I called this blog “Vridar” I posted a few remarks about American author Vardis Fisher. The name “Vridar” was Vardis Fisher’s fictionalized autobiographical name in the last novel of his Testament of Man series, Orphans of Gethsemane. I was pleased to read last evening that I am not alone in my interpretation of some key aspects of Vardis Fisher’s life and interests . . . and I wonder if I even share some of his reasons for taking a special interest in the violence and trauma arising from the politics of the Middle East. The bolding in the critic’s quotation is, of course, my own.

In a period of the resurgence of fundamentalist religions in many parts of the world, Vardis Fisher’s Testament of Man may be a text of some significance.

Fisher, raised by a strict Mormon mother on a solitary Idaho homestead, commanded a more sympathetic view of zeal than could most American intellectuals of his time. Possessed of a dual consciousness, Fisher rejected the rule-bound exclusivity of any self-appointed “chosen” people, but was all the same drawn to the passion of the prophet. In Testament of Man, he carried out his own arduous quest — to understand the moral development of western humanity. He donned the prophet’s mantle to warn against the dangers of fanaticism. Chronicling the spiritual development of his forebears, Fisher created a prophetic work [i.e. the Testament of Man series of novels] mourning the lost opportunities of Judeo-Christian tradition. He identified those points at which, in his opinion, a wrong turn was taken, a wrong road chosen.

In dishonoring the Mother, demonizing the “other,” [in  privileging law over ethics, and failing to synthesize love of wisdom with love of God, humanity set a course that has led to Inquisition and Holocaust. At the beginning of the twenty-first century, that course has yet to be adequately altered. Religion and reason have yet to be reconciled, and Reuben’s passionate appeal in The Island of the Innocent has yet to be answered: “But there’s a job to be done or there’ll be no Alexandrias. We’ll have a world of Jerusalems”(63).

The anthropology and sociology that informed Fisher’s views have been superseded in the academic world but read as human dramas they have not lost their relevance for today. Of The Island of the Innocent Zahlan writes,

The Island of the Innocent is a daring book. Perhaps only someone raised among Mormons withdrawn from a world of “Gentiles” could, in the last 1940s and early 1950s, have written such a work. In the years after World War II when the horrors of the Nazi Holocaust were being exposed, Vardis Fisher had the courage and clear-sightedness to maintain an adamant opposition to exclusivist religion and politics. Having been exposed as a boy to theocratic-fortress mentality, he could insist on the need to resist the powerful temptation of a tribalist response to even the most extreme persecution. (p. 201)

The tribalism permeating so much of Israeli society and politics is no less problematic today.

Rejecting or misunderstanding teachers such as Joshua [Jesus], the people of Vardis Fisher’s Holy Land continue in the erroneous ways of their ancestors and base three major religions on rejection of the Mother and deification of the Word.

Fisher’s Middle East focuses on Jews and centers on Jerusalem. . . . His concentrating of theological, ethical, and political struggle on the Jews does not, however, unreasonably privilege Jewish perspectives. In fact, he dwells on dissensions among Jewish believers as, in later volumes of the Testament, he emphasizes divisions among Christians: Hasidim contend with Letzim, and Essenes with Pharisees, as do the factions of the early church among themselves. A onetime citizen of the Mormon Zion, Fisher no more endorses ways of thinking such as those that underlie right-wing movements in contemporary Israel than he does any other exclusivist ideology. To the degree that he deals with the historic relationship of the Jews with other peoples, Fisher foregrounds tensions similar to those that plague the Middle East today.

Interestingly Anne Zahlan introduces another scholar who has also influenced my views, Edward Said, and as I have done in posts here singled out a tragically ironical point that Said makes about antisemitism:

In the second half of the twentieth century, Said explains, the “myth of the arrested development of the Semites” underwent a curious bifurcation: “[O]ne Semite went the way of Orientalism, the other, the Arab, was forced to go the way of the Oriental.”15 In the aftermath of World War II, anti-Semitic hostility has been redirected to Arabs; Israelis now serve the western imagination as new colonial heroes who stand in for “white men” in a depraved Orient. Some of Fisher’s depictions of “the Syrians” and “Antiochus of Corinth” fit an updated Orientalist model of cruel barbarians besieging devout Hebrews, but the author of the Testament of Man takes no stand above or distant from the Semitic peoples he describes. . . .

Portraying the Middle East as he does, Fisher looks not only back but also “ahead” to . . . his own [world]. He depicts the birthplace of western civilisation was a battleground, painting a picture colored by pained awareness of the failings of his own culture. (pp. 205f)

So I’m not alone in my dual interest of religion and politics, in particular seeking to understand the roots of religion and the violence of religiously minded people today — all the while idealistic enough to do my little bit for a world of Alexandrias competing with the Jerusalems.

2 thoughts on “Religion and Understanding the Zealots, Theirs and Ours”