There are many excellent biblical scholars whose works are discussed here as often as opportunity arises. Check out the Categories list in the right column here to see the extent of our coverage.

But as with any profession there are some rogues who need to be exposed. A few hours ago on the Religion Prof blog appeared a post in effect leading the public to believe that mainstream biblical scholars have published far, far more on the topic of the historicity of Jesus than anyone who doubts Jesus’ historicity. Here is the screenshot: 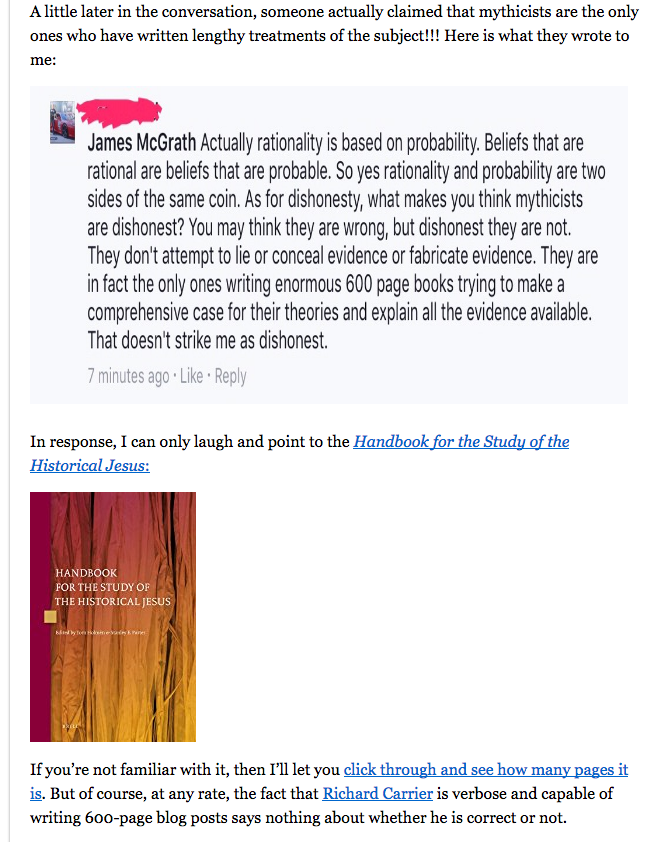 The link is to the following page on Amazon:

Scrolling down one sees the number of pages is said to be 3300. 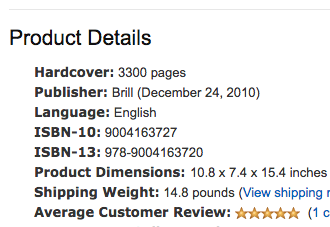 I have access to the electronic edition and can confirm that the number of pages is closer to 4000 than 3000.

But is it honest to claim that these four volumes under the title Handbook for the Study of the Historical Jesus address the question of the historicity of Jesus itself? After all, that is the clear message and point of the “religion prof’s” post. His message is that mainstream scholars have published far more on the topic that is addressed by, say, Richard Carrier.

But open up the pages of those four volumes and one soon discovers that this claim is misleading.

Of the over 3700 pages contained in these volumes there are exactly 29 pages that appear on first glance to be devoted to the question of whether Jesus existed or not. They are by Samuel Byrskog in a chapter titled “The Historicity of Jesus: How Do We Know That Jesus Existed?” — pages 2183 to 2211.

The four volumes are not about the question of Jesus’ historicity but in fact presume the existence of Jesus and from that starting point address scholarly questions relating to how we can learn what kind of person this Jesus was. Let me show a few more screen shots from the table of contents so you can get the idea:  END_OF_DOCUMENT_TOKEN_TO_BE_REPLACED

Jim West indicates that because of his training and guidance by the holy spirit he speaks with a true understanding of the Bible. All others, he infers, inevitably fall into error or fanaticism. The Bible according to the trained (at an unaccredited seminary) and spirit led Jim is not simply an collation of historical documents but is imbued with magical powers, being

incapable of causing believers to err or stray from the revealed will of God. The Bible reveals the truth about the Divine and the Human. Believers who adhere to that revelation are kept safe from errant behavior or belief and the Scriptures do not err in teaching said proper behavior or belief.

I’m reminded of belief in the curse of the pharaohs and the healing powers of a murderer’s corpse. Jim does insist that the secret to drawing on this saving power from the Bible is that it be “correctly understood”. Hence only a person with both training and God’s spiritual presence can properly divine the true mantic meaning of the sacred magical words.

Jim West is also one of the pioneers of biblioblogging and today he laments what he sees as the decline of informed blogging about matters pertaining to biblical scholarship: END_OF_DOCUMENT_TOKEN_TO_BE_REPLACED