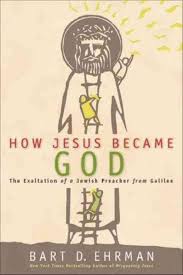 Why does Ehrman (presumably following widespread and long-held scholarly opinion) believe these verses are pre-Pauline words being quoted by Paul?

He writes that the verses are

highly structured, without a word wasted, quite unlike how normal prose is typically written and unlike the other statements Paul makes in the context.

contains a number of words and ideas that are not found anywhere else in Paul.

Those unique ideas and phrases:

For a short two verses, those are a lot of terms and ideas that differ from Paul. This can best be explained if he is quoting an earlier tradition. (p. 221)

Paul nowhere else expresses any interest in (or even knowledge of) Jesus as an earthly messiah or a descendant of David. Paul nowhere else thinks of Jesus being made the Son of God only at his resurrection.

In fact — something Ehrman fails to mention despite his efforts to contrast verses 3 and 4 with everything we know about Paul’s Christology elsewhere — Paul stresses he is not the least interested in Christ “according to the flesh”. That Christ should be a descendant of David would have meant nothing to Paul. See 2 Corinthians 5:16:

There is one more factor of interest for Ehrman in his argument that the passage is a quotation:

It is interesting as well to note — for purposes of showing that this is an existing creed that Paul is quoting — that one can remove it form its context and the context flows extremely well, as if nothing is missing (showing that it has been inserted):

“Paul, a slave of Christ Jesus, called as an apostle and set apart for the gospel of God, which he announced in advance through his prophets in the holy scriptures, concerning his son . . . Jesus Christ our Lord.”  (p. 222)

The motive for quoting an anomalous creed

Why does Ehrman think Paul would quote such a creed? His explanation is that Paul is hoping to gain support from the Roman church to continue his missionary journey to “the ends of the world” i– that is, in Spain — even though the Roman church does not know him personally and has no doubt heard lots of negative rumours about him. For these reasons Paul, being the soft touch and gentle Christian that he is, very carefully opens up his letter with pains to get everything right and win the Romans on to his side: so he quotes a creed he is sure they are familiar with and that they would no doubt accept. Yes, Paul’s own views were more “sophisticated” than those of the creed, but Paul is meekly being “all things to all” men and women in order not to offend.

I find this explanation very strained. Sure one can find clues to justify each point made, but the overall conclusion as outlined here simply does not fit the larger themes of the epistle itself. Rather, the argument presented strikes me as lifting a few incidental remarks in the letter to central importance.

But let’s leave that rationale aside for now and concentrate on the arguments raised in support of the passage being a quotation of a very early creed. Questions arise:

Is it really likely that a formal and structured creed would be born so very early after the personal experience of believing Jesus to have been risen from the dead?

Why does Paul not explicitly acknowledge that he is quoting a well-known creed?

If he feels he does not need to explicitly acknowledge the fact that he is quoting, is this because the creed is so very well and widely known? But if that is the case then why do we not find the thoughts expressed in it mirrored elsewhere as well?

As for the second question above, I decided to run a quick search through the rest of Romans to see how many times Paul did take the trouble to point out when he was quoting even very well-known passages. My recollection told me there were at least a couple of such instances. I ran a quick search for the translation words “as it is written” in the King James version and found they occurred fourteen (14!!) times. I think it is safe to conclude that we have here a fair indication that in the Greek text Paul had a habit of making it clear whenever he was quoting passages even when they were well known as such to all.

So we have another anomaly with verses 1:3-4, but not one that supports the view that they are a quotation.

But look again at the reasons Ehrman listed for believing the passage to be a quotation of a pre-Pauline saying. I am sure you are way ahead of me on this one already, so let’s pause to have a look at one set of criteria set out for identifying interpolations.

William O. Walker in Interpolations in the Pauline Letters lists six criteria to assist in deciding whether a passage is a subsequent addition:

Ehrman has said that removing the passage in question from the letter leaves the remaining text flowing very well indeed thank you very much. #2 Contextual evidence.

Ehrman has said that the ideas expressed in the passage are alien to the Christology found elsewhere in the Romans. I added Paul’s stress upon not having any interest in Christ “according to the flesh”. #3 Ideational evidence.

Ehrman has compared the phrases used in the passage and found them unlike Paul’s usage elsewhere in Romans (e.g. “spirit of holiness” for the Holy Spirit). We also see that Paul often quotes well-known passages in Romans and at least fourteen times introduces them with a clear statement that he is indeed quoting: “As it is written”. There is no such indicator with the supposedly pre-Pauline creed. #4 Comparative evidence.

Ehrman has found motivation for a quotation in Paul’s eagerness to get off on common ground or at least a point all can agree upon with his essentially unknown readership who have heard negatives about him and from whom he wants support to continue his journey to Spain. I find this rationale too much of a stretch. If such were Paul’s motivation he would surely be expected to explain and explicitly justify his own Christological views at some point, but he does not. And it is not like Paul to play deceptive word-games to win favour. On the other hand, we do know that at the time Paul’s letters attracted renewed attention in the late first and early second century they were at the centre of a controversy between Marcionites and proto-orthodox. The “quoted” passage does indeed serve very well as an anti-Marcionite barb with its stress upon the humanity and Jewishness of Jesus. See my discussion on the vridar.info website: Romans 1:2-6 — Anti-Marcionite interpolation? #5 Motivational evidence.

Ehrman suggests that Paul wanted to begin the letter with a sop. I suggest that by placing an anti-Marcionite passage at the very opening of the letter the reader is being disabused right from the outset of any suggestion that Paul should be interpreted in Marcionite ways. #6 Locational evidence.

Quotation of a pre-Pauline creed going right back to the first disciples of Jesus? Or an anti-Marcionite interpolation?

If the arguments swing more to the interpolation side then we are left without any Pauline testimony in support of Ehrman’s thesis for how Jesus became God.