So what could have motivated Luke to do something like this?

In fact there is a good explanation for why Luke would want to use these preliterary traditions in his speeches: because they encapsulate so well his emphasis in these addresses to “unbelievers” that God has drastically and dramatically reversed what humans did to Jesus, showing thereby that he had a radically different evaluation of who Jesus was. Humans abused and killed Jesus; God reversed that execution by raising him from the dead. Humans mocked Jesus and held him to be the lowest of the low, an inferior human being; God exalted Jesus and raised him to his right hand, making him a glorified divine figure.

These preliterary fragments provided Luke with just the material he needed to make this point, and so he used them throughout his speeches in order to stress his powerful message. The Almighty God had reversed what lowly humans had done, and Jesus, far from being a failed prophet or a false messiah, was shown to be the ruler of all. By raising Jesus from the dead, God had made him his own Son, the Messiah-King, the Lord.

So theologically Luke, we are to assume, did not technically agree with the words expressed, but he did love the way they advanced his larger literary theme of reversal of fortunes so admirably.

I am reminded of arguments by Paula Fredriksen and Burton Mack to the effect that if we have a literary-narrative explanation for what we read, something that appears because of the way it so neatly advances the plot, then we have a satisfactory explanation and need not seek to find additional reasons for the literary element. They were talking about the Temple “action” where Jesus cast out the money-changers from the Temple. They see no reason to assume its (otherwise quite implausible) historicity. See Why the Temple Act of Jesus is almost certainly not historical for details.

But if inconsistency is Luke’s trademark . . . . 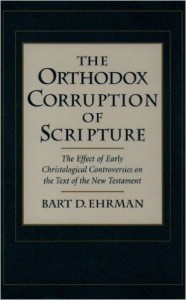 As happened when reading Ehrman’s arguments around Romans 1:3-4 questions arose in my mind. These led me back to an earlier work by Ehrman, one which I found much more impressive than some of his later outputs: The Orthodox corruption of scripture : the effect of early Christological controversies on the text of the New Testament. There it is interesting to read a quite different approach and conclusion to some of these very passages in Acts.

In that 1993 publication Ehrman argued quite something else, quite the opposite, in fact. On page 64 he speaks of the assumption that Luke would want to be consistent throughout his writings on his arguments for Christology as “demonstrably false.”

An obvious example comes in Luke’s depiction of Jesus as the Messiah.

Similarly “inconsistent” are Luke’s predications of the titles Lord and Savior to Jesus.

Nor does the title Son of God, the title that is directly germane to our present deliberation, escape this seemingly erratic kind of treatment:

This kind of titular ambiguity does not inspire confidence in claims that certain readings cannot be Lukan because they stand in tension with Luke’s use of christological titles elsewhere. (1993, p. 65, my formatting and bolding in all quotations)

I’m reminded here of other arguments I have encountered suggesting that Luke is the most catholic of the evangelists, or at least the person who produced the final canonical version of our Luke-Acts, in that he incorporated a wide range of beliefs, including some contradictory ones and those found in the earlier gospels (including possibly John).

Anyway, whatever we think of that thought, the quotation above from Ehrman’s earlier work kind of pulls the rug out from his current arguments in How Jesus Became God to the effect that Acts contains evidence that the earliest followers of Jesus held on to a primitive Christology.

Once again we see evidence of the ad hoc nature of arguments built upon the assumption of the historicity of Jesus.