Larry Hurtado has roused blogospheric attention with his adverse evaluation of the N.T. Wright’s unconventional interpretation of what the early Church believed about the “second coming” of Jesus.

The Bishop of Durham has broached the idea before but Hurtado’s criticism his directed towards the relatively recent (2013)  Paul and the Faithfulness of God. Wright contends that Paul’s teaching that God’s Spirit dwelt in the Church as his Temple could only mean one thing among Jews of Second Temple days: God had returned to dwell on earth with his people. God’s Temple was once again filled with the Glory of God. God, YHWH, had returned to his people in Jesus who was vindicated after the resurrection and that same YHWH now shed his glory on earth in the lives of the saints. Christ is the first to be resurrected and the rest of his brethren will be raised at his final appearance from heaven (the parousia). The (extended) day of that resurrection is now, but God’s promise to return to his people and dwell among them was fulfilled when he came in Jesus and continues now that he lives in his earthly temple, the church. This final event is merely seen as the completion of the renewal that has begun with Christ’s resurrection. Thus there is no “second” coming: God has fulfilled his promise to come to live with his people now.

Hurtado will have none of it. Christians (like Hurtado) are still waiting for the second coming just as Paul really taught their original generation. So deep is this belief furrowed into the mind of the conservative scholar that any contrary view must be bereft of all supporting evidence.

My own piece is a critical study of Wright’s claim that the earthly ministry of Jesus was seen from the first as YHWH’s “return to Zion,” . . . .

I judge his claims faulty, unsupported by the evidence.

Hurtado maintains that the long promised return of YHWH to Zion will be fulfilled in the second coming of Jesus. It was not fulfilled in his first visit.  END_OF_DOCUMENT_TOKEN_TO_BE_REPLACED

Charles Cameron is blogging about a book of his that is hopefully will be published soon: Jihad and the Passion of ISIS: Making Sense of Religious Violence. The first of these blog posts is On the horrors of apocalyptic warfare, 1: its sheer intensity.

Cameron builds on a number of works that I have posted about here on Vridar, so I am looking forward to his own contribution. He writes:

We now have, I believe, a strong understanding of the Islamic State and its origins in such books as Stern & Berger, ISIS: The State of Terror, Jason Burke, The New Threat, Joby Warrick, Black Flags: The Rise of ISIS, and Weiss & Hassan, ISIS: Inside the Army of Terror. Delving directly into the key issue that interests me personally, the eschatology of the Islamic State, we have Will McCants‘ definitive The ISIS Apocalypse. My own contribution will hopefully supplement these riches, and McCants’ book in particular, with a comparative overview of religious violence across continents and centuries, and a particular focus on the passions engendered in both religious and secular movements when the definitive transformation of the world seems close at hand.

What follows is the first section of a four-part exploration of the horrors of apocalyptic war.

Cameron draws upon a dramatically colourful Winston Churchill account to convey the power of the Mahdi on the imaginations of followers in his day.

In his second post On the horrors of apocalyptic warfare, 2: to spark a messianic fire he encapsulates the sense of apoclyptic fervour in a passage from another book on my “to-read list”, Richard Landes’  Heaven on Earth: The Varieties of the Millennial Experience:

For people who have entered apocalyptic time, everything quickens, enlivens, coheres. They become semiotically aroused — everything has meaning, patterns. The smallest incident can have immense importance and open the way to an entirely new vision of the world, one in which forces unseen by other mortals operate. If the warrior lives with death at his shoulder, then apocalyptic warriors live with cosmic salvation before them, just beyond their grasp.

I’m looking forward to the remainder of Charles Cameron’s series. 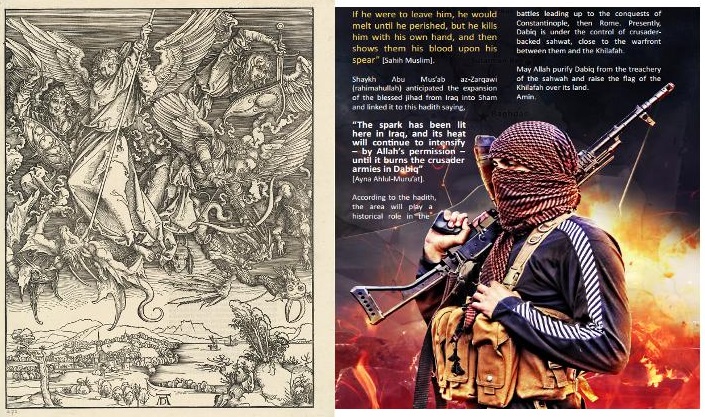