NazarethGate by René Salm furnishes readers with far more than the published archaeological evidence for the existence of Nazareth at the supposed time of Jesus. In taking up the task of mastering the research literature on the archaeology of Nazareth Salm has found that archaeologists well-known for their proclamations of finds that are relevant to our understanding of Jesus have a track record of questionable methods and reliability. Hence the pun on the Watergate scandal in the title as well as the subtitle: quack archeology, holy hoaxes, and the invented town of Jesus. Salm has done the work to earn the right to make these judgements.

In my previous post I touched on Salm’s exposure of the “less than optimal” work of Ken Dark. (Compare also A Critique of Ken Dark’s Work at the Sisters of Nazareth Convent.) There is much more. But here I am pausing to set out for easy reference a very general summary of the archaeological evidence for Nazareth. That is, what follows is taken from the scholarly published literature as distinct from unverifiable popular press reports. The former are testable; the latter — even if quoting opinions of certain archaeologists — are not.

Salm is able to point to the apparent influence his earlier book, The Myth of Nazareth, has had on the chagrined re-writing of some of the claims made about the archaeological evidence. Hopefully this new work will help raise a more public awareness of the tendentiousness (even incompetence) of the claims of some of the archaeologists who press claims for evidence that Nazareth was the home of Jesus.

From the Bronze Age to Roman Times

In the Bronze and Iron ages there was a significant settlement in the region of what we know as the Nazareth valley area. It was known as Japhia in the Bible. This city was destroyed by the Assyrians around 700 BCE.

From 700 BCE to roughly 100 CE: no material evidence exists testifying to a settlement in this region.

Eleven pieces of moveable evidence (pottery, oil lamps) have at times been upheld as evidence that a settlement was re-established in the centuries prior to the turn of the era.

In every case but one these pieces of evidence have been redated to later times; the exception is a piece redated to the earlier Iron Age.

Approximately two dozen kokhim tombs in the Nazareth basin. According to “Hans-Peter Kuhnen — a leading expert on kokhim tombs in Galilee — those tombs first spread to the areas north of Jerusalem from the south, and they did so not before about the middle of the first century CE.” Given that around 90% of the artefacts from the Nazareth basin that have been published have been found in these tombs, it follows that the bulk of Nazareth evidence dates to well after the turn of the century.

Examining the published literature (e.g. Varda Sussman), one learns that “Herodian” is an erroneous label and the lamp is more securely dated to well beyond the period of Herod the Great.

The hill on which their city was built

and they got up and drove Him out of the city, and led Him to the brow of the hill on which their city had been built, in order to throw Him down the cliff. — Luke 4:29

There is no cliff in the region over which one can toss anyone to their demise.

The hillside does reach 20% in places and his too steep for the construction of dwellings.

Could they have terraced the hill for this purpose? Problem is there is no indication of any terracing in the region around the traditional site of the village — around the Venerated Area of Nazareth. Besides, there is a nice flat valley floor nearby.

Then again, the hillside is pockmarked with hollows, caves, and silos — some extending to several superimposed chambers within the earth. The Franciscan area — where most of the excavations have taken place — is literally honeycombed with cavities with over 68 identified silos once used for the storage of grain. This could not have been an area of habitations. Rather, the material record emphatically demonstrates that it was an area used for agricultural activity and associated food storage. (NazarethGate, p. 137)

Dozens of kokhim tombs on the hillside further shows the area was not used as a settlement. Even the Venerated Area is located in the middle of a Roman-era cemetery. The Church of the Annunciation sits on three to five such tombs. Tourist guidebooks do not advertise this fact.

As mentioned, this post is only a general overview of the relevant archaeological evidence (or lack of evidence) for the existence of Nazareth in the early first century.

How this state of play has been misrepresented in the media, often with the encouragement of media-savvy archaeologists, is elaborated in depth in NazarethGate. I look forward to posting more from this book. 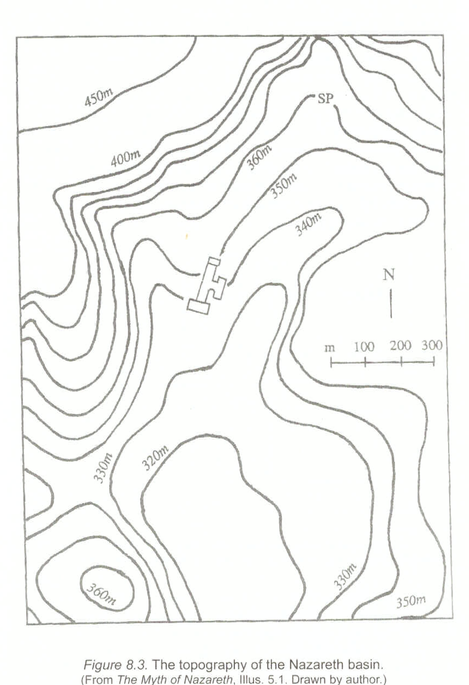 18 thoughts on “Nazareth, General Overview of the Evidence”