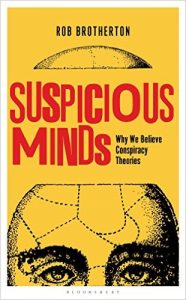 So what are those “six crucial elements”?

[G]etting hung up on determining whether a contested claim is true or false misses a crucial feature of the conspiracist style. . . .  Conspiracy theories are unproven by design. . . .

As scholar Mark Fenster explained, conspiracy theories don’t merely aim to describe something that has happened; they purport to reveal hitherto undiscovered plots in the hopes of persuading the as yet unalerted masses. They come with a tacit admission that the ultimate truth is just out of reach, behind the next curtain, able to be glimpsed but not yet grasped. The conspiracy is forever being unraveled, but the holy grail of incontrovertible proof— the undeniable evidence that will alert the masses and finally topple the house of cards— has not yet been produced. Whether they turn out to be true or not, conspiracy theories, deep down, are unanswered questions.

Like those people who say that are not suggesting a conspiracy at all, but are “just asking questions”. — Or “JAQing off”, as Brotherton reminds us the saying goes.

2. Nothing Is As It Appears

Our second crucial element of the conspiracist style is the idea that we’re not merely being kept in the dark about something— we are being actively fooled. In the world according to conspiracy theories, appearances mislead, and nothing is quite as it seems. . . .

Mike Wood and Karen Douglas explain that conspiracy theories operate on the assumption that “there are two worlds: one real and (mostly) unseen, the other a sinister illusion meant to cover up the truth.” As a result, conspiracy theories are contrarian by nature. They flip conventional wisdom on its head. In the world according to conspiracy theories, the obvious answer is never correct, and there is always more to things than meets the eye. Accidents are planned, democracy is a sham, all faces are masks, all flags are false.

3. Everything Is Under Control

Things seem a whole lot simpler in the world according to conspiracy theories. As Daniel Pipes put it, conspiracy theorists seem to have “startling faith in the capabilities of their enemies.” At the very least, they propose that when the conspirators set events in motion they are able to predict how things will unfold with seemingly clairvoyant foresight. The conspirators are apparently willing and able to pull together as a team in total obedience to the conspiracy, almost as if it were a singular organism rather than a collection of people, each with his or her own personal ambitions, scruples, families, hobbies. . . .

There is a caveat, however. The conspirators are staggeringly competent— except every now and then when they mess up just a little bit. . . .  If the conspiracy were absolutely perfect, after all, if the conspirators never let slip a single clue, then nobody would have any idea what they were up to. . . .

Sensational allegations have been a central motif of the conspiracist style, from the antisemitic blood libel to the first fully fledged conspiracy theories that emerged in the wake of the French Revolution. . . . .

At the very least, the conspirators are said to have a Machiavellian streak a mile wide. They “have a prize worth cheating for and the will and ability to stop at nothing to get it,” as Joe Uscinski and Joseph Parent put it. A common refrain among conspiracy theorists is cui bono?— who benefits? Anyone who stands to gain from some situation is automatically suspected of bringing it about. Adding to the intrigue, the villains often turn out to be the very individuals and institutions we normally expect to act in the public interest,

But the conspiracist style imbues each small anomaly with profound significance, using it to cast doubt upon the entire mainstream explanation.

6. Heads I Win, Tails You Lose

Conspiracy theories are constructed around an unassailable, irrefutable logic, according to which absolutely nothing can disprove the conspiracy— even evidence to the contrary.

Which is why you know that my cynicism towards conspiracy theories only proves what a gullible pawn of the conspirators I am. And my awareness of this fact only demonstrates how incorrigibly deluded I really am.

19 thoughts on “The Conspiracist Style”