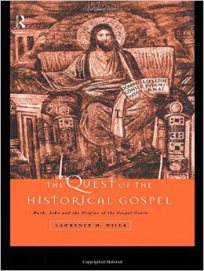 Several times I’ve referred to comparisons between the ancient tale of Aesop with the gospel accounts of Jesus, referring readers to Lawrence Wills’ book, The quest of the historical gospel : Mark, John, and the origins of the gospel genre, and Whitney Shiner’s chapter “Creating Plot in Episodic Narratives: The Life of Aesop and the Gospel of Mark” in Ancient Fiction and Early Christian Narrative. (See Evidence for Pre-Gospel Oral Traditions and Related Questions and What Mark’s Episodes Do For Readers (and the real historiographical question to ask) where I discuss Wills and Shiner each; other posts make passing references.)

Well for all you readers who really did want to read those books or who were waiting in vain for me to get around posting on them in depth, this is your lucky day. Matthew Ferguson of the Κέλσος blog has given up waiting for both of us and posted the nitty gritty details on these authors and their studies of Aesop vis à vis the gospels:

Lawrence Wills: “The Life of Aesop and the Hero Cult Paradigm in the Gospel Tradition”

13 thoughts on “Lawrence Wills: “The Life of Aesop and the Hero Cult Paradigm in the Gospel Tradition””