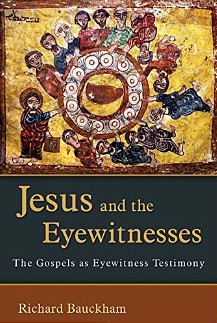 Richard Bauckham is probably best known to the wider public for his book Jesus and the Eyewitnesses: The Gospels as Eyewitness Testimony in which he argues that the gospel narratives about Jesus were derived from reports of eyewitnesses. Is it reasonable to ask if Bauckham’s thesis was the product of disinterested historical inquiry?

Anyone who has read the first chapter of Jesus and the Eyewitnesses will know that my overall concern in the book was to help Christians recover the confidence that the Jesus they find in the Gospels (rather than in some dubiously reconstructed history behind the Gospels) is the real Jesus.

Does this entitle us to be suspicious that the arguments might have been tendentious?

I have covered in depth what his “historical arguments” look like in a detailed series of chapter by chapter posts now available in the archives. One of the more bizarre of Bauckham’s “historical arguments” is to compare the gospel narratives of the crucifixion and resurrection of Jesus with testimony of another “unique” event, the Holocaust of the 1940s. To approach the testimony of survivors/eyewitnesses with a hermeneutic of “radical suspicion” is “epistemological suicide”. Normative approaches of critical analysis of the evidence, of testing the evidence, are set aside in preference for a choice between either believing or rejecting the testimony, for either cynically rejecting the “astonishing testimony” of something unspeakably unique or charitably trusting the words of a privileged eyewitness report. Ad hoc rationalisations dominate: if passages such as the crucifixion narratives are replete with biblical (Old Testament) allusions it is because the eyewitnesses were overawed by their memories of the events; yet if passages such as the resurrection narratives contain no biblical allusions it is because the eyewitnesses were even more overawed by their memories of something that “defied reality”.

What about Bauckham’s personal faith interest? Does that shape his work in any way?

Maybe (but how could I ever know?) I would still love God if I came to the conclusion that there was no shred of real history in the New Testament. But, to say the least, I would find it more difficult to believe in God if I did not believe that God became incarnate as the man Jesus, who died and rose bodily from death and is alive eternally with God. (Here I differ profoundly from people who find it easier to believe in God than in the incarnation and the resurrection.) This gives my love of God an indispensable stake in the historical credibility of the Gospels. For as long as I have thought about it, it has always been clear to me that, for Christian faith to be true, the Jesus Christians find in the Gospels must be the real Jesus . . .

Does this mean that Bauckham invariably knows that he expects to find his faith confirmed in all of his studies? He does at least permit himself to change his mind on a number of issues so no-one can say he does not courageously follow wherever the evidence leads . . . Coincidentally the three changes of mind that he admits to having arisen out of his studies have all been in the direction of establishing the “truth” of a more conservative and traditional view of his faith: END_OF_DOCUMENT_TOKEN_TO_BE_REPLACED

Libby Anne had a somewhat similar religious background to mine and has consequently acquired, like me, an enhanced ability to notice wherever cultish or tribal or fundamentalist types of behaviours and attitudes surface in other (supposedly religion-free) areas of society. Back in March this year and in the wake of the Craig Hicks’ murders of three Muslims she wrote You Can Count Me out of Atheist Tribalism. She writes:

There are a lot of differences between the Chapel Hill killings and the Charlie Hebdo killings, but both demonstrate what hatred and demonization of “the other” can lead to. I would think we should all be able to admit this and condemn it—right? Wrong. I’m absolutely flummoxed by Sam Harris’s insistence that crimes committed by atheists by definition have nothing to do with their beliefs.

I have bolded a section below because it so perfectly mirrors my own experience:

To put it simply, atheists who are quick to blame terrorism committed by Muslim individuals on Islam and just as quick to excuse atheism from any role in atrocities committed by atheists are using a glaring double standard.

Unfortunately, I have a lot of personal experience with these sorts of double standards. I grew up in an atmosphere where Christian atrocities were dismissed through ample use of the No True Scotsman fallacy. In fact, I believed that by definition, a Christian would not commit atrocities, and that if someone claiming to be Christian did so, they must not be truly Christian. It was a very handy way to excerpt my in-group from criticism while eagerly lobbing criticism at everyone outside of it.

I, for one, am not eager to repeat that.

And she concludes — with the same reason I have come to distance myself in recent years from some sort of fan-following of any New Atheist popularizer:

I didn’t leave one tribe, with its demonization of other groups and tribes, ample use of the No True Scotsman fallacy, and insistence on valuing in-group loyalty above all else, to join another tribe doing the exact same thing.

Yesterday, in the wake of Christopher Harper-Mercer’s killing spree, it was Ashley Miller‘s turn. Taking her cue from Chris Hitchins’ book title God Is Not Great; How Religion Poisons Everything Ashley has written Atheist Tribalism Poisons Everything.  END_OF_DOCUMENT_TOKEN_TO_BE_REPLACED