Other scholars in this series: Dale Allison, Richard Bauckham, Scot McKnight. To appreciate the coverage of Dunn’s works see a selected list in Wikipedia.

James D.G. Dunn’s view of the historical Jesus was one of five sought for an exchange of views in The Historical Jesus: Five Views, edited by James K. Beilby and Paul Rhodes Eddy. The others were Robert M. Price, John Dominic Crossan, Luke Timothy Johnson and Darrel L. Bock. Dunn’s earliest forays into the historical Jesus were in response to a controversial 1984 London Weekend Television series Jesus: The Evidence in which doubts were raised against the traditional Christian narrative and even the existence of Jesus. The idea that controversial views should be aired publicly without being simultaneously framed in the condemnation and scorn they find among conventional Christian scholars was too much for Dunn and other critics. Dunn himself reveals his own poor view of the intelligence of the general public in an overwhelmingly Christian nation led by mainstream clergy when he wrote in his preface to his response to the program, The Evidence for Jesus (1985)

From what they saw and heard, viewers who lacked training in biblical studies or theology were unable to distinguish be­tween the weightier and the less weighty opinions. They were given too little advice as to whether what was projected was accepted by the majority of scholars in this field or only by a lone voice resisting the larger consensus. Of course, scholarship does not and should not pro­ceed by majority vote! One scholar in a hundred may be right, and the remaining ninety-nine wrong. But when lay people are being exposed to the claims of scholarship, they at least have a right to know how well these claims have been received by other scholars. 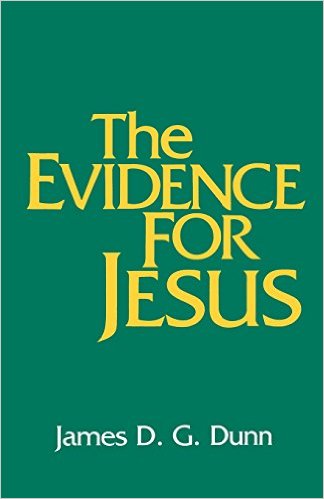 In fact there was ample follow up to the original TV program to leave no doubt in anyone’s mind about where mainstream biblical scholars stood. As another scholar, Howard Clark Kee, explains in his Foreword to Dunn’s book,

British television offered a follow-up series in an attempt to give more moderate biblical scholars a chance to present their side of the case and to respond to the radicals. As a result the controversy was, if anything, extended and enlarged. Coming in conjunction with the heated debate that arose when a theologian with controversial views on the virgin birth and resurrection was consecrated a Bishop of the Church of England, thoughtful people—in and out of the churches— raised serious questions: Is the traditional faith of the church obsolete? Is the church not being honest with the public? Have such recent discoveries as the Dead Sea Scrolls and the Gnostic library in Egypt discredited the Gospel picture of Jesus as we have known it? Is the evidence not being candidly presented and discussed?

In other words, the public was well and truly aware that most scholars did not accept views that radically questioned Christian origins. But what was under threat was public confidence in the intellectual integrity of the bulk of those theologians. Damage control was called for and James Dunn stepped in to do his part to bolster the confidence of the devout.

Fortunately, there were scholarly and churchly leaders across Great Britain who raised serious and responsible challenges to these radical conclusions. Among the latter was James D. G. Dunn, Professor of Divinity at the University of Durham in northern England, an active churchman and a prolific writer. Professor Dunn is personally interested in the daily life and faith aspects of Christianity as well as in its intellectual dimensions. It was appropriate, therefore, that the Durham Council of Churches should ask him to give a series of lectures to an interchurch audience on the same topic, “Jesus: The Evidence” . . . . (Kee, writing in the Foreword about the origin of the book)

Or in Dunn’s own words:

One of the attractive features of Durham was an active Council of Churches, which Meta and I helped to revive . . . as Churches Together in Durham. Initial involvement was a sequence of lectures in response to a London Weekend Television series entitled Jesus: the Evidence (1984), a series which had proved to be very unbalanced.  The puzzlement and distress caused by the series prompted me to offer a four-lecture response, better rooted in the New Testament evidence and more truly reflected of the range of scholarly opinion. These were published as as The Evidence for Jesus. . . .

(2015-09-01). I (Still) Believe: Leading Bible Scholars Share Their Stories of Faith and Scholarship. Zondervan. Kindle Edition.   —  (my own bolding and formatting in all quotations)

So Dunn assures readers from reading the gospel narratives themselves that beneath the theological elaboration is indeed “historically reliable” and genuine “historical information” that “clearly” derived from oral traditions going back to the earliest eyewitnesses of Jesus himself. Even the evidence for the resurrection, the “fact” of the empty tomb and the transformation of the disciples after claiming to have witnessed the resurrected Jesus, must leave any well meaning jury with the conclusion that the gospel stories are “attempts to say something which goes beyond human description” and that “there must have been powerful and compelling factors which resulted in the first Christian confession, ‘ God has raised Jesus from the dead’!” (p. 76) END_OF_DOCUMENT_TOKEN_TO_BE_REPLACED