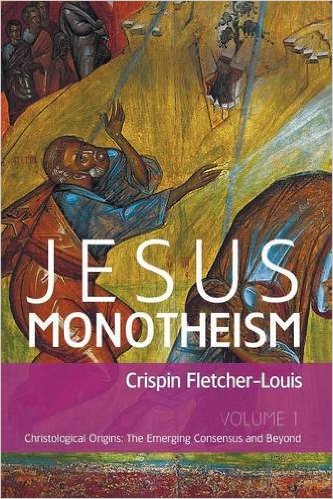 Adam is the image made by God. God made him in “his” image and in “his” likeness. The angels were commanded to worship the image of God.

Worship of Adam did not imply that Adam was a god himself. Like all or most pagan images that were representatives of the deity Adam was worshiped by most angels as the way to worship God. To stand up like Shadrach, Meshach and Adednego in this instance was to become the enemy of God, Satan.

Here is the key section from the Life of Adam and Eve (Fletcher-Louis rejects the title “Apocalypse of Moses by which it is more commonly known):

xii 1 And with a heavy sigh, the devil spake: ‘O Adam! all my hostility, envy, and sorrow is for thee, since it is for thee that I have been expelled from my glory, which I possessed in the heavens

2 in the midst of the angels and for thee was I cast out in the earth.’ Adam answered, ‘What dost

3 thou tell me? What have I done to thee or what is my fault against thee? Seeing that thou hast received no harm or injury from us, why dost thou pursue us?’

xiii 1 The devil replied, ‘Adam, what dost thou tell me? It is for thy sake that I have been hurled

2 from that place. When thou wast formed. I was hurled out of the presence of God and banished from the company of the angels. When God blew into thee the breath of life and thy face and likeness was made in the image of God, Michael also brought thee and made (us) worship thee in the sight of God; and God the Lord spake: Here is Adam. I have made thee in our image and likeness.‘

xiv 1 And Michael went out and called all the angels saying:

‘Worship the image of God as the Lord God hath commanded.‘

And Michael himself worshipped first; then he called me and said: ‘Worship the image of God

3 the Lord.’ And I answered, ‘I have no (need) to worship Adam.’ And since Michael kept urging me to worship, I said to him, ‘Why dost thou urge me? I will not worship an inferior and younger being (than I). I am his senior in the Creation, before he was made was I already made. It is his duty to worship me.’

xv 1,2 When the angels, who were under me, heard this, they refused to worship him. And Michael saith, ‘Worship the image of God, but if thou wilt not worship him, the Lord God will be wrath

3 with thee.’ And I said, ‘If He be wrath with me, I will set my seat above the stars of heaven and will be like the Highest.’

xvi 1 And God the Lord was wrath with me and banished me and my angels from our glory; and on

2 thy account were we expelled from our abodes into this world and hurled on the earth.

There are implications for Christology here — as you would expect from the title of the book. But again that’s for another post, too.

14 thoughts on “When God Commanded the Worship of Adam”