Skip to content
I disengaged from the question that was being asked, falling on the last resort of the scholarly scoundrel: “I’m just trying to figure out what really happened!” (Daniel Boyarin)

Thanks to Jim Davila‘s PaleoJudaica.com blog I see the JWeekly has published a lengthy article on one of my go-to scholars, Daniel Boyarin. 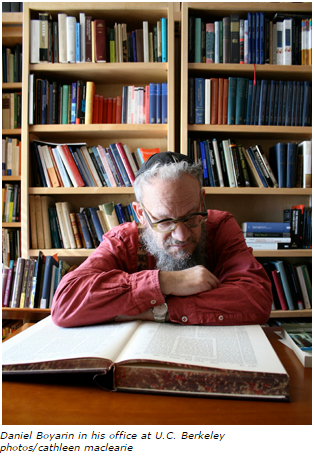 I’ve cited Boyarin in about a dozen posts on Vridar and will certainly refer to some of his works again. Not that I play “follow the leader” so much as I find him a most though-provoking and informative teacher: his works are always leading me back to study original sources and to read ever more widely among other scholarly works with which he engages. After I’ve finished one more round of this process I may find myself doubting some proposed point of his (I do not realize how painfully conservative I am till I read some of his radical views) but I will always be returning to his books for fresh perspectives and gateways to learning.

Some excerpts I enjoyed from the JWeekly article:

One of the true giants, an iconoclast

Today Boyarin, 68, is a world-class authority in his field — one of the true giants, in this country as well as in Israel. But he’s far from the typical Talmud scholar. He has a kippah on his head, yes, and is shomer Shabbos, but he’s also a confirmed anti-Zionist, a serious collector of fine kosher wines, and has an abiding interest in feminism and queer theory.

Daniel Boyarin is, in short, quite the iconoclast, even in a city that prides itself on defying the mainstream.

For 10 minutes being a Talmudic scholar was sexy

His scholarship is so vast that practically every graduate student in his field encounters it at some point, and he is so well-known in academia that a discussion about his views on a particular talmudic point was a running joke in the 2011 Israeli film “Footnote.”

“It was flattering, and it felt accurate to me,” Boyarin said of the movie banter. “I would have been upset if it were flattering and it felt inaccurate, but in those 30 seconds, they got me right. For five minutes I was the most famous talmudist in the world, and for 10 minutes, being a Talmud scholar was something sexy.”

“He has defined the field of rabbinics for over two decades,” said Deena Aranoff, assistant professor of medieval Jewish studies at Berkeley’s Graduate Theological Union. “The questions that he raises, and the way he frames the material, have become the questions and the framing for the field.”

And he has a particular interest in early Christianity, writing works about the apostle Paul and the Jewish aspects of Jesus.

“His genius is breathtaking,” said his colleague, Burton L. Visotzky, the Appleman Professor of Midrash and Interreligious Studies at the Jewish Theological Seminary in New York. “He has vision, insight and all of the tools that you want a critic to have. He’s an astonishing scholar.”

Despite his fame in the academic world, there’s a reason he is relatively unknown in the local Jewish community beyond Congregation Beth Israel, the Modern Orthodox synagogue in Berkeley he belonged to for many years: his politics on Israel. A supporter of Jewish Voice for Peace and the boycott, divestment and sanctions movement, Daniel Boyarin isn’t afraid to call himself an anti-Zionist.

“It took years before I could utter the words anti-Zionist,” he said. “It was like my tongue would stick to the roof of my mouth. But now, of course, it just trips off my tongue.”

Made to promise he would not become a rabbi

In fact, he said, [Jewish Theological Seminary of America in New York, the Conservative movement’s rabbinical school] accepted him on the condition he promise not to pursue a career in the rabbinate. “I had hair down to my shoulders, I was talking about mysticism and the Messiah, and Vietnam being an apocalyptic moment,” he said with a laugh.

A fundamental flaw at the heart of the enterprise

[Living in Israel….] “When I heard [then Minister of Defense] Yitzhak Rabin say ‘break their arms and legs’ [speaking about Palestinian demonstrators], I thought ‘There’s something wrong here.’ And when I talked to people about it, who told me it’s necessary to break the arms and legs of young teenage boys to support this project, then I felt that this project is rotten.”

That was the beginning of his disillusionment with Zionism. “The more I studied and looked at the discourse, the more I really came to believe it was not a question of right-wing Zionist versus left-wing Zionist. I realized that there is a fundamental flaw at the heart of the enterprise.”

One of his nightmares

Even though his sons had finished their army service by then, “one of the nightmares I had was that I would be at a demonstration somewhere on the West Bank and the cavalry would come and one of them would be one of my sons,” he said.

In an essay that appeared in the 2003 anthology “Wrestling with Zion: Progressive Jewish-American Responses to the Israeli-Palestinian Conflict,” he wrote: “It has been said by many Christians that Christianity died at Auschwitz, Treblinka and Sobibor. I fear — G-d forbid — that my Judaism may be dying at Nablus, Daheishe, Beteen (Beth El) and al-Khalil (Hebron).”

“If Daniel is anything, he loves to be cutting edge, and sometimes that means he’s really out there on the edge and people may not follow him,” said Visotzky, the JTS rabbi. “Virtually everything he’s written has attracted attention, though not necessarily agreement. If he writes a new book, people will read it because they want to know what he’s saying.

Why lecture on Paul

And then there’s his work on what he calls “the Jewish sect formerly known as Christianity.” He said 600 people showed up to hear him gave his paper on Paul at the Society of Biblical Literature conference in the early ’90s. He began the talk by saying, “You’re probably wondering what a Talmud scholar is doing lecturing on Paul. Last year, here, I lectured on the Talmud —12 people came, and six of them left.”