Hector Avalos has an article in the Ames Tribune on Christmas TV shows. He identifies that “puke” moment that hits me when I watch them:

On the more traditional end, we find “‘Twas the Night Before Christmas” (1974). The story features a family of mice, one of whose members is Albert, a precocious youngster who is a hard-nosed believer in science and a virtual atheist.

Albert wrote a letter calling Santa a fraudulent myth. As a result, Santa Claus retaliates by threatening to stay away from Albert’s town on Christmas Eve. When Albert’s father discovers what he has done, he tells Albert that he should trust his heart, not his head. After Albert apologizes, Santa forgives the town, and shows up on schedule.

The message emphasizes that faith and looking with “the heart” are actually better instruments to understand the world, and a purely scientific approach is narrow-minded.

Yuck! I hate that sort of thing in those movies. They are so maudlin-good they are evil.

Then there’s the honest reply to that infamous letter . . . .

No, Virginia, there is no Santa Claus . . . . .
END_OF_DOCUMENT_TOKEN_TO_BE_REPLACED 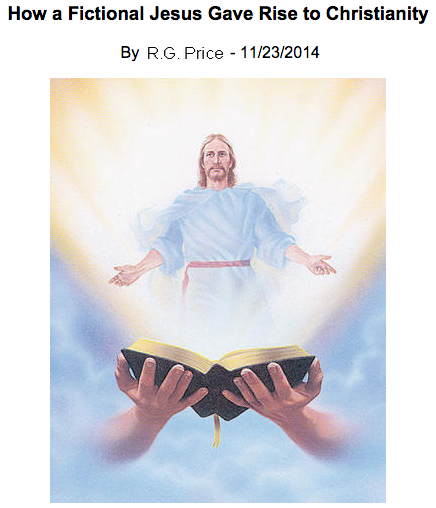 I have just completed reading How a Fictional Jesus Gave Rise to Christianity, a web article written by R. G. Price. It begins:

Having written several pieces on the historicity of Jesus (Jesus Myth – The Case Against Historical Christ, Jesus Myth Part II – Follow-up, Commentary, and Expansion, The Gospel of Mark as Reaction and Allegory), I think it is of critical importance to not simply cast doubt on the historical existence of Jesus, but to actually put forward plausible explanations for the development of early Christian writings and how the widespread belief in a real life Jesus was established. This piece builds on the evidence laid out in my prior writings and ties everything together into a cohesive explanation for the origins of belief in a human Jesus and the development of early Christian history.

Price is not merely attempting to raise doubts about the historicity of Jesus. He hopes to prove “beyond reasonable doubt” that there never was a real Jesus at the start of Christianity. He does not focus on the letters of Paul but rather on the Gospels themselves as his primary evidence. Since his argument examines the Gospel narratives and their literary sources he is led to discard even the concept of the “Jesus myth” and replace it with the “Jesus fiction”.

There is little I find myself disagreeing with in Price’s work. Or rather, I think I agree with almost all of it. Readers of past posts on Vridar will recognize some of the themes Price addresses: the literary indebtedness of Gospel narratives to Old Testament stories; the association of the Gospel of Mark with the Jewish War (compare earlier posts here addressing Clarke Owens’ “Son of Yahweh”. Price appears to have absorbed this sort of material from both his own analysis and a wide range of reading. My initial reaction was disappointment in the absence of citations but I soon learned that I was reading a print-out of a draft essay and that Price was at the time editing his work and adding citations.

While on the subject of negatives — there is one minor one I’d like to see Price address. His piece could flow more easily if he could avoid awkward language like “the Gospel called Mark” instead of more simply “Mark’s Gospel”. I can understand the desire to be particular but this sort of thing can be explained at the outset by simply informing readers that the colloquial use throughout does not represent a known fact.

I myself have been moving towards the view that the Gospel of Mark was structured around themes closely related to the (or at least “a”) Jewish War (strengthened by my reading of both Hanhart and Owens) so it is interesting to see Price strongly arguing a similar point. Price argues that the literary allusions are not simply “there” but that he can show how they acquire explanatory power or meaning when understood in the context of the recent Jewish War.  END_OF_DOCUMENT_TOKEN_TO_BE_REPLACED