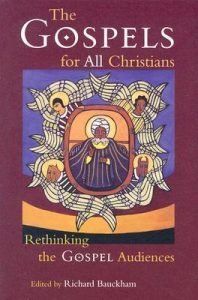 What grounds does Richard Bauckham offer for us to think that the gospels were not written for local churches but rather for “all Christians” in all churches everywhere? Or at least a very generalized Christian audience wherever its churches were to be found. END_OF_DOCUMENT_TOKEN_TO_BE_REPLACED

I don’t know if Jerry will permit the following words appear on his blog. He has trashed my comments in the past. I submitted the comment in response to Heather Hastie on female genital mutilation: Is it Islamic?  I avoided specific reference to FGM and spoke instead more generally of barbaric practices. (We all know the real instigation of all that has contributed to the current outrage is 9/11 and that FGM is just one more opportunity to kick Islam to the exclusion of other religions.)

Am I permitted to post an alternative view here?

Associate professor of Religious Studies at Iowa State University and author of The End of Biblical Studies and Fighting Words, Hector Avalos, shows us how ALL religions that are grounded in unverifiable beliefs are at various times and places susceptible to being used to justify a host of barbaric behaviours.

By focussing on just the one religion that is being used by certain peoples in certain times and places and with certain experiences to justify evils we are focusing on the symptoms and missing the real reason for the problems.

No-one blames Christianity or ancestor worship for the barbarisms that drenched pre-Communist China in blood even though these beliefs were used to justify all sorts of hideous tortures and cruelties. We did not always have terrorist Muslims crazed to kill Westerners.

There are reasons that prompt people to flick switches and use religion to justify horrors. The common factor in all of these contingencies is the way we give social respectability to belief systems that are unverifiable.

If we don’t recognize the causes (the real causes) of religious violence and barbarism we are not going to help progress civilized values but could in fact be contributing to the ignorance and chaos.