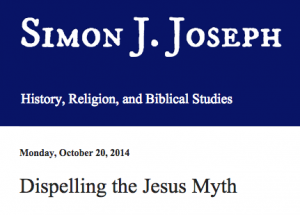 James McGrath directs readers interested in learning more about mythicism to read Dispelling the Jesus Myth, a blogpost by Simon J. Joseph. So I did. Simon’s post introduces nothing new into the discussion. It is the same litany of objections to mythicism one has run across countless times before so I was about to move on and forget about it when it occurred to me that the reason we keep reading these same weary objections may to some extent be because it is too easy to simply ignore them. So for what it’s worth this time I’m taking the time to respond to Simon’s post.

(“For what it’s worth” . . . . One does wonder, especially given the all too commonly observed failure of scholars who protest the loudest against mythicism to bother even to find out what the arguments of mythicists actually are.)

Simon Joseph’s first criticism is that

For many, Jesus-Mythicism serves as an effective tool in discrediting the Cornerstone of . . . “Christianity”. Most mythicists are not interested in participating in Jesus Research; they want to debunk it.

From the outset we have here a criticism that is going to shut down any serious thought of genuinely looking into mythicist arguments. No doubt one will find many people among those declaring Jesus never to have existed who want to debunk Christianity. I posted about one such author only a few days ago. I also pointed out that polemics are not what seriously argued mythicism is about.

I have posted here at length on the views of Thomas L. Brodie whose mythicist views have served only to enhance his appreciation of Christianity.

Tom Harpur similarly speaks very positively about Christianity as a direct result, not in spite of, his mythicist view of Jesus Christ.

Timothy Freke and Peter Gandy likewise object only to fundamentalist or literal interpretations of the Gospels — a criticism shared by a significant number of non-mythicist liberal Christians such as John Shelby Spong.)

Robert M. Price has also spoken positively of Christianity since coming to his conclusion that Jesus had no historical existence.

A little while ago I presented in detail the views of an earlier mythicist, Paul-Louis Couchoud whose adoration of Christianity led him to write panegyrics to the faith. See, for example, his conclusion to The Creation of Christ.

Herman Detering remains a church pastor, I believe. I don’t believe anyone ever read a single “debunking” word on Christianity in anything published by Alvar Ellegård and G. A. Wells.

And I suspect names like Kurt Noll, Philip Davies and Arthur Droge who are not mythicists but have expressed an interest in seeing mythicist views addressed more seriously are not motivated by any wish to debunk anything. Thomas L. Thompson appears to hold views that I have also come to embrace with respect to the mythicist question. Debunking and discrediting Christianity are nowhere on the radar in any of his publications.

Very likely those who are the most seriously interested in mythicism are primarily interested in the historical question per se and are not likely to risk such a serious enquiry with polemical distractions. There are some exceptions, of course, but such names have certainly not featured often or always positively on this blog.

Yet the myth persists that “most mythicists” or “many” of them are motivated by a desire to debunk. “Most” and “many” are relative terms. I think I have demonstrated from the above that a good many mythicist authors are actually positive towards Christianity. Most mythicist authors, I would suggest (and see the Who’s Who tables to get some rough idea of the relative numbers), avoid any anti-Christian polemic in their publications.

So why do we regularly read this little bit of ad hominem? END_OF_DOCUMENT_TOKEN_TO_BE_REPLACED