My copy of Jesus, Criteria, and the Demise of Authenticity arrived today. I had the impression that there is some curiosity “in internet land” as to whether this work will be of interest among Christ Myth theorists. If I am not judging too hastily, I will say, “No”. Everyone knows that the criteria used to establish “historicity” of a saying or deed of Jesus are shot through with logical fallacies. This has surely been well enough publicized by many mainstream and minorstream scholars by now. Or perhaps I don’t wear the same blinkers as many theologians who confuse apologetics with historical research.

The book does not address historicity. Note the title. It says “Authenticity”, not “historicity”.

There’s an interesting Introduction by Anthony Le Donne that I’d like to post on some time. He surveys the history, especially “American” meaning U.S. history, of historical research related to the Bible and Jesus. It reminds me of the title of a book by Ashleigh Brilliant, I Have Abandoned My Search for Truth and Am Now Looking for a Good Fantasy. (Ashleigh Brilliant, I have read, is always on the warpath against anyone who uses one of his epigrams without first paying him for the privilege, so I hope he doesn’t object to my freely promoting one of his many published titles for him here instead.)

I have long looked forward to doing posts on historiography again, and in the process place the postmodernist historiography in its context. In that series I would certainly refer to Anthony Le Donne’s earlier book, Historical Jesus: What Can We Know and How Can We Know It?. That little volume is a handbook for theologians on how to save or redirect a new quest for the “historical Jesus” through a postmodernist approach to sources.
It contains a foreword by Dale C. Allison Jr. He was the scholar, some will recall, cited by James McGrath as being one of the pioneers responsible for paving the way for a whole new revolution in historical studies across the board. (See my post, New Testament Scholars Are Pioneers In Historical Methods.) McGrath learned from Allison the following:

Even fabricated material may provide a true sense of the gist of what Jesus was about, however inauthentic it may be as far as the specific details are concerned. (Review of Dale Allison, Constructing Jesus) 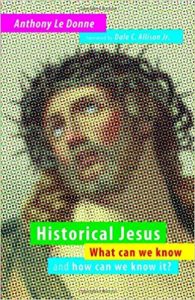 Here is one way to illustrate how postmodernist historical research into the ‘historical Jesus’ works. The illustration is taken from Anthony Le Donne’s Historical Jesus. Le Donne spices up the explanation with geometric and arboreal diagrams and phrases like “moving on from positivism”, “patterns of memory”, “thought-categories”, “memory refractions” and “spiraling memory traditions”. This is a Good Thing™, because it shields the reader from direct exposure to the befuddling logical circuitry behind it all.

Next, place these two “traditions” 5 centimeters apart on a sheet of plain white paper on a flat table.

Now, with some geometry tools and an HB pencil, draw straight lines from those two “traditions” to a third point so as to form an equilateral triangle. (Don’t worry about the powder. That will add to the final effect.)

Now erase those straight lines and replace them with spirals. (Replace the scattered authenticity powder.)

You have now recreated the original memory refraction that was further refracted through spirals to reach our extant contradictory evidence.

Finally, focus one eye on the start of each of the spirals, roll each eye back through the spirals to their other point, and you will come to understand how we arrived at our extant contradictory evidence.

Okay, that was tongue in cheek. But it is not far off what Le Donne writes anyway, seriously. Only in Theology Departments!

The author of Mark makes the point that in bringing this testimony these “false” witnesses were inconsistent. That is, he does not exactly deny the charge, but only says there were inconsistencies in what they were saying.

The author of John, however, explains to readers that there was nothing false to taint the saying, but that Jesus was speaking metaphorically of the temple of his body.

So we have a common tradition that has been “counter-remembered” in two quite different ways.

Now this is not as simple as it sounds. What we are seeing here is the way authors made the past memory or tradition relevant for their own times and circumstances. You thought that’s what people typically do when they remember? That memories are shaped over time according to changing needs and desires? Maybe, but did you know that a technical term for that is “memory refraction”. Refraction, recall, has many geometric properties. So this is a very complex scholarly discussion we are undertaking here.

Extract some of this from Mark 13:1-2 where Jesus tells his disciples that one day not one stone of the buildings they were admiring will be left on top of another. We also know that “there can be little doubt that Jesus was commonly remembered by” the title “Son of Man” that we first meet in the apocalyptic Book of Daniel (p. 125). Thus we can conclude that Jesus was an apocalyptic prophet. This adds likelihood to Jesus saying something like we read in both Mark 14 and John 2.

Next, when we read that Jesus overthrew the tables of the money-changers in the Temple, “keep in mind that it is the exchange of money that represents Rome’s relationship to the temple priesthood.” (p. 126) It follows, then, that what Jesus was really doing was carrying out the program of the modern Left by “specifically targeting the institution that keeps the elite in power.” Of course.

And never forget good old Mr Embarrassment. Obviously the saying proved embarrassing to these authors. That’s surely why they either explained the charge was false in the sense of containing inconsistencies or was merely metaphorical. Obviously.

Now, understand that none of this proves that Jesus really did predict the Temple’s doom. We can’t say that. It is “entirely possible” that this prediction was “invented by Christian storytellers after the historical temple fell in 70 CE.”

So where does this leave the postmodern historian?

Even so, there is good reason to believe that the historical Jesus did, in fact, make such a claim and that he viewed the temple in apocalyptic categories. If Jesus did view his mission through an apocalyptic worldview, it is the historian’s responsibility to interpret plausibly Jesus’ aspirations and motives with this in mind. Jesus’ apocalyptic teaching likely evoked thought-categories (in this case narratives) by which his identity was perceived. (p. 126)

What a fun party mind-game!

It is entirely possible the event or saying never happened!

But we can imagine through general awareness of the conditions of the time that such an event is plausible and therefore it is possible that it happened. The background information adds plausibility to this enables us to say we have “good reason” to think it could have happened anyway.

So IF it happened, what might we imagine the consequences could have been?

Ah, there we have it — our historical reconstruction! (Are scholar theologians really on the same pay scales as other researchers?)

I rushed ahead of myself there. Le Donne actually pauses to ask:

But how does the historian responsibly move from Mark’s story to the plausible origins of this story in memory or fiction?

I’m glad he threw in that “responsible” word there. One does need reminding that this is a seriously responsible exercise.

Le Donne bends over backwards to make the complexities clear:

I will answer this question by demonstrating “historical triangulation.”

Le Donne explains that to be a responsible historian with an If question, one has to “triangulate historical memory“.

A layman might naively think that all we have to do is try to find some common factors in the contradictory accounts and ask whether those common details are the nucleus of an original saying from which the other two arose. But that sort of thinking will dissolve a beautiful triangular model before our eyes that is about to see spirals replace the arms.

(A layman might even wonder if one saying was nothing more than a direct re-interpretation of the other — some scholars do, after all, think John knew and re-wrote Mark — but to raise that possibility at this juncture would be disruptive and invite expulsion from class.)

The spirals represent the way memories and stories change and reiterate and re-editorialize and undergo various interpretations, etc in the minds of different people and communities according to their needs of the time. Important to keep the spirals in mind lest we forget such rocket-science.

Le Donne now brings in the arboreal diagram, a tree-trunk with several branches, decorated with rectangles and ovals and labelled with eight different stages in order to illustrate for us how two divergent sayings might be traced to an earlier saying that is different from both.

So what was this common seed?

By determining the most likely single cause that best explains both branches, the historian can make a historical claim with confidence. (p. 130)

This is getting quite exciting. First we established that it may not have happened at all. But then we figured out on general principles and other extrapolations that we have “good reason” to think it happened anyway. So IF it happened, we next imagine what might have been the most likely outcomes. We now try to rationalize a likely explanation for our evidence. This is called being able to make historical claims with confidence.

In this case, the confident claim is that the original claim of Jesus was that he had “divine authority to destroy the temple and rebuild it” — meaning hypothetically, if he so wished.

Please do not miss the beautiful irony here: it is when the editors of these stories disagree the most that we can most confidently postulate historical memory! The fact that the memories of Jesus were refracted (bent in different directions) is the very fact that allows the historian to postulate the historical event. Like a telescope lens which bends light so that an invisible object can be approximately seen, refracted memories of Jesus allow us to tell the story of the historical Jesus. (pp. 130-131, my bolding here and in all above quotations)

I want to believe, help thou my unbelief

Forget direct evidence. We only need to “believe”. That is,

I still suspect John just adapted Mark to suit his own theological agenda. 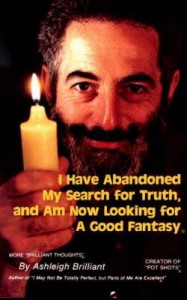 10 thoughts on “Searching for a Good Fantasy: A Postmodernist’s Historical Jesus”