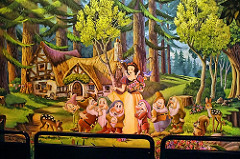 Christ, meaning Messiah, is, of course, not a proper name but a title, like King or High Priest.

Yet Paul’s letters use Christ as if it is a proper name for Jesus.

Dunn writes in response to Price (The Historical Jesus: Five Views) what is well known to all scholars:

As often noted, the fact that Christ was more or less a proper name (Jesus Christ) by the time of Paul (within twenty to twenty-five years of Jesus’ death) must indicate that messianic status had already been ascribed to this Jesus for such a long time that the titular significance of Christ (Messiah) had largely faded. (p. 96)

What is more rarely discussed is the possibility that Jesus, meaning Saviour, is also a personal name that originated as a title. (I know Jesus/Joshua is a common personal name; this post is addressing the happy coincidence that it was bestowed on the one who epitomized its meaning in the Christian myth and narrative.)

Reading the gospel narratives entitles us to be reminded sometimes of Walt Disney’s seven dwarfs. All of their names are “titular” or at least character-role labels: Grumpy, Sleepy, Bashful, Happy, Sneezy, Sleepy, Dopey.

Compare Peter, the rock on which the church was built (or in Mark’s Gospel the rocky soil of the parable on which it was not); Jairus, father of the girl awakened from “sleep”, meaning Awakened or Enlightened; Barabbas, meaning Son of the Father, being the substitute for the real Son of the Father; Judas, the namesake of the Jews who betrayed their saviour; John the Baptist, of whom Joseph Campbell remarked on the coincidence of finding at Jordan an individual who bore the name of the Mesopotamian god (Ea of Water, Oannes) associated with the ritual he taught; the plays on the different Simons (one Simon taught to take up his cross but failed, another Simon stepped in); etc.

— Jacob, Joseph and Judah are three of the most prominent of Israelite patriarchs, and Simeon, too, is strongly associated in this status with Judah. As Paul Fredriksen remarks:

(See also the names of the 12 apostles.)

So wasn’t it a lucky coincidence that Mr and Miss (later Mrs) Joseph’n’Mary decided on Saviour (=Jesus) out of all the names in their baby-name book.

I guess when you look at the whole constellation of remarkable name coincidences it only goes to show that a guiding intelligence, or a pool of intelligences, lay behind the show’s cast.

So the argument that Dunn was objecting to I find plausible. Price was addressing the pre-Pauline hymn in which the most straightforward reading is that Jesus was the name bestowed after his death and resurrection:

Your attitude should be the same as that of Christ Jesus:
Who, being in very nature God,
did not consider equality with God something to be grasped,
but made himself nothing,
taking the very nature of a servant,
being made in human likeness.

And being found in appearance as a man,
he humbled himself
and became obedient to death—
even death on a cross!

Therefore God exalted him to the highest place
and gave him the name that is above every name,
that at the name of Jesus every knee should bow,
in heaven and on earth and under the earth,
and every tongue confess that Jesus Christ is Lord,
to the glory of God the Father

When you read this without any Gospel narrative presuppositions (and this letter and hymn was composed long before any of the Gospels, most scholars I believe would agree) then its “plain straightforward” meaning is that Jesus was given this particular name after his exaltation into the highest place in heaven after his death and resurrection.

Finally, though the Epistles name the Christian savior Jesus, it is quite possible, as Paul Couchoud suggested long ago, that they attest to an even earlier stage of belief in which the savior received the honorific name Jesus only as of his postmortem exaltation. For Philippians 2:9-11, read without theological embarrassment, seems to intend that it was that name, exalted above all other names, that the savior received, not the title kyrios [Lord]. Every voice acclaiming him Lord is paralleled with every knee bowing to him, both to occur at the mention of this new name, Jesus, now bestowed upon him. (p. 64)

But when the straightforward reading embarrasses belief in the traditional Gospel narrative, Dunn will not allow it. He writes:

The name “Jesus” is hardly to be classified as “the name that is above every name” (Phil 2:9-10), so it hardly provides evidence that the name Jesus first emerged in relation to the putative exaltation of some previously unknown figure. . . . . On the contrary, it confirms that Jesus was the well enough known name of the one now widely recognized (in Pauline circles) as the Messiah. (p. 96)

No, the hymn does not confirm that at all. It says that God gave the saviour this name at his exaltation in heaven, and it was at that name that all creatures should henceforth bow. These couple of verses do raise the possibility that this is what was originally meant.

(Note also, by the way, that Dunn fails to grasp Price’s specific argument here — Price does not suggest, as Dunn seems to think, that the name was foisted on “some previously unknown figure.”)

So when Dunn faults Price’s point here for being an “implausible” and “disappointing” argument, he is failing to address the merits or logic of the argument itself. He is simply saying, in a scholarly way, “that’s dumb”. He may be writing in a manner that passes for scholarly, but the content of his rebuttal contains nothing by way of a logical or evidence-based counter-argument.

I suggest that the fact that “Christ” is attached to Jesus as a personal name even though it is really a title, and the fact that so many names in the Gospels can be shown to have some symbolic functions, widens the plausibility that Jesus, meaning Saviour, was also originally a function, a role, that indicated a divine being who was later personified in gospel narratives.

The author of the Epistle to the Hebrews also appears to have found the name Jesus (Joshua) happily as symbolic as Snow White when he could urge spiritual Christians to “enter the rest” that their physical “forebear” had failed to enter under “Joshua/Jesus” (Hebrews 3-4).

None of this is meant to argue that Jesus’ name definitely arose in this way. But the possibility that it did is surely not as implausible as Dunn complains.

0 thoughts on “Jesus Christ: Maybe BOTH names are titular? (Dunn on Price, again, too)”