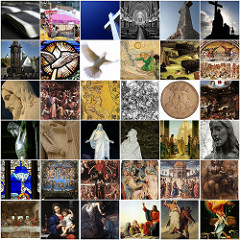 It is impossible not to smile a little at the quaint, anonymous post Does no one love Jesus anymore? on the new Sheffield Biblical Studies blog.

The poster laments that “less (sic) people are interested in historical Jesus studies than in previous years” and asks what cultural factors might be at play to explain this. It links, by way of some assistant discussion starter, to Scot McKnight post in Christianity Today, originally posted April 2010. (My little discussion of this article for what it’s worth is kept here.)

On the first point, there is nothing surprising about this. It is the normal fact of projection we are all inclined to in relation to any person we admire or make a focus of our lives. It doesn’t apply only to Jesus historians. Many historians in many nonbiblical fields have been found guilty of interpreting the world through their own personal politics, or their own psyches. This works at the wider cultural level, too. Ages of imperialism have tended to interpret past heroes or empires as exemplars for their own. In daily life we tend to see or find (even if only in our own imaginations) characteristics similar to ourselves in people we like.

The relevance of this for historians is to be able to recognize the proclivity and acknowledge it in one’s writings, and making allowances for it as much as possible.

But there is a deeper problem here for HJ studies that goes beyond normal biases among historians.

Historians know Bismarck and Alexander were leaders of states or political powers. They know David Hume and Socrates were philosophers. They know Nat Turner and Spartacus were rebel slaves. But they don’t know who or what Jesus was.

Albert Schweitzer understood Jesus as an apocalyptic Jesus. In the latest quest, Sanders’s Jesus is an eschatological prophet; Crossan’s Jesus is a Mediterranean peasant cynic full of wit and critical of the Establishment; Borg’s Jesus is a mystical genius; Wright’s Jesus is an end-of-the-exile messianic prophet who believed he was God returning to Zion. We could go on, but we have made our point: Historical Jesus scholars reconstruct what Jesus was really like and orient their faith around that reconstruction. (Scot McKnight: The Jesus We’ll Never Know)

No, Scot McKnight’s last sentence there does not encapsulate the problem he has raised in the previous sentences. HJ scholars don’t know who or what Jesus was — not simply “what he was really like”!

It is actually misleading to say that they don’t know what he “was really like”. Such a claim presupposes you know at least who or what he was to begin with. You may not know what your father “was really like” if for some reason you never knew him except through a kaleidoscope of anecdotes. But you would at least know him as your father, as a musician, as one whose photo tells you he looked a bit like you. Knowing what X is “really like” presumes we have a clearly established identity of some form to begin with, and that this identity is grounded in unassailable evidence and grounds for belief.

But there is no such anchor for the HJ quest. How can one begin to find what Jesus “was really like” when we have no way of establishing who or what — or even if — Jesus was to begin with?

It is logically impossible to begin to discover what someone was really like unless you can first establish some person’s identity at some level to begin with.

This leads to the second point, which goes to the heart of why HJ scholars have never and will never get anywhere:

Scot McKnight repeats the mantra in his CT article that NT scholars use the tools of all historians in other fields (e.g. criteria of double dissimilarity), but I have yet to see a single instance of an NT scholar actually demonstrating the truth of that claim. I have attempted to show in other posts that NT scholars do not follow normative historical methodology at all, despite their insistence to the contrary. The difference between what NT historians do and what others do is this:

This discussion and attempt to demonstrate just how different (and UNhistorical) NT “historical” methodologies are from nonbiblical historical methodologies has been done repeatedly, most fully in this older post, so I won’t elaborate any further here.

An online contact recently spoke of the elephant in the room among the comments on the Sheffield biblical studies blog. It is, or course, Steven Carr. He asks the most fundamental question of all: Where are the emperor’s clothes? But the scholarly NT historians maintain their vain dignity by pretending not to hear.

One commenter to the post speaks of the need to

develop an entirely new methodology based on historical plausibility. This will demand a phenomenal knowledge of the broad context in which the traditions evolved, including multiple ancient languages, understanding of literature and the whole writing of and reconstructing ‘history’….

The same commenter wrote of HJ studies that

It has also failed to produce a viable historical methodology. Vermes and Sanders made slight steps in the right direction but these have largely been ignored, dismissed or missed. But lo and behold, waiting in the wings is a paradigm shift. And I dare say no more… except bring on the REVOLUTION!

Paradigm shifts mentioned in the same room as Sanders and Vermes? Understanding “multiple ancient languages” will help do the trick? What I suspect is meant here is the laborious work of Maurice Casey “uncovering” the Aramaic sources for the Gospels! By understanding literature and the writing of ancient history I think is meant the ancient tendency to write biographies that included concocted stories about their subjects.

But the worst part is that the “revolution” in “historical methodology” is apparently to be based on “historical plausibility”. Gosh, even historical fiction — even ancient fiction — is plausible.

When I reviewed some of Sheffield NT historian James Crossley’s work against the rule of historical methods and standards of evidence that is set as the norm for all other (nonbiblical) histories, and that is, I think, even becoming the norm for “minimalist” OT scholars including some at Sheffield!, he was so flummoxed he could only say such a review was “bloody weird”. When I demonstrated to another NT historian that Sanders’ methodology is based entirely on the unsupported assumption that there was an historical Jesus to begin with, and that using his arguments to prove the existence of an HJ was circular reasoning, he withdrew from the discussion. (These are linked in post and comments here.)

Forget the revolution and the radically new. Let’s be reactionary and go right back to F. C. Baur who said anything is possible, but what is probable? This is the heart of Robert M. Price’s arguments in The Historical Jesus: Five Views — and what is probable is determined by the principle of analogy. If the life of Jesus looks like a myth, quacks like a myth, and there is no certificate from the Department of Independent Attestation attached to it saying otherwise, then . . .

10 thoughts on “The Clueless Search for the Historical Jesus”