We have been following Nanine Charbonnel’s view that the Jesus character we meet in the gospels was constructed entirely from ancient and well-understood Jewish literary-theological methods. In other words, the gospel figure of Jesus is most economically explained as a literary-theological construction of the evangelists (authors of the gospels) and that there were no oral traditions about a “historical Jesus” for those authors to draw upon.

In this post we continue the basis for creating Jesus as a human, a flesh and blood person, among God’s people, and how it came about that this human Jesus was simultaneously depicted as the Son of God, the Temple of God and “God with us”. We’ll take each of those items in turn. First, the Son of God…

Nanine Charbonnel [NC] proposes that as the people of God in the Jewish Scriptures are called the Son of God then it follows that Jesus, as the personification of God’s people (as covered in multiple earlier posts) is also called the Son of God. “Son of God” in Jewish thought of the time could have any one of a number of meanings: angels, the king of Israel, the people of Israel, righteous Israelites (Jubilees 1:24-25) and the royal messiah.

In the above paragraph I linked to the posts addressing NC’s reasons for seeing Jesus as a personification of the collective nation of Israel or Jewish people. NC cites the many biblical passages that oscillate between God’s son being the collective people of Israel and his singular son, the royal son of David:

We saw earlier in reference to the analysis of Leviticus by the anthropologist Mary Douglas that Jewish thought could identify the Temple, the Body (body of both collective Israel and the sacrificial animal) and the Law/Torah.

As a refresher . . . [this refresher is my own intrusion into NC’s discussion at this point] . . .

The tabernacle/temple as a model of the people of Israel:

The sacrificial animal, like the Temple or Tabernacle, is also a tripartite representation of the larger cosmos: placed first on the altar were the head and meat portions of the animal; next, the fat that covered the inner parts of the body; finally, the sexual organs, the representatives of reproduction, fertility, life.

The law itself is partitioned: the central commands in Leviticus, for example, consist of the moral code in chapter 19 (“Love thy neighbour as thyself”), hedged in by the commands for physical holiness; and then the means of atonement or cleansing. (That’s my own understanding derived from Mary Douglas’s analysis.)

God dwells in his temple, among his people, in his law/word. They are all the “place” of God. They are also the place of the Name (the unspoken name) of God.

When Jesus is said to be of David’s seed, or the son of David, the one evoked is Solomon, the builder of the Temple, the dwelling place for God. Recall 2 Samuel 7:5-7:

5 “Go and tell my servant David, ‘This is what the Lord says: Are you the one to build me a house to dwell in? 6 I have not dwelt in a house from the day I brought the Israelites up out of Egypt to this day. I have been moving from place to place with a tent as my dwelling. 7 Wherever I have moved with all the Israelites, did I ever say to any of their rulers whom I commanded to shepherd my people Israel, “Why have you not built me a house of cedar?”’

The tabernacle, then the stone temple, are thus a dwelling for God in the same sense that a house of flesh is a dwelling for his people. (Not cited by NC at this point, but recall the explicit identification in John 2:21.)

As the Son of God in the gospels Jesus is prophesied to “come to his temple” (from Malachi 3:1. Cf also Ezekiel 40-48.) We further know through the Dead Sea Scrolls that other Jewish sectarians identified those whom they deemed to be God’s community as the Temple.

As well as in the Qumran literature we find in 1 Enoch hopes for a new tabernacle (not made with human hands) to come from God and replace the old one. Christian literature does not stand alone here. In the Testament of Levi we read that the veil of the temple shall “be rent” so it cannot cover the shame of a sinner, which curiously seems to imply that the temple is thought of as a covering for a person.

We pointed above to the explicit identification of Jesus with the Temple in John 2:21. There are other “midrashic” associations making or at least strongly suggestive of the same or similar points. Thus in Luke 2 the newborn Jesus is presented at the Temple, and when he comes “of age” he is found in the Temple “doing his Father’s business.” One illustration I found particularly intriguing was NC’s drawing a parallel between the empty tomb and the “empty” Holy of Holies. The reason for my special interest is that the association overlaps with Karel Hanhart’s observation that the tomb “hewn from the rock” is a midrashic re-working of the destroyed temple in Isaiah 22 (see posts here, here and here.) We also have the temple veil being torn at the moment of Jesus’ death on the cross, thus again drawing an equivalence between the temple and the body of Jesus.

Finally, we have the name of the chief disciple, Peter, meaning “stone”, and as such a reminder that the followers of Jesus are said to be part of the building of a new temple. (There is no need to remind us of the meaning of cornerstone and its identification with Jesus.)

NC raises other allusions, practices and puns in biblical and related literature for consideration but I think what I have set out here is enough to make the point: that the idea that Jesus should be identified with the temple in the early Christian writings is not surprising in the context of Second Temple era thought.

The Dwelling of God among us

God’s displayed his presence when he came down to occupy the tabernacle and then the temple by a visible display of clouds — Exodus 40:34 and 1 Kings 8:10-11. In the gospels we read of Jesus “tabernacling” with his people, dwelling with them. He is not the tabernacle in this sense, but the divine presence itself — as we also read in Revelation 21:

10 And he carried me away in the Spirit to a mountain great and high, and showed me the Holy City, Jerusalem, coming down out of heaven from God. . . . 22 I did not see a temple in the city, because the Lord God Almighty and the Lamb are its temple.

2 I saw the Holy City, the new Jerusalem, coming down out of heaven from God, prepared as a bride beautifully dressed for her husband. 3 And I heard a loud voice from the throne saying, “Look! God’s dwelling place is now among the people, and he will dwell with them. They will be his people, and God himself will be with them and be their God.

The rabbinic — and commonly used — term for God’s dwelling, the divine presence, is Shekhinah. Indeed there are related overlaps between sayings attributed to Jesus and sayings found in later rabbinic literature, though attributed to Second Temple rabbis like Hillel. One of these is the saying that wherever two or more are gathered ‘in his name’ (Matthew 18:20) or to discuss Torah, there “dwells” God with them, or the Shekhinah resides with them (Pirkei Avot 3).

If the presence of God is seen in his “glory” (as per the verses in Exodus 40 and 1 Kings 8 linked above), we find glory associated with the coming and dwelling of Jesus (Luke 2:9 and John 17:22 — and John 2:11). In the synoptic gospels the glory of Jesus is seen most directly at the Transfiguration. There, Jesus is given a glory to excel both Moses (the law) and Elijah (the prophets).

Given Peter’s request to make “booths” or “tabernacles”, the Transfiguration is associated with the Festival of Tabernacles, the final festival of the year. This was the festival that commemorated Solomon’s inauguration of the Temple (1 Kings 8:2 and 2 Chron 7:8) and the first feast celebrated after the reconstruction of the Second Temple (Ezra 3:1-4). Zechariah is frequently quoted in the gospels so we can expect the evangelists were aware that the same book concludes with a proclamation that the same festival of Tabernacles will be celebrated in the utopian age to come (Zechariah 14:16-19).

The Greek word (skēnē) for the tabernacle (originally established as God’s dwelling or place of meeting Moses in the wilderness) and its various forms is liberally sprinkled throughout the New Testament writings. The skēnē, like Jesus, the “messiah”, was anointed. The skēnē was the place of mediation between God and his people. The right side of the body of Jesus shed water from the cross in John’s gospel and it was from the right side of Ezekiel’s temple that a life-giving river flowed (Ezekiel 47:1). Rabbinic traditions even equate the two sides of the originally created (androgynous) Adam with the sides of the Tabernacle (Bereishit Rabbah 8) — the second side being the one that brought forth Eve. 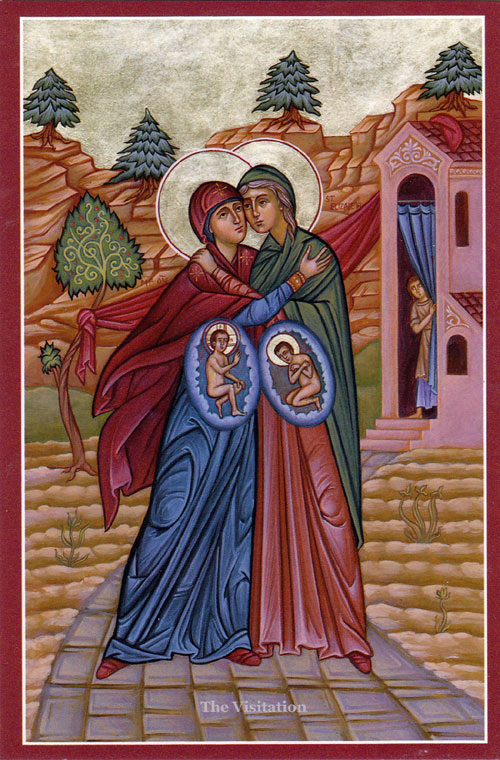 We are familiar enough with other passages in both the gospels and epistles that speak of God in Jesus dwelling with us, guiding us, even being our blood-sprinkled “mercy seat”. Jesus is regularly depicted as the fulfilment of, or the true and spiritual, law, presence, guide, and atonement.

Another “midrashic” reworking we may not have noticed is the meeting between Elizabeth and Mary when Mary is pregnant with Jesus. Elizabeth asks “how it is that the mother of the Lord has come to me” (Luke 1:43) as David asked with more resigned perplexity how it could be that the ark of the covenant could ever “come to me” (2 Samuel 6:9). Further, when we read in Luke 1:41 that Elizabeth’s baby in her womb (John) leaped in the presence of Jesus in Mary’s womb, we should be alert to the same Greek word — σκίρτησεν (eskirtēsen) — in the Septuagint of Genesis 25:22 is used to describe the feeling of Rebecca over two infants in her womb. Of course one of those infants was Esau and it is worth recalling that Jews of the Roman era applied the name Esau to Rome. NC suggests, therefore, that the subtle message in Luke 1 is that the infant in Mary’s womb is destined to overcome, eventually in the “end times”, the enmity between the two nations.

A form of the Greek word for tabernacle or tent, skēnē, is, moreover, directly said to refer to the human body — 2 Corinthians 5:1 :

NC cites other ancient Greek works using the same metaphor and a Byzantine author who used it to depict the empire itself.

Many of us are aware of another form of the word in John 1:14 where Jesus, by taking on flesh to live with his people, is said to have “tabernacled” or “tented” with them:

And the Word became flesh, and did tabernacle among us, and we beheld his glory, glory as of an only begotten of a father, full of grace and truth.

So what is the origin of “Yahweh who saves” (the meaning of the name Jesus) becoming flesh? The concept of a messiah and son of God being a personification of the temple and living in flesh (tabernacling) among his people is surely a very Jewish one and one that was surely a natural product of the Second Temple era and shortly after.