Skip to content
When you press questions on this, I sense a degree of belligerence; the more belligerent people become, the more worried I become.

I know the feeling all too well though in the contexts of other discussions. That quote comes from Sir Tim Clark, President of Emirates Airline (the company with the world’s largest fleet of Boeing 777s), responding to the official narrative of the disappearance of Malaysia Airlines flight MH370. The interview with German journalist Andreas Spaeth was originally published in Der Spiegel but the full transcript is also on The Sydney Morning Herald page.

I have just completed reading The Disappearing Act: The Impossible Case of MH370 by the French journalist Florence De Changy. The research into every facet of the narratives that have arisen to explain the disappearance of MH370 is refreshingly easy to read but above all thorough. The work is an exemplar of how to do serious research into current and historical events.

The inconsistencies and impossibilities that are bundled into the official narrative that the airliner crashed somewhere in the Indian Ocean are made mercilessly transparent. As Clark himself has said:

What do you think happened?

CLARK: My own view is that probably control was taken of that aeroplane, the events that happened during the course of its tracked flight will be anybody’s guess of who did what and when. I think we need to know who was on this aeroplane in the detail that obviously some people do know, we need to know what was in the hold of the aeroplane, in the detail we need to know, in a transparent manner. And we need to continue to press all those stake holders, that were and are involved in the analysis, in the assessment of what happened, for more information. Because heading an airline that operates the largest number of 777s in the world, I have a responsibility of knowing exactly what went on. I do not subscribe to the view that the aircraft, which is one of the most advanced in the world, has the most advanced avionic and communication platforms, needs to be improved so that we can introduce some kind of additional tracking system for an aeroplane that should never have been allowed to enter into a non-trackable situation.

What do you mean by that?

CLARK: The transponders are under the control of the flight deck. These are tracking devices, aircraft identifiers, that work in the secondary radar regime. If you turn off that transponder in a secondary radar regime, it causes a disappearance of that particular aeroplane from the radar screen. That should never be allowed to happen. All secondary and primary radar should be the same. Irrespective of when the pilot decides to disable the transponder, the aircraft should be able to be tracked. So the notion by the Malaysians that the disappearance from the secondary radar and then the ability of the military to use primary radar to track the aeroplane and identify it as ‘friendly’ – I don’t know how they did that – is something we need to look at very carefully.

. . . . I’m still struggling to find why a pilot should be able to put the transponder into standby or off. In my view, that should not be an option. Thirdly, the air traffic control systems should not have a situation where a non-transponder aircraft without its squawk identifier should not be allowed to turn off and still not be able to track it. This is absolute stuff of nonsense. Radar is radar, it will pick up metal objects flying at the speed of the size of a 777 without any difficulty. Who took the decision to say: ‘If a transponder is off, we can’t track it in a secondary radar regime’? Which apparently most air traffic control systems are in. We must look at that as well. This aircraft in my opinion was under control, probably until the very end.

But why would they fly down five hours straight towards Antarctica?

If they did! I am saying that every single element of the ‘facts’ of this particular incident must be challenged and examined in full transparency, exhausted to the point that there is no other way that we can think of this other than a complete mystery. We are nowhere near that, there is plenty of information out there, which we need to be far more forthright, transparent and candid about.

There is indeed “far more information out there” and Florence de Changy spills it all out along with clarity about the sources and their reliability or otherwise.

It’s a book well worth reading. Meanwhile, here’s a brief intro. It’s a 25 minute interview on ABC’s Late Night Live with the author. 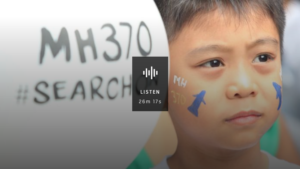 And no, no credence is given to conspiracy theories that have placed the plane in Pakistan, in Somalia, in Kazakhstan, on its way to crash into Diego Garcia. But the origins of those fanciful ideas are included. And if you were assured by the debris washed up on Reunion Island and Madagascar and surrounds you will be surprised to learn how many problems arise with that supposed evidence, how it was found, what it actually is and its condition, and the way the results of studies on it were officially announced. And no, there is no evidence that the captain was suicidal: all the evidence points to anything but.

Just to give you some idea of the scope of the research that has gone into Florence de Changy’s book here is an extract from her acknowledgements: