I trust most readers here would patiently attempt to point out to intellectual snobs who look down with scorn and mockery on those less well educated that their privileged status obligates them to act with responsibility and do what they can to broaden a community’s education.

Wikipedia’s editors are, of course, the general public. The scholar who went on to call them dullards and add labels to his post that included disdain, scorn, stupidity, could have deigned to dirty his hands and correct the article himself. That’s how Wikipedia works. Anyone who sees a mistake can correct it. Some scholars would seem to prefer to sit back and laugh at lesser mortals than actually go to the trouble of sharing their knowledge and better informing them.

I am reminded of a 2005 study. If there is anything comparable that is more recent do let me know. I wrote some time ago the following about it:

Research that was published in Nature in 2005 showed that it is comparable in accuracy and thoroughness with Encyclopedia Britannica. There were round about the same number of mistakes in each. Wikipedia responded by correcting its mistakes. EB, on the other hand, responded with a furious rebuttal and even threatened to sue Nature or the authors of the research. But Nature published a pretty strong rebuttal.

I notice that the wikipedia entry has since corrected the photo in the article that made the scholar feel so so superior to the less well informed.

I do have to confess that this time I have not followed my own advice and attempted to point out to our gentleman scholar that he not only has the freedom and invitation to make a correction himself in the democratic encyclopedia, but some would even think he has a responsibility to do so. Previous attempts to engage the gentleman scholar have unfortunately resulted in him responding with vile insults. But don’t let my negative experiences stop you.  (I have at times gently pointed out to the occasional person who mocks wikipedia out of ignorance that they themselves are free and encouraged to make corrections themselves.)

I should add that Wikipedia is far from perfect. There are indeed a few articles that seem to have been taken over by dedicated persons determined to undo any editing that does not agree with their own biases. I understand that there are ways to respond to those sorts of situations, but then one has to decide on priorities and time against the an every painful awareness of the shortness of life. 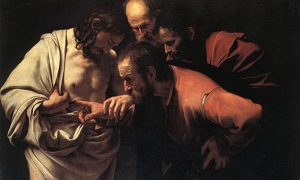 There’s an interesting article discussing the origin of our belief that Tertullian wrote, “I believe because it is absurd”, at aeon.com,

‘I believe because it is absurd’: Christianity’s first meme

The article is another warning not to thoughtlessly take on board popular “knowledge” that “everyone knows to be true”.

I learned of it through another discussion, one on the Westar Institute site, clarifying the diverse meanings of the word “faith” by Bernard Brandon Scott, The Trouble with Faith.