From this point Gullotta loses sight of Carrier’s own line of reasoning, sometimes erroneously conflating MacDonald’s and Carrier’s views, and even at one point distorting the meaning of MacDonald’s words in order to fire a salvo at “mythicists” in general.

As I said, trying to get a complete handle on Gullotta’s fifth point is a long haul. I’ll set out the evidence for the assertions in the previous paragraph in my next post.

So from that point I continue. 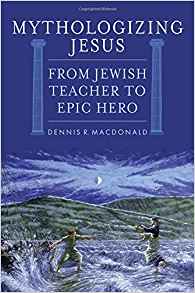 Because almost every event in Mark has some sort of Homeric counterpart according to MacDonald, many mythicists have taken his work to indicate that the Gospels have no historical value whatsoever. This, however, is not the conclusion MacDonald has come to, and because of the popularity of his research among mythicists, he has had to clarify his own confidence in the existence of the historical Jesus.97

97. For example, ‘A Jewish teacher named Jesus actually existed, but within a short period of time, his followers wrote fictions about him, claiming that his father was none other than the god of the Jews, that he possessed incredible powers to heal and raise from the dead, that he was more powerful than ‘bad guys’ like the devil and his demons, and that after he was killed, he ascended, alive, into the sky’, in Dennis R. MacDonald, Mythologizing Jesus: From Jewish Teacher to Epic Hero (Lanham: Rowman & Littlefield Publishers, 2015), pp. 1–2. Also see Dennis R. MacDonald, Two Shipwrecked Gospels: The Logoi of Jesus and Papias’s Exposition of Logia about the Lord (Atlanta: Society of Biblical Literature, 2012), pp. 543–560.

Yes, indeed, Dennis MacDonald has always made it clear that he does not dispute the historicity of Jesus and that he has never intended his research to lead to such a conclusion. But not even the quotation Gullotta finds to repeat this point can support his insinuation that MacDonald’s arguments believing in the historicity of Jesus somehow equates with the gospels containing some kind of “historical value”. Gullotta appears not to notice that the quotation he supplies to supposedly rebut the idea that the gospels have no historical value itself says that the gospels are indeed fictions! One does not need to believe in the historical value of the gospels to believe in a historical Jesus as a good number of scholars can testify. (Again, where were the peer reviewers part of whose job, I thought, is to prevent such non sequiturs going to into print?)

Almost amusing is Daniel Gullotta’s attempt to use Margaret Mitchell’s 2003 critical review of Dennis MacDonald’s Homeric thesis in support of his contention that Carrier has as much egg on his face as MacDonald for (supposedly uncritically) jumping on MacDonald’s bandwagon. But if Gullotta has paid closer attention to both what Mitchell faulted in MacDonald to what Carrier himself concluded about MacDonald’s views, he would have seen they were not very far removed from one another! END_OF_DOCUMENT_TOKEN_TO_BE_REPLACED