I am posting here an off-the-cuff comment that I hope to develop more completely (and with citations by historians) in future posts.

I love Matthew Ferguson’s posts on Κέλσος. Many of his interests overlap with mine, especially his studies on ancient literature as a comparative backdrop to the study of the gospels. His two recent posts are

In the first of those posts Matthew rightly points out that historical accuracy of itself can hardly be a criterion by which to judge a literary genre. There are badly written “histories” that get a lot of things wrong either through incompetence or ideological motivation; there are historical novels that can accurately inform anyone seriously interested in “how the past was”.

But when Matthew, in step with New Testament scholar Christine Thomas, appears to suggest that a historian’s focus must be on a point of reference that is outside the text itself, to events “out there” that the text references, I find myself running into difficulties. Such a claim, seemingly obvious enough on the surface, raises a host of questions in my mind.

Where to begin? Firstly, yes, it is certainly true that such a view of how historical research is done does indeed apply to the way many biblical scholars seem to study the canonical gospels and Acts. It certainly applies to the way many “Old Testament” scholars have traditionally approached the “history of biblical Israel”. And there lies the first difficulty or question that pulls me back from fully accepting Matthew’s and Christine’s apparent claims (assuming I have understood them correctly). Much of what scholars have done in attempting to write a history of “biblical Israel” has in recent decades been sharply challenged by a a number of scholars that have come to be known, cynically by many, as “minimalists”. The approach of “minimalists” has been to do history by being careful not to go beyond or behind the textual sources, not to try to divine the identities, contexts and intentions of authors through assumptions leaping off and away from the texts themselves, but to bring historical reconstruction into line that hews to the textual evidence itself. One such “minimalist”, Philip R. Davies, did express the hope that one day the same method might be applied to the study of Christian origins, even the “historical Jesus”.

The past is dead and gone. What happened in the past does not exist out there like a disembodied horde of persons acting out what they did in the past like ghosts. We cannot study the ancient texts in the hopes that they can serve as windows to “real events” just as they were but that are no longer present, no longer there to be seen.

The ancient texts are not windows through which we can see what no longer exists. It is a romantic dream to think that we can somehow find magic formula that will open up to us visions or even just glimpses of “how it was” or “what happened”.

No, the historian’s task has moved on from such romantic assumptions, at least in large swathes of the areas of historical research outside the realm of theology and biblical studies. The historian’s task is far closer to interpreting the texts in their own right, for their own sake, and not so much to try to recreate something external to them, than I think many biblical historians have as yet come to accept.

I recently posted a point by the philosopher of history, Aviezer Tucker, in which he pointed out that the historian does not (or at least should not) ask, “Did this recorded miracle really happen?” No, the correct historical research question to ask is, “What is the best explanation for this source that speaks of a miracle?”

The difference may seem merely semantic on the surface but it is in fact profound. We also saw how deceptively even a knowledgeable historian can be beguiled into eliding the difference and how even Tucker himself contradicted his own principles by asking “Did X happen as stated in the gospels?”

The correct approach of the historian is to ask “How do we explain these documents, these texts, these writings, and the contents of their narratives?”

To answer such a question requires reference to other texts, sometimes texts in stone, or artefacts. But it is a mistake to attempt to answer it by reference to some ghost of a past that is no longer there as if a name or event in the texts is a cipher or magic code that potentially points to that ever-present ghost always acting out the past, “out there, back then”.

When we stop to think about it carefully we will come to see Philip Davies’ point that such a view of history, assuming that narratives somehow must be magic mirrors dimly reflecting a past reality, is in fact an entirely circular exercise.

Yes, that does mean that much that has been written till now becomes obsolete, the product of a romantic era that itself becomes a topic of historical interest. It has happened in the field of ancient history; it has happened in the study of “biblical Israel”; it may be a lot longer, I fear, before it will happen in the area of the New Testament and Christian origins. 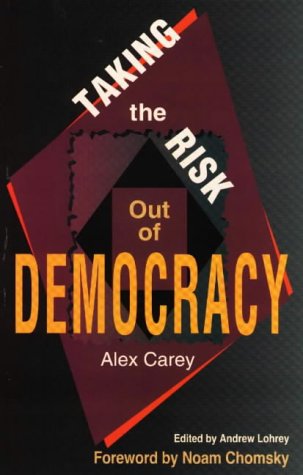 What if the following had been part of the core curriculum for every junior high school or equivalent in western industrial democracies:

The twentieth century has been characterized by three developments of great political importance:

There have been two principal aspects to the growth of democracy in this century:

These developments have presented corporations with potential threats to their power from the people at large (i.e. from public opinion) and from organized labour. American corporations have met this threat by learning to use propaganda, both inside and outside the corporation, as an effective weapon for managing governments and public opinion. They have thereby been able to subordinate the expression of democratic aspirations and the interests of larger public purposes to their own narrow corporate purposes.

Corporate propaganda directed outwards, that is, to the public at large, has two main objectives:

Corporate propaganda directed inwards, that is, to employees of the corporation itself, has the purpose of weakening the links between union members and their unions. Techniques employed in the United States for this purpose come under the broad disguise of ‘human relations’, ’employee participation’ and ‘employee communications’.

From the beginning of the century large-scale, professionally organized propaganda campaigns have been a key feature of the political activities of American business.

Carey, Alex. 1997. Taking the Risk out of Democracy : Corporate Propaganda versus Freedom and Liberty. p. 18 (my formatting)