Back in June I noticed the following blog post by a certain professor of New Testament studies and “progressive Christian” but being overseas and away from my little library I was unable to check the details and respond at the time…..

The French scholar Charles Guignebert, Professor of Christian History at the Sorbonne in Paris, wrote a very critical book on Jesus in the 1950s. He was far more skeptical of the value of historical data on Jesus than most New Testament scholars liberal or conservative would be today. . . .

(James McGrath knowing how much you love the mythicists, I thought you might appreciate this quotation)

. . . .[A]s skeptical as Guignebert was of the New Testament evidence, he was even more skeptical of the fanciful reconstructions of the Mythicists (historical Jesus deniers). I don’t think I’ve ever run across a better summing up of why scholars as a whole tend to reject the theories of the Mythicists . . . .

James McGrath loved the quote and even placed it against another quote by Christ Myth scholar Robert M. Price to make it appear that Price was ignorantly claiming some small support from Guignebert without any justification.

Well, I’ve returned home now and had a chance to check my Guignebert and was both surprised and not surprised to find that the Huggins-McGrath quotation just happened to stop short of a sentence that backfired on what they were claiming the quote said about “mythicism”. Here are the words of Guignebert selected by Huggins and McGrath to make their case:

“It is evident that if the personality and influence of Jesus disappeared from history, the birth of Christianity has still to be explained, and it is to this task that those who deny his historicity have applied themselves, with a confidence only equaled by the variety of their theories and the flimsiness of their arguments. Popular opinion, always susceptible to novelty, and entirely indifferent to the cautious reservations of scientific exegesis, impressed by their air of conclusiveness [64] and originality, has more than once given an enthusiastic reception to such theories, and encourage the amateurs by its admiring applause. For “amateurs” they nearly all are who uphold the negative and mythological point of view; some naïve and superficial, quite unconscious of the pitiful inadequacy of their knowledge, others well documented, that is to say, conversant with the subject, sometimes even learned in it, but equally ignorant or impatient of the humble and patient discipline of exegesis. They are ever ready to thrust aside or mishandle the texts instead of cautiously and respectfully attempting to extract truth from them; to impose upon them whatever conclusions their own convictions demand, instead of keeping within the limits to which a scrupulously critical and historical sense would confine them. Such flimsy and unfounded speculations may perhaps yield interesting works of the imagination, and exhibit a fascinating ingenuity, but they do no service to science.”

That quote finishes mid-sentence. “Science” is not the last word of the sentence. It appears, furthermore, that both Huggins and McGrath were interrupted before they could read the very next sentence which I quote here:

We are not here referring to the position that Jesus had no historical existence, which is in itself a perfectly legitimate theory entitled to serious discussion.

So when the “Religion Prof” (as the author calls himself) set up the Guignebert quotation against Robert M. Price as he did….

Compare that quote with how Robert Price apparently spoke of Guignebert’s perspective:

The Religion Prof asks his readers to compare the selected words of Guignebert with those of Robert M. Price, and they do make Price look a bit foolish, dishonest even.

But Guignebert’s very next sentence after the words selected for quotation actually belie the claim by both Huggins and McGrath and substantiate the quote by Price. Price said Guignebert took the hypothesis seriously and we see that Guignebert indeed used the words “entitled to serious discussion”.

Guignebert was critical of what since Sandmel is labelled uncontrolled “parallelomania”, a fault that too often accompanied the “history of religions” school at that time and that some mythicists fall into today.

I know you are getting all of this second hand and you can’t check for yourselves what Guignebert wrote, so I have scanned the relevant pages and attach them below. (Excuse the wobbly underlining — thanks to that underlining I was able to purchase my copy at little expense.) 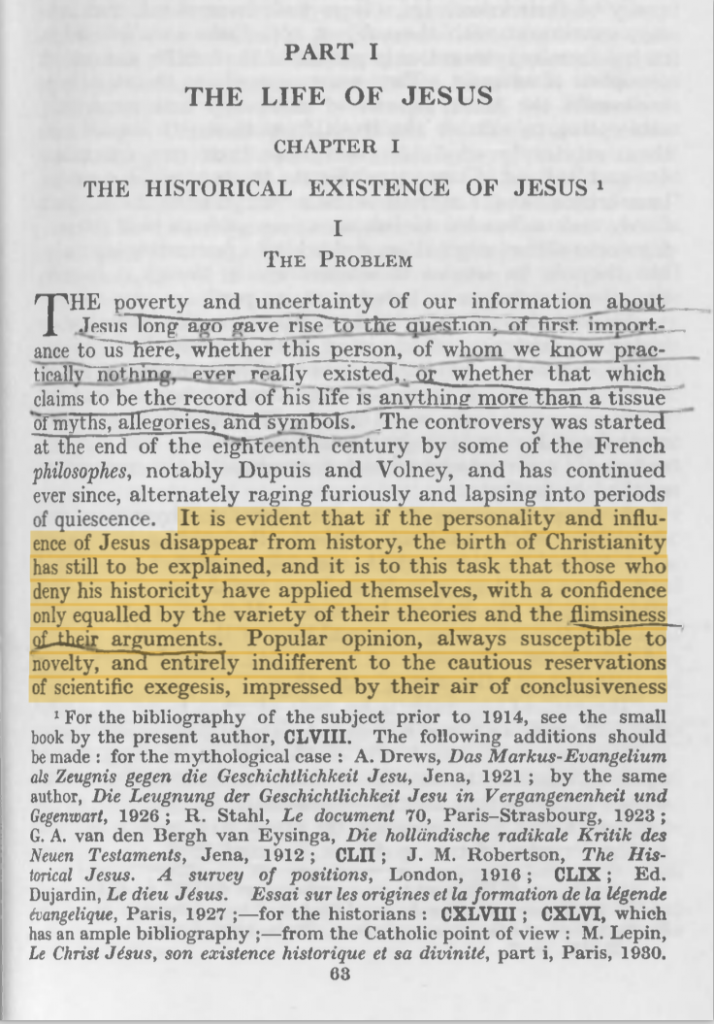 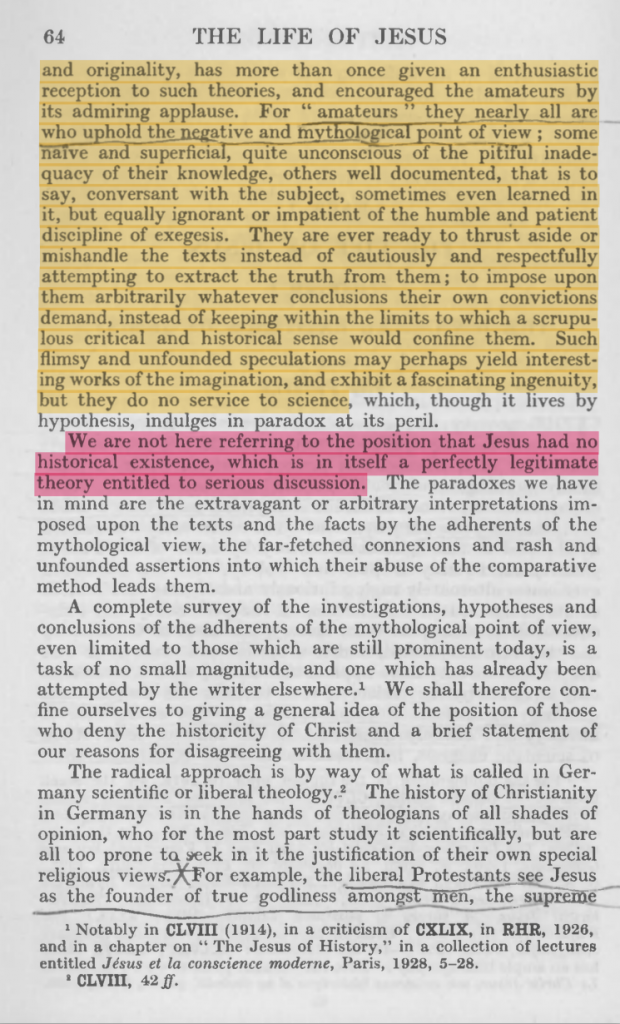 21 thoughts on “Skeptical of Mythicism, Fine; But Scholarly Carelessness, Not So Fine”