For this post I am returning to Gregory Doudna’s 2014 conference paper, Dating the Scroll Deposits of the Qumran Caves: A Question of Evidence.

In this post I want to attempt to set out Doudna’s explanation of how dating the scrolls went (in his view) so wrong.

1947 – Discovery and the first dating

When the scrolls were first discovered they were dated by Solomon Birnbaum and William F. Albright to the mid first century BCE.

This period was based on palaeographic analysis of the script.

Cave 1 was excavated in 1949 and Albright dated jars and lamps associated with the scrolls before the second half of the reign of Herod when “Romanization” influences began to dominate. Since Herod ruled 37 to 4 BC that places the pottery before ca 20 BCE.

Dating this time was based upon ceramic typology. Items assessed were “scroll jars” and two “hellenistic” lamps.

There was a small quantity of later Roman domestic pottery and lamps but this was regarded by all as “intrusive and later, not associated with the scrolls and scroll jars.”

The Qumran “settlement” is a little over 1 km south of Cave 1.

The term “settlement” is misleading since it implies a permanent domestic habitation. As we have seen in the previous two posts there are very good reasons for understanding occupation of Qumran was seasonal and that it was generally deserted every summer.

But the significant point for this post is that with the excavation of 1951 the dating of the scrolls changed dramatically.

A jar identical to the one found in Cave 1 was found embedded in the floor of “Locus 2” of Qumran. Locus 2? For those who are as finicky as I am and want a clear grasp of the details here is a map I located from somewhere(?): I have highlighted what looks to me like Locus 2 — 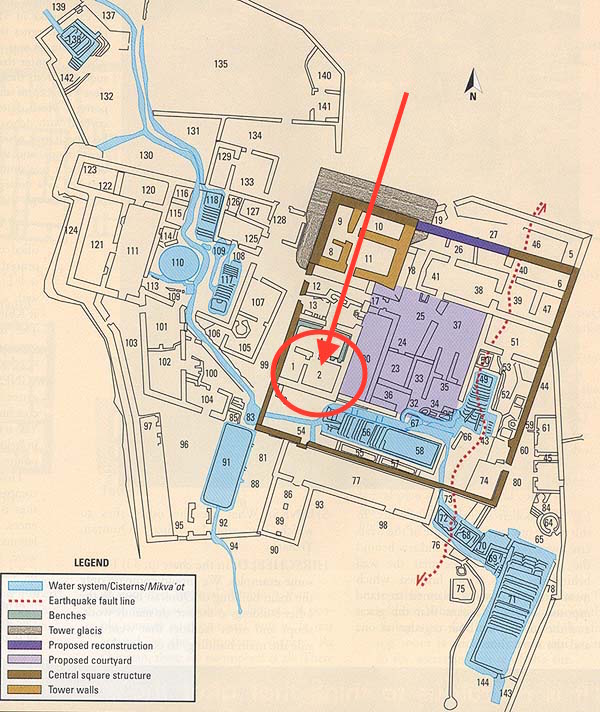 Coins dated to the first century CE up to time of the Jewish revolt 66-70 CE were also found in Locus 2 and nearby loci.

It followed (so it seemed) that the scroll jars and scroll deposits of Cave 1Q were first century CE. (Doudna, p. 240)

For someone like me who is very new to this discussion I find it helpful to set it out graphically: 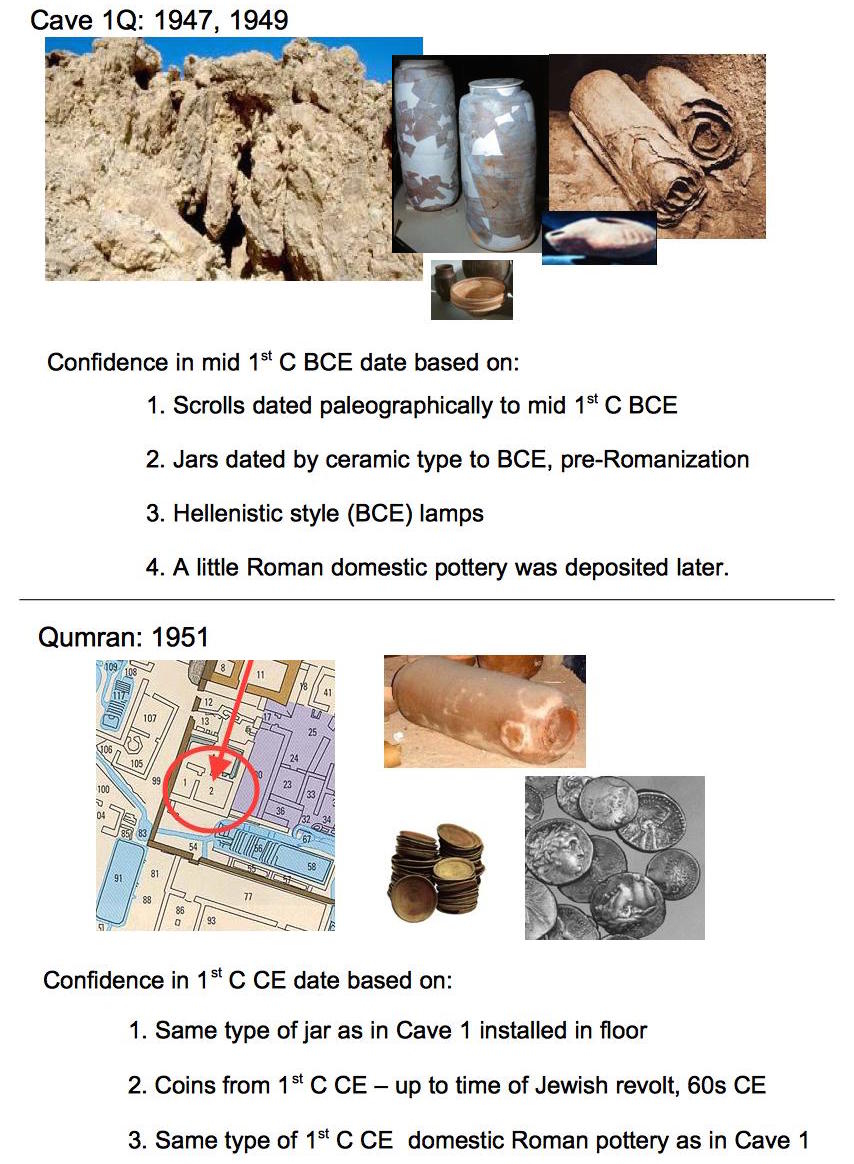 The conclusions drawn from the Qumran 1951 excavation trumped the previous BCE conclusions. The palaeographic datings had been assessed to be BCE but the archaeological evidence appeared to put those behind the eight ball.

Excavation of the settlement at Khirbet Qumran has established beyond doubt that all of the material was deposited in these caves in the late first century AD. (Harding, G.L. 1955. “Introductory, the Discovery, the Excavation, Minor Finds,” in Qumran Cave 1 (DJD 1; ed. D. Barthélemy and J. T. Milik; Oxford: Clarendon Press, 4)

Albright and others fell in line with the new chronology.

Recalibrating the palaeography to fit

So what of the contradictory (earlier) dates based on palaeography?

The typologically most developed formal hands among the Qumran texts were redefined with later dates than previously published, ending at the time of the First Revolt. (Doudna, p. 240)

Frank Moore Cross, Jr. revised the stages of progression of the types of scripts, assigning to each typology its own date range, so that the scrolls from Cave 1 ended at the time of the Jewish Revolt in the mid/late 60s CE.

Other types of script had since been discovered further south at Wadi Murabba’at. These new scripts were far advanced over the Qumran texts and bore similarities with the much later Masoretic Text. Since the Qumran text was now said to fill out the first century CE up to the time of the Jewish War, the Murabba’at texts were consequently dated after the destruction of Jerusalem in 70 CE.

This culminated in Cross’s well known study of 1961 which has been the standard used for palaeographic dating ever since.11 On this basis all of the non-Qumran biblical scrolls then known (from Wadi Murabbaʿat and Naḥal Ḥever) were dated post-70 CE and their scribal hands named “post-Herodian formal,” in Cross’s 1961 reconstruction.12

So the palaeographic typology that in the 1940s assigned the cave texts to BCE was after 1951 and the excavation of Qumran shifted to CE and up to the Jewish War.

To repeat and to be clear: the focus on the First Revolt as the date of the latest Qumran texts began as an archaeological correction in the dating of the scroll jars and scroll deposits in the caves. Then the palaeographic datings were secondarily adjusted to be in alignment. That was the specific direction of the logic. The archaeological correction of the scroll deposits to the First Revolt was the basis for fixing the palaeographic dates of the latest Qumran cave texts to the first century CE, and the dates of the biblical texts postdating the Qumran caves’ latest to later than 70 CE. (p. 240)

Sounds simple enough? But not so fast.

That resetting of the palaeographic dates to conform with artefacts in Qumran was based on three assumptions, all of which were “deeply flawed.”