Previous two posts: (1) Propaganda in Modern Democracies and (2) “America, the most propagandised of all nations”

It began with the emergence of modern democracy. Historians have labeled the few decades prior to World War 1 the Age of Progress (compare the Gilded Age in the US). Business interests boomed and so did working class power. Democracy was on the march in both the UK and US: in 1880 10 to 15% of the population had the vote; by 1920 that figure had advanced to 40 or 50% — although in reality it was more a slogging series of trench battles than a march.

It is hard for us today to imagine that two hundred years ago people were arguing that land itself was by nature “the free gift of the Creator to all his creatures, and not the produce of human labour, like money, food, or any other perishable commodity, it can never be a legitimate subject of property.” (Bronterre, The Operative, vol. i., no. 4, p. 1, 1838, cited in Dickinson 1898, p. 145) Bronterre was not alone. Robert Owen was among other prominent voices for the same principle.

Those who owned the property and capital were by and large alarmed by these developments.

[T]o the working class the question of political reform had been from the beginning a question of property. It was misery that made them politicians. They were convinced that all their suffering was due to unjust laws, and that, therefore, the only remedy was the appropriation of political power by the sufferers. Society, as it was constituted, was an organised conspiracy to rob the working class; it was the order of society itself that needed to be reversed, and the means to that reversal was parliamentary reform. . . .

It appears, then, . . .  that the political agitation of the working class was inspired from the first by the keen sense of distress . . .

[A] silent revolution has taken place. By successive extensions of the franchise and redistribution of seats the principle of adult (or at least of manhood) suffrage has come to be so far recognised in fact that a further extension of it is generally felt to be merely the logical corollary of what has been already done. . . .

But the mass of the people into whose hands, in the course of devolution, the government will fall, are daily becoming more and more aware of what they mean to do with their power. The working class is ranging itself against the owners of land and capital. The nation is dividing into two antagonistic sections, and it is to one of these sections, that which is numerically the larger, that must fall, according to the democratic theory of government, the absolute monopoly of power. It is in this situation that resides the political problem of the English democracy . . . . (Dickinson 1898, p. 131, 146, 153, 159)

How serious a problem was the extension of democracy?

Universal suffrage . . . would give, it is supposed, to the more numerous of the two classes . . . the unconditional and absolute control of the legislature; they would therefore be able to effect, without further difficulty or scruple, a fundamental change in the tenure of property.

Stated thus crudely and frankly, but not, as I believe, unfairly, this conception appears to me to be a reductio ad absurdum of the whole theory of democracy, so far as it is held in any absolute sense. It is not true, and it never has been and never will be true, that the majority have either the right or the power to do anything they choose, in defiance of the claims or the wishes of the minority; and if ever a serious attempt were to be made to carry out the policy of the Socialists, the only result would be the breakdown of government altogether. Government by the majority is a convenient means of conducting national affairs, where and in so far as there is a basis of general agreement deeper and more persistent than the variations of surface opinion; but as soon as a really fundamental point is touched, as soon as a primary instinct, whether of self-preservation or of justice, begins to be seriously and continuously outraged, the democratic convention gives way.

Fear of “the tyranny of the majority” does sound somewhat crass if those who have the most to lose for the sake of establishing a more equitable and fairer society for all speak about their own interests only. Attention is deflected to a more idealistic cause, one that makes the opponents of majority rule look like white knights  with nought but the interests of others at heart, like religious minorities. (Never mind the fact those opposed to full democracy at other times expressed horror that the advocates for extending the franchise would “destroy all reverence for religion” and roll back the power of the Church!)

No minority, for example, even in a compact modem State, either would or ought to submit to a decision of the majority to prohibit the exercise of their religion. Such a decision could only be carried into effect by force, subject to the contingency of armed rebellion; and orderly government would dissolve into veiled or open civil war. Similarly, and in spite of the optimism of Home Rulers, it is perfectly possible that in the case of a population as heterogeneous as that of Ireland, the attempt to introduce the system of government by the majority might really drive the minority to rebellion. (Dickinson 1898, p. 161f)

END_OF_DOCUMENT_TOKEN_TO_BE_REPLACED

Or you can read a short version on the news site where I first learned about it:

Or under a title I thought most apt:

A nose by any other name would sound the same, study finds

Here’s a list of the sounds taken from the original PNAS article (symbols are described here): 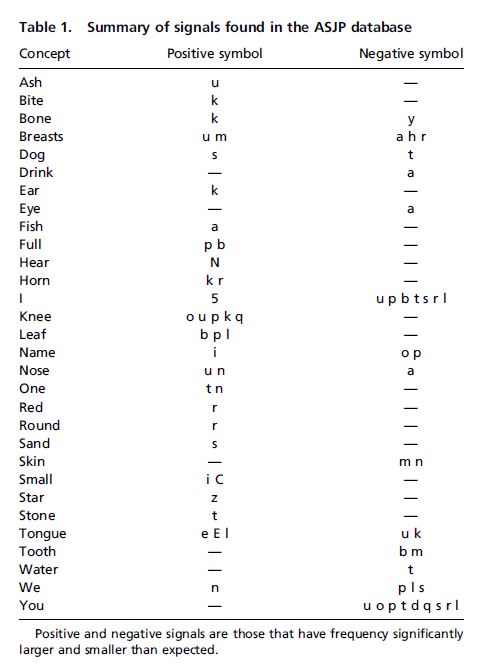 Nor can I resist the nice map from the same article: 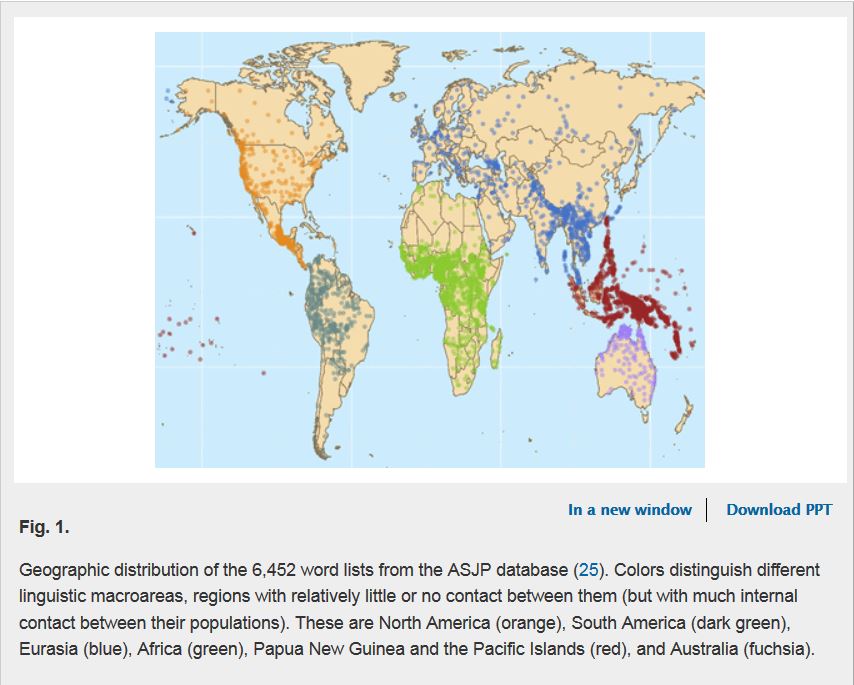 Trying to think through the significance(s) should it be confirmed. . . . .