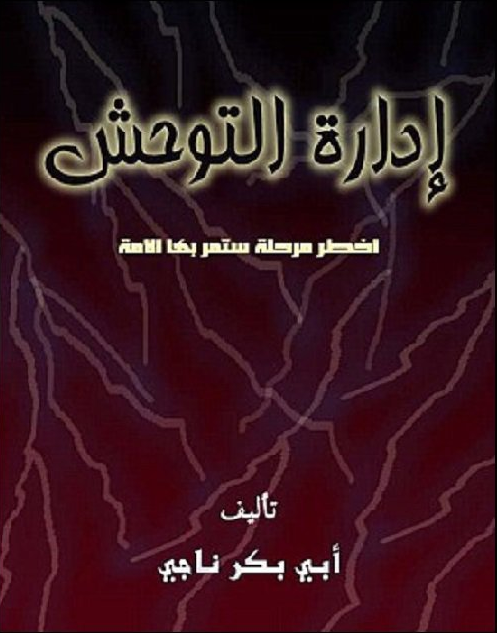 Several times I have urged anyone interested in understanding modern Islamist terrorism to read the manuals and other literature that the Islamist terrorist groups like Al Qaeda and Islamic State have taken as their guides. Recently I went one step further and posted an overview of the seminal Islamist writing by Sayyid Qutb: The Founder of Islamist Extremism and Terrorism.

Another major work whose influence is very clear throughout Islamist writings and public announcements is The Management of Savagery, published online in 2004 under the pseudonym Abu Bakr Naji.

There is no need to wonder why Islamist terrorists target civilians in the West for horrific deaths. Naji set out the tactic and its rationale for all to read. There is no secret. No mystery.

I will copy and paste a few relevant sections from this manual. The translation is by (oh no, here’s that name again William McCants. The copy I am using requires me to acknowledge the following:

Funding for this translation was provided by the John M. Olin Institute for Strategic Studies at Harvard University, and any use of this material must include a reference to the Institute.

The management of savagery is the next stage that the Umma will pass through and it is considered the most critical stage. If we succeed in the management of this savagery, that stage (by the permission of God) will be a bridge to the Islamic state which has been awaited since the fall of the caliphate. If we fail – we seek refuge with God from that – it does not mean end of the matter; rather, this failure will lead to an increase in savagery!!

I skip the sections where Naji pinpoints times and places of supposedly comparable operations of savagery in history (e.g. resistance by numerous small bands to the Crusades).

A – The first goal: Destroy a large part of the respect for America and spread confidence in the souls of Muslims by means of:

(1) Reveal the deceptive media to be a power without force.

(2) Force America to abandon its war against Islam by proxy and force it to attack directly so that the noble ones among the masses and a few of the noble ones among the armies of apostasy will see that their fear of deposing the regimes because America is their protector is misplaced and that when they depose the regimes, they are capable of opposing America if it interferes.

B – The second goal: Replace the human casualties sustained by the renewal movement during the past thirty years by means of the human aid that will probably come for two reasons:

(1) Being dazzled by the operations which will be undertaken in opposition to America.

(2) Anger over the obvious, direct American interference in the Islamic world, such that that anger compounds the previous anger against America’s support for the Zionist entity. It also transforms the suppressed anger toward the regimes of apostasy and tyranny into a positive anger.

(C) – The third goal: Work to expose the weakness of America’s centralized power by pushing it to abandon the media psychological war and the war by proxy until it fights directly.

There is discussion of the appropriate targets of terrorist attacks. The aim is to spread the defensive forces of the State powers so thin as to be effectively useless as a guarantor of safety.

Hitting economic targets will force (the enemy) to goad the regimes, who are (already) exhausted from protecting the other remaining targets (economic or otherwise), into pumping in more forces for its protection. As a result, feebleness will start to appear in their forces, especially since their forces are limited . . . .

Thus, their forces are limited and select and the regimes have to put in place the following priorities:

There is an important principle which states, “If regular armies concentrate in one place they lose control. Conversely, if they spread out, they lose effectiveness”. . . .

When the best forces are positioned to protect thousands of petroleum or economic locations in a single country, the peripheries (of that country) and the crowded regions will be devoid of forces.

Organization is taken seriously. They are not amateurish hobbyists:

The most important skill of the art of administration that we must use is learning how to establish committees and specializations and dividing labor. . . .

We must make use of books on the subject of administration, especially the management studies and theories which have been recently published . . . .

And not only books on administration . . . .

— General books on the art of war, especially guerrilla wars . . .

Following the time-tested principles of military combat will shorten for us the long years in which we might suffer the corrupting influences of rigidity and random behavior. Truly, abandoning random behavior and adopting intellectual, academic methods and experimental military principles and actually implementing them and applying military science will facilitate our achievement of the goals . . .

Page 31 brings us to our main interest:

Those who study theoretical jihad, meaning they study only jihad as it is written on paper, will never grasp this point well. Regrettably, the youth in our Umma, since the time when they were stripped of weapons, no longer understand the nature of wars. One who previously engaged in jihad knows that it is naught but violence, crudeness, terrorism, frightening (others), and massacring—I am talking about jihad and fighting, not about Islam and one should not confuse them.

“Not about Islam”? “One should not confuse them”? That should not be surprising after reading Qutb’s Milestones. Qutb set out in black and white clarity the difference between Islamism and mainstream Muslims.

But never mind for now, let’s pick ourselves up and move along as if we never read that bit. . . .

We are now in circumstances resembling the circumstances after the death of the Messenger (peace and blessings be upon him) and the outbreak of apostasy or the like of that which the believers faced in the beginning of the jihad. Thus, we need to massacre (others) . . .

A large section of Management is devoted to media management. Example scenarios (e.g. hostage taking) are presented and appropriate ways to communicate with the media/public before, during and after such an operation.

Therefore, the first step in putting our plan in place should be to focus on justifying the action rationally and through the sharia and (to argue that) there is a benefit in this world and the next (for undertaking the plan).

That justification, as implied in the above words, means stressing the idealistic motives, the conformity to “true Islam” (contrary to mainstream “apostates”) — the appeal to win more idealistic jihadis.

Why Attack the Innocent?