Let’s try to understand what religious beliefs are. What makes a religious belief work, take hold, and are found across cultures and generations? In these posts I’m continuing to focus on Religion Explained: The Evolutionary Origins of Religious Thought by Pascal Boyer whose explanation is grounded in cognitive theory. That is, this is a cognitive explanation for religion.

Religious beliefs — gods, ghosts, virgin births, etc — are not randomly fabricated nonsense. (I included ghosts as an example of religious beliefs because I’m discussing religion in its most generic sense and not confining myself to mainstream Western religions.) Religious concepts actually follow certain rules or recipes. They have specific types of properties. The Flying Spaghetti Monster, on the contrary, is a concoction made to look like “randomly fabricated nonsense”; the ingredients that go into the making of real religious concepts could scarcely produce a Flying Spaghetti Monster.

I cannot possibly explain in depth how this recipe works in a blog post. To get the details one ought to read the first two chapters of Boyer’s book. I will try to hit key highlights. (And of course the terms used in describing cognitive processes are necessarily metaphorical.)

There are two essential ingredients that go into making a viable religious concept, and they need to be mixed in the right proportions. Boyer discusses the experimental research behind it all but I won’t address any of that here.

Take the overall understanding of what we all have by the idea of “animal”. We have all constructed since infancy an common set of ideas of what being an “animal” means, such as:

In fact we have “minitheories” about what it means to be an animal. As soon as we understand something is an animal we immediately infer many things about it that we do not need to check or test each time: e.g. it consists of the same sorts of innards, digestive tract, nervous system, as any other animal; that it will have a symmetrical shape; that it eats to survive — either plants or other animals; that if it kills and eats other animals it does so because it gets hungry, and so forth.

If you never heard of an Invisible Rail but were told it was an animal creature of some sort, then you would instantly know all of the above about it before even knowing what sort of animal it was or what it looked like.

An animal category in our heads enables us to make sense of “natural concepts” and to make all sorts of inferences about their behaviour without ever being told such details again each time we learn about a new animal.

In other words, we have a whole range of expectations that come into play whenever we are told about a new animal. If you heard that an Invisible Rail laid eggs from which baby Invisible Rails hatched you would not be surprised. If in addition you learned that it had wings, you would know it is a bird, and you would assume it has a beak and feathers. All of this would be consistent with the sorts of details you would have expected to hear about a something belonging to the animal category of knowledge.

But if you hear that an Invisible Rail had the ability to suddenly materialize anywhere and anytime when a child was deeply distressed, that would be unexpected information. That ability would violate all that you know about the properties of physical bodies. It would not be something your understanding of animals allowed to happen.

But at the same time everything else about the Invisible Rail — laying eggs, feathers, wings, beak — would be exactly as you expect.

A religious concept consists of these two things:

There are a few more rules surrounding these two details, but first let’s understand “ontological categories”.

Animal is an ontological category; another is Person; so is Plant; and Tool; and Natural Object.

More than mere umbrella terms, ontological categories are rich in default inferences about any concrete object that comes within its field. So we do not need to be told for each new animal that we learn about that it needs to sleep, eat, breathe,in some manner, that it breeds its own species, that it moves about in search of food, safety, mates, and so forth.

A religious concept works with these ontological categories, it takes on board all of their rightful inferences, but it also throws a spanner into the otherwise beautifully working system. But as a rule just one spanner. Not lots. Otherwise we’d get such nonsense as flying spaghetti monsters. More than one spanner and we can say in general that the whole thing falls apart and people lose interest. Predictability, natural and rightful inferences must be preserved, too; only one exception is normally allowed just to make it interesting rather than hopelessly chaotic.

Another ontological category is Person.

Religious or spiritual concepts built around a person illustrate this:

Another ontological category is Plant:

So a wooden statue that hears prayers is a Tool category (with all that we infer from that — it is inanimate, can’t move by itself, etc) but with the exception that it has special cognitive functions: it can hear and understand prayers. It borrows a feature normally unique to the Person category.

As Boyer puts it, religious concepts comprise (a) an ontological label and (b) a particular tag. The tag contradicts some information given by the label. 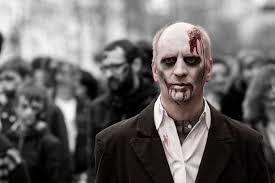 Thus to expand upon the zombie concept above. Zombies

are certainly counterintuitive in that they are PERSONS but without control of their own actions. (Comatose or paralyzed people are a different case because they do not engage in complex series of actions. Zombies go around, carry things, even murder people.) But this counterintuitive element still leaves many aspects of the PERSON category untouched. This is good [for a durable religious concept], because there is a lot in the person category that tells you what to expect a zombie to be like. Persons are solid physical objects with a mass. Zombies are like that too. Persons have a unique location in space and time. Zombies too are at one place at a time. To turn to more gruesome conjectures, if you chop off a zombie’s arm, the zombie may carry on living but not the arm! At least you are not given any information to the contrary, so that is a plausible conjecture. (p. 73) 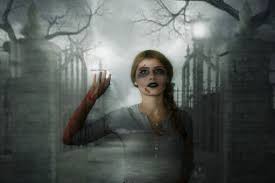 Or to take the ghost example:

A good illustration is the familiar concept of ghost or spirit. This is found more or less the world over, not just in Gothic novels and Victorian seances. The concept is that of a PERSON who has counterintuitive physical properties. Unlike other persons, ghosts can go through solid objects like walls. But notice that apart from this ability, ghosts follow very strictly the ordinary intuitive concept of PERSON. Imagine a ghost suddenly materializes in your home as you are having dinner. Startled by this sudden appearance, you drop your spoon in your plate of soup. In a situation like that, your mind creates a whole lot of assumptions of which you are not necessarily conscious. For instance, you assume that the ghost saw you were having dinner, so she now knows that you were eating. Also, the ghost probably heard the sound of your spoon landing in the soup and can now remember that you dropped it. You assume that the ghost knows you are here, since she can see you. It would be unsettling but not too surprising if the ghost asked you whether you were enjoying your dinner. It would be very weird if she asked you why you never had dinner at home or why you never had soup. In other words, you assume that this ghost has a mind. All of the italicized verbs above describe the sort of thing a mind does: it perceives actual events in the world and forms beliefs on the basis of those perceptions. Furthermore, the ghost’s mind seems to work according to definite principles. For instance, we assume that the ghost sees what happens and believes what she sees. We do not assume that the ghost sees what she believes.

All this may seem rather banal . . . and as the old Groucho Marx joke goes, don’t be deceived: it is banal. Our notions about the ghost’s mind are just similar to our assumptions about the minds we are used to, that is, our own minds and the minds of people around us. Most of our interaction with ghosts is informed by assumptions that we routinely use in dealing with more standard versions of persons. Indeed, the banality of ghost-representations is a rich source of comic effects, as in the Woody Allen story where the hero returns from the dead to visit his widow during a seance only to ask her how long it takes to roast a chicken in the oven. The world over, people assume that such agents as ghosts and spirits have minds. (pp. 73-74)

We can begin to see why cultural transmission is very easy for certain types of spirit/religious concepts.

We can also begin to see why there is not an infinite variety of religious concepts around the world. Someone has to go to a lot of work to concoct the Flying Spaghetti Monster because it is so unlike anything in the list of beliefs actually held.

Just imagining strange ideas or qualities is not enough. An example Boyer uses is of a god who is omnipotent but only exists on Wednesdays. This doesn’t work because it violates everything about a Person category.

Lectures and concerts and farmers’ markets may well happen only on Wednesdays. But gods and people are continuous. They cannot exist at some point and again some time later and not exist in the meantime.

Religious ideas are not simply a matter of imagining something odd and associating with some sort of holiness or sacredness. It took me a while to learn that fact when I visited an Indonesian island where the Hindu culture is blended with animist traditions. Locals thought nothing of leaving a broom and dustpan beside a statue of a demon or god of some sort, and normally I could stand beside it, touch it, etc. But during a special religious ceremony when I stood too close to this same statue I was quickly shooed away by offended locals.

Boyer compares understanding religious concepts with understanding the many foods in different cultures. We can draw up a list of all the meals that people eat, and try to classify their tastes, and we would end up with more items than we could meaningfully handle in any quest to find common elements. But when we understand that food consists of a limited number of ingredients and that there are far fewer ways of preparing food, then we

would soon be able to report that the apparently unlimited variety of human cuisine is explained by combinations of a limited set of techniques and a limited set of materials. This is precisely what we can do with religious concepts, moving from the table to the kitchen and observing how the concepts are concocted in human minds. (p. 57, my emphasis)

Okay, that’s just one small part of an answer to the really big question of “What is religion and where does it come from?”

One thought on “Religion Explained: How to Make a Good Religious Concept”