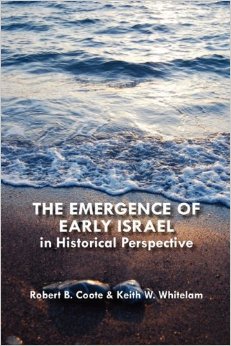 Twenty to thirty years ago a few scholars opened up the first challenges to the dominance of “Biblical history” in Biblical studies. Here is how one of those scholars, Keith Whitelam, looking back described what happened in the wake of the publication in 1987 of The Emergence of Early Israel in Historical Perspective by Robert Coote and himself:

Little did we realize at the time of writing of our own work that we stood on the edge of a fight for history in biblical studies. In

arguing for the priority of archaeological data over the biblical text,

raising questions about the location of the historian or the politics of history,

arguing that the material culture of the highland villages was indigenous,

and advocating a regional history of Palestine,

we were unaware that these would become some of the most contested issues to engulf the discipline for a quarter of a century or more. (p. viii of the Preface to the 2010 edition of The Emergence of Early Israel — formatting in all quotations mine)

Not that all of those questions exploded on the scene the moment the book was released. (I understand it was the 1992 publication of In Search of Ancient Israel by Philip R. Davies that prised open the debate more widely. See vridar.info for some of the details.) The primary theme of the Coote’s and Whitelam’s book was to examine the rise of Israel in a much wider historical perspective and Whitelam points out that the first readers appeared most interested in the arguments for the third point listed above: that the highland villagers from which the political “state” of Israel emerged were in fact indigenous to Palestine and not a recently arrived “foreign” people at all.

Emergence of Early Israel argues that historians need to take stock of what archaeologists have uncovered in its own right and make sense of it on its own terms without selectively interpreting data to fit the Bible’s narrative. This more comprehensive approach leads the researcher to identify continuities in Palestinian history and not, as per the Bible, to a time when one population was subjugated by an outsider people who brought with them the worship of a new deity according to Emergence.

What the evidence reveals are shifting patterns of populations and settlements from the Bronze Age (prior to the time of the biblical Kingdom of Israel) right through to the present day.

Whitelam further argues in his Preface that it was not only an interest in the Bible that distorted the selections and interpretations of archaeological remains but also our modern perception of ethnic and national identity. National identities and histories are so ingrained in us that it is difficult to think of alternative ways of understanding other peoples very distant from our time and culture. It comes naturally to us to interpret even ancient history in national and ethnic terms.

Scholars and archaeologists interested in the Bible and Israel’s history interpreted discoveries of villages emerging in the central hill region around 1000 BCE (the early Iron Age) through what they were most interested in: the later history of the kingdom of biblical Israel and the eventual kingdom of Judah. So these hill people were assigned an interesting label as a means of identification: “proto-Israelites”. The future, and especially modern beliefs, myths and identities, were the means of interpreting the past and identifying the inhabitants.

Whitelam and Coote, on the other hand, viewed that same highland culture in the context of the archaeological evidence for preceding, contemporary and subsequent eras and saw something different: the people were an indigenous population (not infiltrators from beyond Jordan) responding to a general recession.

So rather than accept the continuities and indigenous evidence or because of the ambiguities in the evidence, Whitelam writes that historians are still obsessed with the identity of these highland villagers and invent another label to control the past and make it what they want to find. They began with the Bible and the later monarchy and used that as the starting point. This led to seeing the highland villagers at beginning of the Iron Age as progenitors of the monarchy.

Scholarship has considered alternative views on how the monarchy emerged; it has questioned the nature of the presumed united monarchy of the Bible; it has debated the monarchy’s timing — was it the tenth, ninth or eighth centuries? Scholarship has acknowledged the priority of Israel over Judah according to the fit of the archaeological evidence. Yet in all of these debates

the conceptual lock remains, since the underlying assumption is that some form of Israelite/Judean ‘state’ is the axis on which the history of the region turns.

I said above that Whitelam identifies the modern paradigm of “national histories” as a primary reason for the distortion of the history of ancient Palestine. He continues to explain:

Such histories stir strong emotions in us and perpetuate the assumption — we might say myth — that ethnic groups have a right to political and sovereign control over their historic territory, regardless of who may now live in it.

These sorts of nationalistic and ethnically based histories are imposed on the past and serve the present. In reality, however, such histories are founded upon contested ideologies and constructs. They assume that essentialist forms of identity are objective realities; they assume that those identities and cultures have remained constant throughout the ages. The reality is, of course, that these sorts of ethnic and cultural identities are constantly in flux. They are contested concepts, not rock solid realities. The modern clashes between cultures are projected back on to the ancient world.

And the consequence of this?

This obsession with ethnic labels has meant that historians have seldom, if ever, considered what are the most crucial questions faced by the villagers themselves: the struggle to survive, the harsh realities of everyday life, and the constant worry of whether or not there will be enough food to eat. The modern obsession with labels — the attempts to impose ethnic differences — is not appropriate for the ancient past and misses the significance of the growing body of evidence revealed in the long-term settlement patterns for our understanding of the history of the region. (p. xii)

Realities on the ground; ideologies and myths in the academy

Whitelam wants us to realize that there must have been countless movements of populations over the generations, with groups coming together and dividing and constantly changing their mix of shared identities — if only in recognition of shared problems of survival — that are lost from view to us today.

What is important for understanding the history of the region, according to Whitelam, is the movement and connectivity of the peoples, not some sense of ethnic identity imposed by us.

For those with a more philosophical interest in historiography the type of history Coote and Whitelam are undertaking is the “long term” and “deep trend” view of history pioneered by Braudel and known among historians as the Annales School. One might summarize this approach to the past as a study of the larger wood itself as opposed to individual trees; as a grasping of the big picture and long-term trends instead of exclusive attention upon particular wars and individual careers.

Whitelam’s concluding sentence in the Preface sends, I think, a most depressing message:

The rise of the biblical history movement and ‘new biblical archaeology’ means that the project envisaged a quarter of a century ago is even further away from realization today than it was back then.

9 thoughts on “The Dark Resurgence of Biblical History”