Continuing the series from Nur Masalha’s Expulsion of the Palestinians. . . . 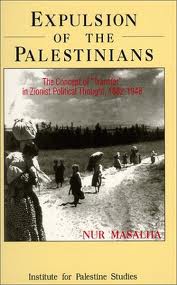 The reason for this series is to make readily accessible the evidence that helps us understand the current situation in Palestine. This evidence informs us of the intentions and goals that the Zionist leadership had for the way their Jewish state would look and operate into the future. (Once complete I will compile the posts into a single block.) Some readers have asked me to focus on the events of the 1948 war between Israel and the Arab states because that is where the real roots of the current problems are found and I do hope to write about the 1948 war and detail the origins of the refugee. One of the several Jewish historians of this period that I will refer to will be Benny Morris who fully justifies the events that led to the dispossession of the Palestinian Arabs. It should go without saying that nothing in these posts can validly be construed as anti-semitism or justification for the murderous crimes of any form of terrorism.

The previous post, The Necessity for Mass Arab Transfer, outlined the responses of the various Jewish factions towards the British government’s Royal Peel Commission Report in 1937. This post covers the Jewish Agency’s response to the question of Arab transfer after their rejection of the Peel Commission’s plan for partition of Palestine.

The Twentieth Zionist Congress empowered the Jewish Agency to negotiate on the precise terms of the future Jewish state. To prepare for this the Agency established several advisory bodies including one (November 1937) named the Population Transfer Committee. Some of the members are listed below. Notice how many of the names became prominent leaders of the new state of Israel once it was established.

At the 21st November 1938 meeting Weitz introduced his plan for Arab transfer explaining it was based on two main assumptions:

the transfer of Arab population from the area of the Jewish state does not serve only one aim — to diminish the Arab population. It also serves a second, no less important, aim which is to evacuate land presently held and cultivated by the Arabs and thus to release it for the Jewish inhabitants.

For the above reasons most agreed that any evacuation had to start with the most difficult challenge: the transfer of the peasants and rural population. Only then would the new government turn its efforts to removing the townspeople.

The second assumption arose out of Britain’s backing away from any idea of compulsory transfer in its submissions to the League of Nations. This left the Jewish committees without any visible force necessary to carry out Arab transfers.

Weitz calculated that this first transfer phase would remove 87,300 Arabs and the purchase of 1,150,000 dunums mostly in Transjordan for their resettlement. A further 10 to 15 thousand Bedouins living on livestock could also be removed in this phase.

Such a plan would see the Arab population reduced by one third within two to three years.

The chairman of the committee, Thon, agreed with Weitz that the plan was practical as a first step.

Bonné opposed plan. He wanted to see a plan for the removal of all the Arabs within ten years. He also recommended that the committee not give up so easily on the idea of compulsion. Compulsion had been first suggested by the English, he said, and besides, they were not talking about “full” compulsion since they wanted as much cooperation as possible helped along by the application of some pressure.

The solution, Bonné suggested, was to link Arab transfer to new agrarian legislation when the Jewish state was established. They would need to decide on a target date for removal of the Arabs so they would know how quickly to move against them.

Bernard Joseph agreed that partial transfer was not the answer.

According to Weitz’s account of the meeting both Bonné  and Joseph wanted to use force to remove the entire Arab population.

Eshbal argued that it would be necessary to first move not only the cultivators of the land but along with them all those directly or indirectly dependent upon them.

After the above discussion the plan was forwarded to Shertok.

Shertok identified two flaws in the plan in his letter of 31 December 1937 to Bernard Joseph: END_OF_DOCUMENT_TOKEN_TO_BE_REPLACED