Hector Avalos, known to most of us for The End of Biblical Studies and Fighting Words: The Origins of Religious Violence (discussed across 5 Vridar posts) has had a new article published in Ames Tribune . . .

Two paragraphs from the article:

Bill Maher, the atheist humorist, believes Islam is entrenched in the Middle Ages . . .  Thomas Friedman . . . believes that Islam needs the equivalent of the Protestant Reformation, while others deem Islam to be inherently incorrigible.

Many of these commentators overlook how much of the Muslim jihadist view of blasphemy derives directly or indirectly from the Bible, the foundational text of Christianity. Yvonne Sherwood’s Biblical Blaspheming: Trials of the Sacred for a Secular Age (2012) discusses some aspects of the long reach of biblical blasphemy laws in western culture.

For most secularists/pluralists, you must blaspheme — or else your freedom of expression will inevitably be hostage to one religion or another.

Holy Jesus, I nearly forgot to cite my source for this story — h/t John Loftus on Debunking Christianity, thank God.

This one is not really about “religion and atheism” but it’s worth including here to get the message out the sooner – – – –  Peter Kirby has done us another favour by creating a Biblical Criticism Search Engine.

Now you can search the greater Biblical Criticism Blogosphere, a carefully curated collection of websites, blogs, books, articles, and resources containing about 30 billion web pages indexed and searchable with a Google Custom Search Engine. The search prompt can be found here:

PZ Myers of Pharyngula alerts us to a bloggingheadsTV discussion where I find some of my own reservations re Sam Harris, Richard Dawkins and Chris Hitchens brought out into the open:

Jeet Heer and the New Atheism

I don’t see the point of having an atheism that is pro-status quo, pro-imperialist, and which is indifferent to issues of inequality and patriarchy. If you’re going to have that, you might as well go to church.

That the New Atheism has already become part of a doctrinaire, anti-social justice attitude is troubling, but I think it was there from the beginning. The Thinky Atheist Leaders who carved out this niche clearly didn’t think those issues were important — even while some of us who happily jumped on the New Atheist bandwagon thought they were, and were simply oblivious to the indifference of the horsemen who were galloping into the fray. Now some of us who were trotting along with the rest of the cavalry are drawing back . . . .

It’s very uncomfortable. Maybe I’m a New Atheist in some ways, but not in other ways, and maybe I need a new banner to rally under, or maybe we need to just let the leadership blunder into the cannons while the rest of us regroup and refocus. . . .

It’s a tough place to be, sacrificing all that momentum while we mill about and try to figure out a rational approach. But that’s what atheists should do: think.

The Second Wave of New Atheism is Here

Dr. Hector Avalos tells me that in his forthcoming book, The Bad Jesus, he speaks of a Second Wave of New Atheism, which he defines as atheist advocates “who have more formal training in philosophy, biblical studies and theology.”. . . .

Many of us have probably seen Stephen Fry’s delicious account of what he would say to God at the Pearly Gates:

It’s worth repeating until learned by heart.

The point here is that Mano Singham has found the pious intellect of Giles Fraser responding sagely to Fry. In the interests of fair play and equal time here it is: 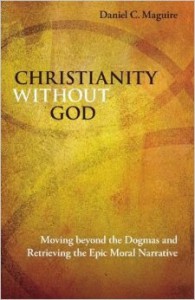 Gavin R or Otagosh has found one of those curious hybrids:

Today I learned that this troublesome priest has outed himself as – shock, horror – an atheist.

In an interview with Religion Dispatches he talks about his new book Christianity Without God . . . and makes some memorable remarks.

“I think the main passion of the conservative mind is fear… Fear makes you reach for a supernatural insurance policy.”

Unlike all too many of those who have transitioned from various forms of Christianity to godlessness, Maguire retains the ability to engage in the conversation without the smug, tone deaf invective that shuts off communication rather than opening it up.

Here’s another story of a religious person meeting atheism but this time finding a different outcome. It’s by self-described “God-nerd” Christian Piatt:  END_OF_DOCUMENT_TOKEN_TO_BE_REPLACED