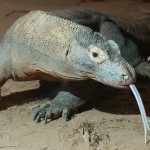 So what’s going on here? Why does Luke make Mary look so absurdly naive?  END_OF_DOCUMENT_TOKEN_TO_BE_REPLACED