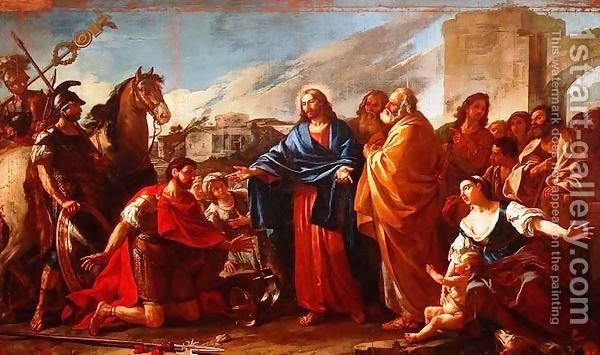 In Luke 7 we read about Jesus being urged by his fellow Jews to have special sympathy for a Roman centurion whose beloved servant was at the point of death “because he (the centurion) loved” the Jewish people and had built them a synagogue.

The centurion heard of Jesus and sent some elders of the Jews to him, asking him to come and heal his servant. When they came to Jesus, they pleaded earnestly with him, “This man deserves to have you do this, because he loves our nation and has built our synagogue.” So Jesus went with them. (Luke 7:3-6, NIV)

A story so similar it is generally believed to be of the same event is found in Matthew 8. (Now if you do not believe the author of the Gospel of Luke knew the Gospel of Matthew then mentally re-adjust what follows to apply to the way Luke changed a tradition known to Matthew or to the way a tradition known Matthew’s spawned a mutation that eventually found its way to Luke.)

Matthew’s tale reveals a very different centurion. Not a word about his affinity with Jews. Rather, in Matthew’s account it is the centurion’s distance from Jews that establishes the whole point of the story.

When Jesus had entered Capernaum, a centurion came to him, asking for help. “Lord,” he said, “my servant lies at home paralyzed, suffering terribly.”

Jesus said to him, “Shall I come and heal him?”

The centurion replied, “Lord, I do not deserve to have you come under my roof. But just say the word, and my servant will be healed. For I myself am a man under authority, with soldiers under me. I tell this one, ‘Go,’ and he goes; and that one, ‘Come,’ and he comes. I say to my servant, ‘Do this,’ and he does it.”

When Jesus heard this, he was amazed and said to those following him, “Truly I tell you, I have not found anyone in Israel with such great faith. I say to you that many will come from the east and the west, and will take their places at the feast with Abraham, Isaac and Jacob in the kingdom of heaven. But the subjects of the kingdom will be thrown outside, into the darkness, where there will be weeping and gnashing of teeth.” (Matthew 8:5-12, NIV)

The centurion in Luke also conceded that he was undeserving but only after the reader is told just how very deserving he really is! Not so in Matthew. In Matthew it is the centurion’s gentile-ness, his distance from the rightful “children of God”, that makes his faith so astonishingly exemplary.

In Matthew the gentile is exalted as the exemplar for the Jews. In Luke he is blessed because of his love for the Jews: the Jews take pride of place.

Why would Luke have made such a change?

Before continuing let’s get some identification preliminaries out of the way. Let’s assume that the “Luke” I’m speaking about is the same author who wrote Acts. Even if we doubt that he was the same person responsible for the original version of the “Gospel of Luke” I am assuming he was at least for the final form of the Gospel we know today and also the author of Acts.

This author ties Luke-Acts together with a very clear theological theme. Christianity began with the Jews, with the Temple worship, and from there, through small stages, gradually spread out to the gentiles. The first gentiles to be called were themselves intimately bound to the Jews with their original worship, whether at the Temple (the Ethiopian eunuch converted by Philip as he was returning from a Jewish feast) or in the synagogues (as we find repeatedly in Acts where Paul initially preached in city after city to both Jews and “god-fearing” gentiles in synagogues).

The first gentile to be “officially” called was another centurion, Cornelius, in Acts. God gave Peter the famous vision of a wild and domestic animals symbolic of both gentiles and Jews that led him to visiting Cornelius, only to discover that God had given him the Holy Spirit before Peter could even baptize him. Cornelius is described as a “god-fearer” and is clearly presented as one who follows a form of worship in close relationship with the Jews.

[Cornelius] and all his family were devout and God-fearing; he gave generously to those in need and prayed to God regularly. . . .

The men replied, “We have come from Cornelius the centurion. He is a righteous and God-fearing man, who is respected by all the Jewish people. A holy angel told him to have you come to his house so that he could hear what you have to say.” Acts 10:2, 22

Afterwards we find Paul’s gentile converts were on the whole converted as a result of their religious proximity to the Jews. Many scholars and general readers believe these “god-fearers” were originally proselytes.

Standing up, Paul motioned with his hand and said: “Men of Israel and you Gentiles who worship God, listen to me! , , , ,

As Paul and Barnabas were leaving the synagogue, the people invited them to speak further about these things on the next Sabbath. When the congregation was dismissed, many of the Jews and devout converts to Judaism followed Paul and Barnabas, who talked with them and urged them to continue in the grace of God. . . .

But the Jews incited the God-fearing women of high standing and the leading men of the city. They stirred up persecution against Paul and Barnabas, and expelled them from their region.  (Acts 13:16, 42-43, 50)

So he reasoned in the synagogue with the Jews and the God-fearing Greeks, as well as in the marketplace day by day with those who happened to be there. (Acts 17:17)

Then Paul left the synagogue and went next door to the house of Titius Justus, a worshiper of God. (Acts 18:7)

Actually such a scenario — the gentile church beginning with proselytes first hearing the gospel in the synagogues — runs into a number of major problems against the extra-biblical evidence and the letters of Paul. I will spell out these problems in a future post. For now we need to at least see Luke’s ideological intent. He begins with Jews, then gradually eases from these through “Hellenists” in Jerusalem and through Samaritans eventually to reach gentiles, ever so methodically via the Jews at every step, via synagogues where Paul spoke.

Even the birth of Jesus is closely connected to the Temple: note that the whole story begins with John the Baptist’s father, Zechariah, in the Temple and concludes with the circumcision and prophetic blessings of Jesus at the Temple.

So when Luke read in Matthew (or when he heard independently of Matthew) the story of Jesus praising a gentile who stood apart from the Jews as unworthy by sheer fact of his non-Jewishness, and then rewarding that gentile’s faith with a miracle, and using that gentile’s faith as a segue to condemn faithless Jews who would be cast out from the kingdom of God, he stamped his foot in exasperation. He took up his own pen and put a more (to him) theologically correct spin on the story.

6 thoughts on “Why Luke Changed a Jesus Miracle Story”