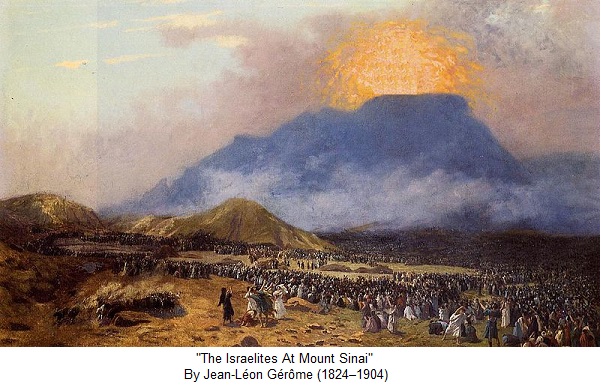 Now where is any of that in Exodus? William Propp continues:

It seems to me that these, too, are present in Exodus, albeit slightly disguised. The theme of Yahweh testing Israel dominates 15:23-17:16. The nations of Amalek and Midian (i.e., Jethro) show up near God’s mountain, but are not the Chosen (17:8-18:27).* Israel alone is transfigured into a “priestly kingdom” (19:6) and joined in a permanent union with God by the Covenant. In a sense, Yahweh and Israel get married.** They do not, however, live happily ever after.

Further, look how this argument is extended beyond the original biblical tale in the footnotes:

* The Midrash even imagines God offering the Torah to various nations, i.e., Proppian False Heroes. Of these, only Israel, the True Hero, is willing to accept the Law (Ginzberg 1928: 3:80-82)

Now imagine the furore that would be raised in some quarters if the same type of analysis were applied to Jesus by anyone who had expressed doubts about the his historicity! “Parallelomania gone mad.” “Rewriting Propp to make the theory fit.” “Intellectual dishonesty.” “Argues like a Creationist.”

So how has William Propp’s commentary on Exodus been received by his academic peers?

By Thomas Dozeman in The Catholic Biblical Quarterly, 63, 2001:

Propp advances our understanding of the Book of Exodus beyond Childs in a number of ways. . . . P’s interest in folklore enriches the commentary at many points . . . . [B]uilding on the research over the past decades in comparative religion and folklore, with a focus on the work of V. I. Propp. His interpretation of the Passover is especially rich . . . These strengths and others ensure that P’s commentary will be a resource for all of us who are interested in interpreting the Book of Exodus.

The Editor of The Expository Times,

The commentary is likely to become essential for serious students of the book.

While a significant portion of the commentary treats text-, source-, and redaction critical aspects of the book of Exodus, the commentary’s main methodological focus, as evidenced in the notes and comment, is a narrative study of the text whose principal element is folktale analysis. According to the author, Exodus in many ways follows the plot type of the heroic adventure or fairy tale as described by V. I. Propp. There are significant differences, however, since Exodus has three heroes: Moses, Israel, and Yahweh. Beyond this, the author’s anthropological and cultural approach seeks to understand ancient Israelite social institutions. The author’s interpretation of the Pesah-Massot as a rite of purification and riddance found in the comment on Exod 12:1-1.3:16 is representative of this approach. Also, Israel’s migration from Egypt to Canaan may be described in terms of a rite of passage, since Israel performs a special blood ritual and leaves Egypt marking its change of status from slavery to freedom. The narrative analysis of the commentary also includes a treatment of the unifying themes in Exodus. . . . .

The primary strength of the first volume of Propp’s commentary on Exodus is its drawing together of several important analytical approaches into the orbit of its treatment of Exodus. As described above, the commentary includes a wealth of information within its scope, making it a useful volume and a joy to read.

Propp employs methods not used extensively in other commentaries on Exodus, especially formalist approaches pioneered by Vladimir Propp (no relation). In so doing, he lays bare textual structures and linkages others have never noticed. These frequently lead him to significant interpretive conclusions; this commentary is an outstanding example of how perspectives from outside biblical studies can be combined with traditional philology to produce exciting yet firmly anchored interpretations. For example, Propp’s reading of YHWH’s attempt to kill Moses on the road to Egypt (pp. 232-38) is an interpretive tour de force, combining philology, anthropology, close reading, theological sensitivity, and exegetical pluck.

Does anyone expect the same types of responses should there be a similar study applied to Jesus?