I have just pre-ordered The Gospel on the Margins: The Reception of Mark in the Second Century by Michael Kok. I have 49 days to complete my other reading before it arrives.

Michael has stopped regular blog posting but fortunately keeps his blog as a great resource [link is to last entry on his blog] for studies of the Gospel of Mark:

Here’s what sold Gospel on the Margins to me (taken from Kok’s blog post):

“Controlling abundant primary evidence with fine analysis of biblical and patristic scholarship, Michael Kok reopens the question of Mark’s ambiguous authority in second-century Christianity. That the Gospel lay in the crosshairs of ancient disputes over incipient orthodoxy is a creative proposal, vigorously argued, which merits reflection and testing.”

“In this invigorating and informative study, Michael J. Kok surveys who knew what about Mark’s Gospel during the second century. In an extremely useful and readable form, he assembles the available evidence and advances the striking hypothesis that early Christian writers were often hesitant to use Mark because they viewed it as susceptible to misuse by rival factions. Kok’s thesis is bold, provocative, and argued with great energy. Moreover, if it is judged correct, it casts significant light on some of the significant forces and dispute at work in the early Christian movement.”

– Paul Foster, the University of Edinburgh

“The Gospel on the Margins is part of an increasingly prominent trend in scholarship which looks at the early receptions of the Gospels. In his combination of traditional exegetical approaches with theoretical concerns about “reception” and “centrism”, Kok provides a distinctive, learned and important contribution to the debate. For anyone interested in the earliest receptions of Mark’s Gospel, and the Gospels more generally, Kok’s impressive book will be required reading.”

– James Crossley, the University of Sheffield

“Michael Kok has written a remarkable book, full of implications for the study of the early history of the Gospel of Mark and for Christian origins generally. His argument that the Gospel of Mark was hardly read in the second century, except perhaps by a fringe group in the developing coalition of Christian groups, is utterly convincing. Kok’s argument that the gospel received a place in the emerging Christian canon not because of its intrinsic merit but because it was confiscated for the canon as a way of further marginalizing a group that treasured it, is provocative and persuasive. Kok’s scholarship is impeccable, and he makes his novel argument with great clarity. New Testament scholars and historians of early Christianity, take note!”

– Willi Braun, the University of Alberta

“New Testament scholars love the Gospel of Mark. It is our earliest portrayal of Jesus but also the most unorthodox; its origins are well-documented in antiquity, yet, with good reason, most of us discount this evidence. It confounds and delights. Michael Kok does much to dispel some of the mysteries behind the creation and early reception of the Gospel, bolstering Willi Braun’s theory that early church writers were ambivalent to Mark because of its appreciation by so-called ‘heretics.’ He carefully adjudicates between previous approaches to the evidence, showing particular caution in his treatment of the still-controversialSecret Gospel of Mark (wisely reserved for discussion in an appendix), which, if authentic, would contribute much to his argument. In all, the book is a deftly-written, comprehensive resource for those seeking answers to Mark’s most challenging questions.” 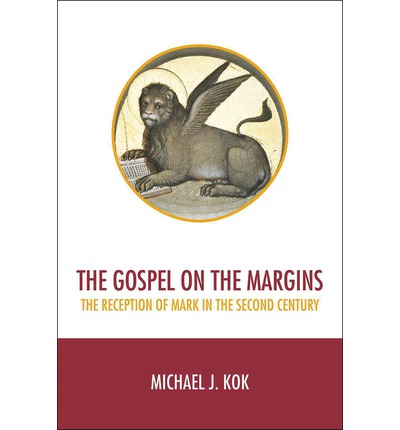 3 thoughts on “49 days to go — Mark, Gospel on the Margins: the Reception of Mark in the Second Century”