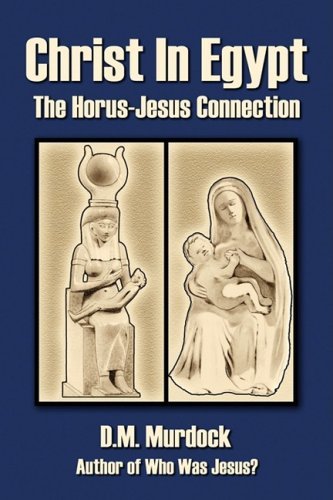 We are currently in a position to recognize fully our natural surroundings, based not on blind belief but, rather, on scientific observation as well as aesthetic appreciation. Regardless of religious beliefs or nonbeliefs, as human beings we can all relish the splendor of the natural world, with most people able to cherish an exquisite sunset or full moon, for example. . . . .

The comprehension of the astrotheological and nature-worshipping perception behind the world’s religious ideologies and greatly imaginative and creative capacity of the human mind but also the beauty and awe of creation that inspire and unite mankind beyond the divisive and destructive beliefs. In the end we are free to develop true human community based . . . on shared, common experiences and reference points, such as the mysterious and marvelous planet upon which we all live. (Christ in Egypt, p. 521)

And if there is any doubt about what she means by this humanity saving comprehension of astrotheology, Murdock makes it clear in the Introduction:

Astrotheology — the reverence for the sun, moon, stars, planets and other natural phenomena . . . . (Christ in Egypt, p. 17)

Now we understand more clearly why Robert Tulip speaks worshipfully of the restoring the “dignity” of the moon to its “rightful” place and excoriates those of us who do not duly “respect and honour” the scientific facts of the planetary system. It also explains why Murdock in the above quote limits her examples to sunsets and the full moon: appreciation of waterfalls, flowers, other positive attributes of our fellow species, etc., etc., would distract from her intended point.

[Note: A version of this post appeared earlier on earlywritings.com.]

9 thoughts on “The Confessional Epilogue: Christians and Acharya”