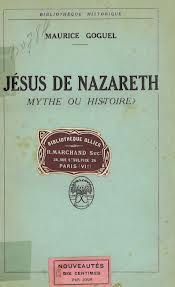 Maurice Goguel prefaced his book against mythicism, Jesus the Nazarene, Myth or History?,  with these opening words:

The question of the historical character of Jesus is one of present-day interest. It has once again been ably raised by Monsieur P. L. Couchoud in a small volume of considerable literary value and high spiritual inspiration. (Preface)

I have covered the contributions of Paul-Louis Couchoud to mythicist argument in a series of posts now archived at Couchoud: Creation of Christ. Of all mythicists prior to Earl Doherty Couchoud’s thesis comes very close to that of Doherty’s in many respects. Both argue for Christian origins with a Christ who was evidently a spiritual and heavenly figure at all times in the writings of Paul and the other pre-gospel writings. Doherty had come across Couchoud’s work in his own early explorations but the arguments in The Jesus Puzzle and Jesus: Neither God Nor Man nonetheless bear the marks of independently arriving at several of the same conclusions.

Of Couchoud himself Goguel wrote a few lines later:

The intellectual loyalty of M. Couchoud, the sincerity and vigour of his thought, the loyal effort which he has made to penetrate into the spirit of primitive Christianity, are worthy of full respect, but this homage which it is a pleasure to pay him does not prevent our seeing in his book the dream of a poet rather than the work of an historian. (Preface)

Some modern anti-mythicists could learn how to engage in debate with a little civility from Goguel.

So what is Goguel’s purpose in his book? Is it to engage and rebut the arguments of Couchoud and other mythicists? Or is he going to bypass mythicist arguments and argue separately why he believes Jesus was historical?

The problem of the historical character of Jesus is one of fact. It is entirely in the region of fact and by this historical method that we shall attempt its solution to decide whether modern criticism since the eighteenth century has entered a blind alley . . . . (Preface)

That sounds as though Goguel’s primary interest is to show what he believes are the facts supporting the historical existence of Jesus. He gives no hint that he is going to actually address Couchoud’s or others’ arguments.

He makes this intention clearer a little later in his opening chapter. END_OF_DOCUMENT_TOKEN_TO_BE_REPLACED