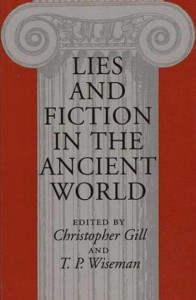 One of my earliest posts asked what Josephus might have said about the worth of the Gospels as history had he read them. In preparation for my final post on historical-critical methods with Stephen’s martyrdom as a case study I have come across (as another commenter also did) a chapter in Lies and Fiction in the Ancient World titled “Lying Historians: Seven Types of Mendacity” by T.P. Wiseman.

The reason for this post is to enhance awareness of one aspect of the nature of ancient historical writing whenever we think about Acts of the Apostles (or even the Gospels) as histories of sorts. (All bolding in all quotations is mine.)

Wiseman begins with line from Seneca, of the first century CE, where he dismisses a theory about comets by a certain Ephorus:

It takes no great effort to refute him—he’s a historian. (p. 122 in Lies and Fiction; original in Quaestiones Naturales, 7.16.1f)

Seneca explains why he has such a dim view of historians of his day:

Some historians win approval by telling incredible tales; an everyday narrative would make the reader go and do something else, so they excite him with marvels. Some of them are credulous, and lies take them unawares; others are careless, and lies are what they like; the former don’t avoid them, the latter seek them out.

What the whole tribe have in common is this: they think their work can only achieve approval and popularity if they sprinkle it with lies.

Seneca at another time parodied historical writing as the narrator of Apocolocyntosis (The Pumpkinification of Claudius):

I want to put on record the business transacted in heaven on 13 October . . . No concession will be made to umbrage taken or favour granted. This is the authentic truth. If anyone inquires about the source of my information, first, I shan’t reply if I don’t want to. Who’s going to compel me? . . . If I do choose to reply, I’ll say whatever trips off my tongue. Who ever demanded sworn referees from a historian? But if it is obligatory to produce the originator of the account, let the inquirer ask the man who saw Drusilla on her way to heaven.

Classical historians ought to have learned from the Christians that the criterion of embarrassment would have compelled belief in a resurrection if the eyewitness had been a woman and not a man. Seneca’s jibe would then have fallen flat, no doubt. Meanwhile, anyone in a seminary who has been fed the argument that detailed dates (compare Luke 3:1-2) and claims to be telling the truth (Gal. 1:20; Luke 1:1-4) are all indicators of an honest account might easily become the butt of Seneca’s joke.

Seneca’s historian joke hangs upon the principle that historians were “supposed” to always be telling the truth and nothing but the truth. This is found in what Wiseman describes as “the only theoretical discussion of historiography that survives from antiquity”, Lucian’s How to Write History (mid second century CE):

The historian’s one task is to tell it as it happened . . . the one particular characteristic of history is this, that if you are going to write it you must sacrifice to Truth alone. (p. 122)

The context of this maxim, however, would appear to limit the “Truth” to avoidance of both tall-tales or myths (which are more appropriate to poetry) and obsequious flattery of rulers and other persons of power.

The reputation of historians had not improved by the fourth century CE. We read from that period in the Historia Augusta the following conversation:

Tiberianus maintained that much of [historian] Pollio’s work was brief and careless. I protested that as far as history was concerned there was no author who had not lied about something. I went so far as to cite the places where Livy, Sallust, Cornelius Tacitus and even Trogus were refuted by clear evidence, at which he yielded to my argument and jokingly held up his hand. ‘All right then,’ he said, ‘write what you want. You can safely say whatever you like, and you’ll have those admired masters of historical style as your companions in mendacity.’ (p. 124)

The subtitle of Wiseman’s chapter is “Seven Types of Mendacity”. So what are the seven types of lies historians of the day were prone to tell?