Brodie’s discussion of the four Greco-Roman source references to Jesus is brief.

Nero . . . punished with . . . cruelty, a class of men, loathed for their vices, whom the common people [the vulgus] styled Christians. Christus, the founder of the name, had undergone the death penalty in the reign of Tiberius, by sentence of the procurator Pontius Pilate (Loeb translation). (p. 167, from Annals, 15.44)

Brodie essentially repeats John Meier’s own discussion found on page 91 of volume 1 of A Marginal Jew, commenting that there is nothing here that would not have been commonplace knowledge at the beginning of the second century. (Brodie relies upon the reader’s knowledge of Meier’s work to recognize this as Meier’s own position.)

Brodie adds that Tacitus regularly used older writings and always adapted their contents to his own style. As pointed out by Charlesworth and Townsend in the article on Tacitus in the 1970 Oxford Classical Dictionary Tacitus “rarely quotes verbatim”. By the time Tacitus wrote, Brodie remarks, some Gospels were decades old and “basic contact with Christians would have yielded such information.” His information could even have been inferred from the work of Josephus.

[They] are often quoted in this regard, but in effect they are simply reporting something about what early Christians say or do; they cannot be said to supply us with independent witness to Jesus himself (Marginal Jew: 1, 91). (p. 167)

Conclusion regarding the five non-Christian authors

Brodie thus concludes that none of the five non-Christian authors provides independent witness to the historical existence of Jesus.

General conclusion regarding A Marginal Jew

Brodie’s conclusion about Meier’s famous work is applicable to most notable works attempting to explore the historical Jesus. It/they provide us with invaluable background information for New Testament times and much in the way of treasured insights into the New Testament itself. In such works, we learn much about the history, sociology, economy, and archaeology of the Holy Land. But the strength of Meier’s and comparable works is also their potential problem:

Brodie actually identifies the “root problem” of Meier’s A Marginal Jew in its very first page. There Meier writes:

To explain to my academic colleagues what I propose to do in this book, I often use the fantasy of the “unpapal conclave.” Suppose that a Catholic, a Protestant, a Jew, and an agnostic [What happened to the atheist?] — all honest historians cognizant of 1st-century religious movements — were locked up in the bowels of the Harvard Divinity School library, put on a spartan diet, and not allowed to emerge until they had hammered out a consensus document on who Jesus of Nazareth was and what he intended in his own time and place.

The Harvard Divinity School library is a very fine place, but if you are locked into it, you never reach some of the surrounding libraries that would provide a wider truer picture, particularly concerning first-century literature, of which the New Testament is a part, as is Josephus. (p. 168) 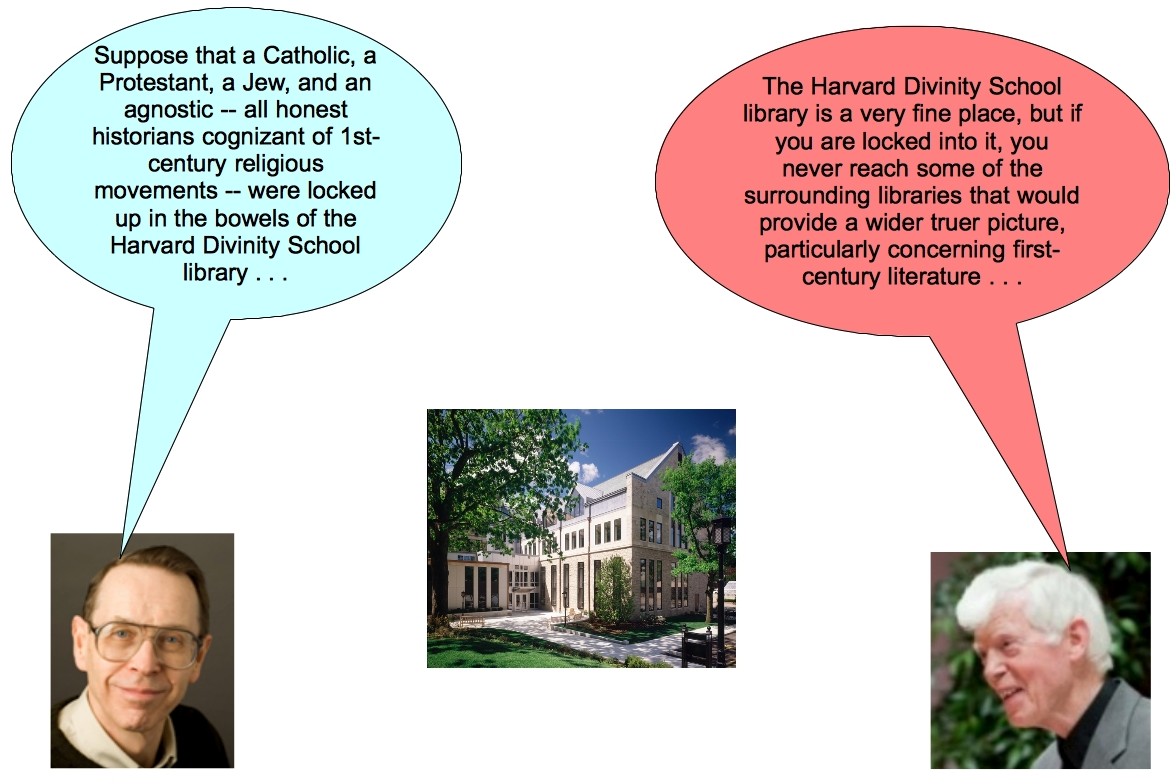 General Conclusion: the Nature of the Gospels, Acts and Epistles

A basic rule of method is that, all things being equal, the simplest explanation that also covers the largest amount of data is to be preferred. — Meier, Marginal Jew, 1, 67

In simplest terms, Brodie’s point is that “the main New Testament documents look historical but are not.”

These appear to be spontaneous letters written by one main figure as responses to specific historical situations. Detailed literary analysis, however, shows them to be constructed with “a degree of complexity and precision” with respect to both their sources and final shape that sets them apart as “formal epistles”, not spontaneous letters.

These imitate history. They do reflect their historical background. But literary analysis shows us what sources they used and how they used them, and shows us the nature of their art, so that we can see they are not history.

From here Thomas Brodie ventures into the theme of the final section of his book. He offers his opinion of the reason the authors made their work so “history-like”.

The history-like way of presenting the New Testament documents is not simply to reach people. It is an expression of the conviction that God is in human life, in the fiercely specific reality of history, even in events as horrendous as the crucifixion. . . . (p. 169)

That the New Testament literature is “history-like” but not historical is, Brodie concludes, “the simplest explanation that accounts for all the data”, and in saying this he returns to the quotation of John Meier that I have placed at the beginning of this section.

I will leave Brodie’s work for a short while now and focus on a few other things. I do need to return to finish part five of Beyond the Quest for the Historical Jesus in order to do Brodie justice to where he is coming from as a “mythicist”. The next section, Act 5, will be the hardest part for me to address adequately since the mind-set (especially towards scientific naturalism) and faith Brodie expresses are so contrary to my own.