In the discussions on the economy of Galilee in the time of Jesus, the presence or absence of large land-estates must play a significant role. Based on a reading of the parables attributed to Jesus, one could conclude that there were many estates of significantly large size and that they contributed to the economic conditions of Galilee causing loss of land and a growing rural proletariat. (From the abstract to “Did Large Estates Exist in Lower Galilee in the First Half of the First Century CE?” by David A. Fiensy, published in Journal for the Study of the Historical Jesus 10 (2012) 133-153)

This is indeed the image that has been conveyed by scholars like John Crossan and James Crossley who have applied theoretical models of socio-economic development to the Galilee region and concluded that extremes of economic oppression and divides between rich and poor were critical in explaining the appeal of Jesus’ teachings.

More generally, however, many have taken the implications of Jesus’ parables as clear evidence of the economic conditions of early first-century Galilee. This is so regardless of whether they have accepted the parables as having been literally spoken by Jesus himself.

David Fiensy informs us that scholars have assumed that the parables attributed to Jesus spoke of real economic conditions in Lower Galilee in the time of Jesus ever since the publication, in 1928, ‘Grossgrundbesitz in Palästina im Zeitalter Jesu’, Palästina Jahrbuch 24, pp. 98-113, by Johannes Herz.

Specifically, several of Jesus’ parables assume that there were large agricultural estates in ancient Palestine/ Israel. Certainly these estates were not as large as the celebrated ones listed above, but they were large enough to require tenant farmers, agricultural slaves, and bailiffs to care for the landowner’s farm.

Still other parables depict scenes on a large estate. The Parable of the Rich Fool (Lk. 12.16-21), for instance, describes an estate owner hoarding grain in a manner reminiscent of an account in Josephus (Vita 119) about the granary of Queen Berenice. Lk. 17.7 refers to a man’s servant plowing his field for him. Mt. 20.1-15 describes a large landowner who has so much land he must hire day laborers to work it. Lk. 12.42-43 alludes to a wealthy man who has a bailiff to run his estate.

The presence of large estates in Lower Galilee is crucial for understanding the society in the early decades of the first century. Their existence implies exploitation and dispossession of the small farmers and laborers. If they did not exist then we can infer “most peasants still lived on their own land and controlled their own economic destiny.”

This has significant implications for theories that relate Christian origins to Jesus’ appeal to economically oppressed and destitute — or some such variant of a Marxist hypothesis as we find in the works of the likes of Crossan and Crossley. Do economic conditions in Lower Galilee really contribute to our understanding of Christian origins?

Moving south of Lower Galilee, the western part of the Great Plain of Galilee (the Jezreel Valley or Valley of Esdraelon) certainly did consist of a large royal estate. But if this became a royal domain under the Hasmoneans and before the Judeans settled in the Galilee, then no Jewish peasants were dispossessed as a consequence.

But what of the Lower Galilee region itself, in particular the area around Sepphoris, Nazareth, and the Sea of Galilee, that is, the Bet Netofa Valley region? David Fiensy surveys literary accounts related to the region (Josephus and rabbinic references) and archaeological reports concerning buildings in Shikhin and Sepphoris. The literary evidence does point to wealthy landowners in the region in the latter half of the first century CE, but it is the archaeological evidence that I focus on here.

From the literary evidence it seems that most if not all of the Bet Netofa valley was owned by a few elites, among them Eleazar ben Harsom and, most likely, the Sepphoris aristocrats. During the Great Jewish War, Shikhin was pro-revolt while Sepphoris was pro-Roman. Shikhin was, therefore, destroyed along with Eleazar’s holdings. Between the wars, there was a Roman garrison in Sepphoris which came to the aid of Joseph ben Simai when a fĳire started. The estates of Bet Netofa Valley had by then been confiscated by ‘the king’, perhaps Vespasian (and his heirs), just as he confiscated them in the Great Plain after the war. He employed a Jewish administrator, Joseph ben Simai, to oversee his estates in the valley.

Shikhim according to the archaeological remains

These building sizes and wall thicknesses are rather large for a typical one- or two-room village house but not elaborate enough to have been the residences of well-to-do families. While the archaeological remains do not form ‘proof’, it is at least plausible that they were the dwellings of estate overseers, their administrative buildings, or their storehouses and granaries.

Sepphoris and its archaeological remains

[T]here is other archaeological evidence for the Bet Netofa having been a series of large estates, albeit this evidence is indirect. I refer to the houses in the residential section of Sepphoris (the Western Domestic Quarter) with their multiple rooms, courtyards, fresco paintings, and mosaic floors. These houses must have been built from some source of wealth. The most likely source was agriculture and the nearest prized land is in the Bet Netofa Valley. 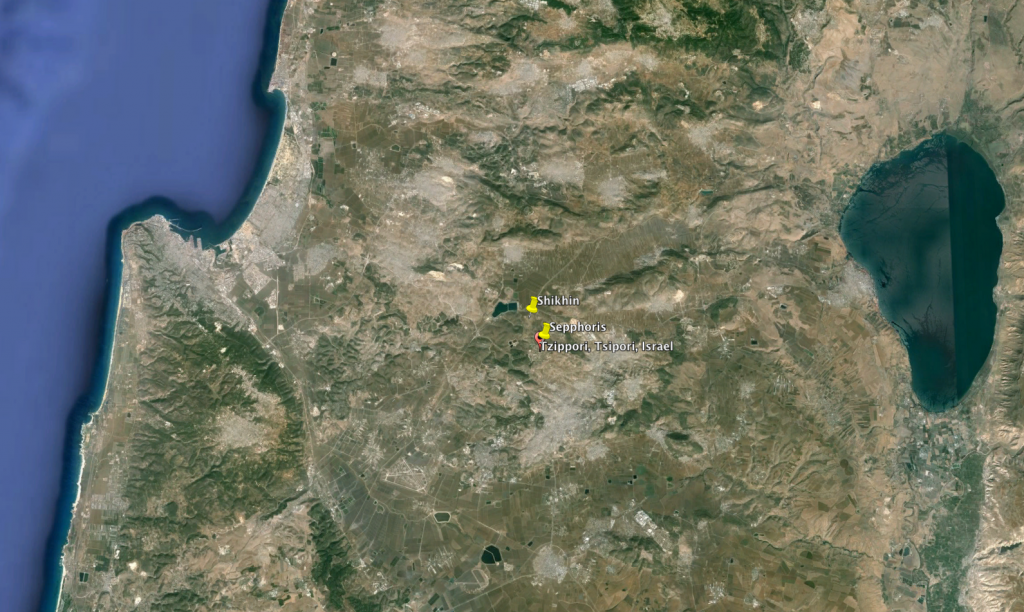 So David Fiensy believes it is reasonable to conclude that the Bet Netofa region was “owned entirely or mostly by the elite families of Sepphoris” before the war of 66-73 CE, and adds in support of this possibility:

We can further check this conclusion by arguing backwards.

Since only around 1 percent of the population could live in leisured wealth, if we calculate the total population of Galilee at 175,000, that means there were perhaps somewhere between 1500 and 2000 elites in Galilee. Let us say for the sake of the calculation that there were 1,750 elites. If we divide this number by two (since there were only two cities in Galilee, Sepphoris and Tiberias, and almost all elites lived in cities), we would expect around 875 elite persons in Sepphoris to have been supported by the Bet Netofa Valley. That number would equal, if we follow Arieh Ben-David’s suggestion for typical family sizes (6 to 9 persons per family or an average of 7.5 per family), approximately 116 wealthy families. The total land in the Bet Netofa (using F.-M. Abel’s figures) was around 6348 acres. If we divide these acres by the figure of 116 families, we have an average of 54 acres per family.

These elites then owned medium-sized estates.

Hans Dohr maintained that in the Roman Empire small estates ranged from 10–80 iugera (or 6–50 acres); medium estates from 80–500 iugera (or 50–315 acres); and large estates over 500 iugera or 315 acres. But a gentleman could live comfortably from a medium estate. There are plenty of examples of these sizes of estates providing a good income. At Pompeii landowners had usually estates of around 63 acres or 100 iugera. Cato wrote that this size was about right for the farm of a gentleman which would include vineyards, willow plantations, olive orchards, meadows, grain fĳields, forests, and acorn woods (Cato, de Agricultura I.7). Cato further observed that a farm of 100 iugera would require about 16 workers.

The estate at Beth Anath described in the Zenon papyri was around 40 acres. Interestingly, J. Herz estimated one of the estates alluded to in the Gospels as a 40-acre estate.

These would not have been extremely wealthy families compared to the land barons of the Roman Empire, but well off in comparison with the average free-holding farmer of Palestine/Israel.

Fiensy then throws into the mix another consideration:

But wealthy folk were known in the ancient world to possess multiple farms scattered in several locations throughout the Greco-Roman world. It is possible, therefore, that some of the Sepphorean aristocrats owned farms not only in the Bet Netofa Valley but also elsewhere in Palestine (like Eleazar ben Harsom), and possibly even beyond Palestine.

So David Fiensy concludes from this evidence that the well-to-do people in the Sepphoris region lived well behind the opulence that has been found around Jerusalem:

The suggestion that the elites of Sepphoris were, for the most part, families of modest wealth also harmonizes with what archaeologists have noticed about the houses in the western domestic quarter. They are nice but not as elaborate as those dis

covered in the Jewish quarter of old Jerusalem. If we compare the houses of the aristocrats of Sepphoris – those of the ‘western domestic quarter’ whose inhabitants, according to Eric Meyers, were ‘well-to-do aristocratic Jews’ – with aristocratic houses of Jerusalem, we notice some striking differences.

The houses in Sepphoris were certainly nice by ancient standards. They had multiple rooms and a courtyard. Many had fresco paintings and some had mosaic floors. Several were multi-storied. They were impressive for their time and place. But compared with the Jerusalem houses (excavated in the Jewish quarter of the old city), they were modest. For example, the ‘Great Mansion’ of Jerusalem had a living area of 600 square meters while a large house of Sepphoris (84.1) had an area of 300 square meters. The size difference alone is remarkable. Further, the small finds in the aristocratic houses of Sepphoris indicate modest wealth. They used bone instead of ivory for cosmetic applications. They employed common pottery, not fine ware. They imported no wines.

Thus based on the evidence of the houses from first-century Sepphoris discovered so far (Tiberias has not been excavated adequately for such an assessment) we would have to say that the extreme distance between the elites and lower class, found elsewhere in the Roman empire, and evidently in Judea, was diminished in Galilee. While there certainly was an economic distance between the two groups, it was not as great as in other regions.

David Fiensy thus sees evidence for medium-sized (not large) estates in the Bet Netofa Valley in the earlier decades of the first century CE. That is, the elites of Sepphoris simply did not compare with the opulence of their counterparts in Judea and elsewhere in the Empire. Their estates must have been of a far more modest size if the archaeological remnants of the Bet Netofa Valley are any guide. They were “families of modest wealth”.

Therefore, I would hesitate to affirm that the small farmers (or peasants) were being overly exploited by increasingly wealthy persons. That social dynamic was perhaps developing slowly but not yet in full bloom (though elsewhere in Palestine/Israel it seems to have been already a reality).

So do we have in these parables that presume vast extremes of distance between the rich and poor yet one more anachronism in the Gospels? Here is Fiensy’s concluding paragraph:

Finally, the picture one could visualize based on the Gospels’ parables and other indications seems to be largely inaccurate for Lower Galilee. The large estates implied in some of these parables were not, as far as the evidence has shown thus far, a reality for Galilee in the time of Jesus. One could doubtless travel just south of Nazareth and see them on the Great Plain, but there is no evidence for the 2000 to 3000 acre estates north of the Plain.

If that indeed be the case, then any hypothesis for the origins of Christianity that depends upon a socio-economic situation in Lower Galilee that pits the dispossessed and extremely oppressed against a fabulously opulent few must be discarded.