While teaching a class in Trinidad during the late 1960s Thomas Brodie found himself repeating a line he had heard from an experienced Dominican teacher in Rome, Peter Dunker:

the biblical account of Abraham was a story, a powerful meaningful story, but not historical.

His students challenged him. What did he mean by this? In Trinidad, with no-one else to ask,  he was forced to rely upon his own studies in the library, to apply historical-critical methods in his need to keep ahead of his students.

His initial answer was to explain that the early chapters of Genesis, Creation to the Tower of Babel, did not reflect historical stories of real persons, but that the rest of Genesis, from Abraham on, was different and did appear to be recording the lives of real people.

But the more he studied and questioned, the harder Brodie found it to accept as historical even much of the remainder of Genesis and the primary history (Genesis to 2 Kings):

Then the archaeologist Kathleen Kenyon established that the walls of Jericho had been demolished well before 2000 BCE, centuries before the supposed Exodus and time of Joshua.

Around the same time Trinidad was in political and social turmoil. The Church could not remain aloof. Demonstrators occupied the Catholic Cathedral and denounced an economic system that exploited the poor.

Some called for the demonstrators to be expelled the way Jesus had expelled the money-changers from the Temple. The demonstrators said they were in the role of Jesus expelling the wicked. Saint Paul was declared to be on the side of the revolutionaries: “He who does not work, let him not eat.” But Paul was also, Brodie comments, on the side of the oppressors. The motive of his charity was nothing but an example of Christian manipulation,

to heap fire on the person who received it. The Irish priests were an extension of the British Empire. (p. 22)

It was backed both by faith and by witnesses:

But even here there were problems:

Faith is essentially in God, and Christian faith does not require the truth of contradictory accounts of specific events — as happens sometimes between the Gospels.

As regards Josephus, Tacitus and the other non-biblical witnesses to Christ, some of them were always recognized as weak.

But the biggest problems were with the biblical witnesses. However much history there might have been behind the Gospels it was smothered in a heavy fog of theology. Their narratives were tales of faith, not plain history.

Besides, were the evangelists, and Paul, really independent of one another?

Or were they essentially copying from one another?

Meanwhile Albert Schweitzer had put a dampener on efforts to reconstruct the life of Jesus. The final paragraph of his 1906 publication of The Quest for the Historical Jesus became a classic:

He comes to us as One unknown, without a name, as of old, by the lakeside, He came to those men who knew Him not. He speaks to us the same words: “Follow thou me!” and sets us to the tasks which He has to fulfill for our time. He commands. And to those who obey Him, whether they be wise or simple, He will reveal himself in the toils, the conflicts, the sufferings which they shall pass through in His fellowship, and, as an ineffable mystery, they shall learn in their own experience Who He is.

The way was being cleared “for a new edifice of religious thought”, wrote Schweitzer. (I have singled out in past posts his hopes for Christianity being built upon a new metaphysic in place of an earthly historical event that would always be open to challenges.)

So from around 1920 to 1950 the main focus of New Testament scholarship had been on form-criticism or form-history — attempting to identify the forms of specific sayings and episodes in hopes of detecting their historical origins. Bultmann, “influenced by Gunkel’s eighteenth century Romantic ideas about people and writing”,

visualized Jesus stories in a rather Romantic way as ‘springing up’ among the early Christians, and has having virtually no link to the historical Jesus but as providing clues as to how these Jesus stories developed among distinct communities.

So the search for Jesus was replaced by a search for these distinct communities.

I recently posted on Käsemann and earlier on his distinct contribution to initiating the Second Quest for the historical Jesus. Hopes were revived that there might yet be a way to find “authentic” teachings of Jesus himself.

But there was, for Brodie, an even more significant development underway in biblical studies from the 50s and 60s . . . . 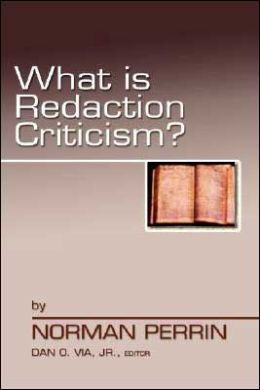 While the Second Quest was searching for the pathway to historical events behind the Gospels, there was another scholarly pursuit that was examining how those written episodes were assembled or edited into the wholes to create the Gospels we read today. These studies of the editing process (or redaction criticism) were of key significance for Brodie:

They started to move the focus from an elusive history behind the Gospels towards the Gospels themselves — the present Gospels in their finished state. And so, from the shadows, the Gospels would soon emerge once more as books! (p. 26)

Recall from Act One, Scene One, Brodie’s historical overview of the way biblical scholarship has had a difficult history working with the Bible with tools of literary criticism and insights. The Reformation ushered in the clouds of literalism and the view that what was important was the literal history behind the Bible’s stories.

This context thrusts into high relief the real significance of redaction criticism.

Brodie found himself doing the 1960s/1970s equivalent of blogging. He was fascinated and intrigued enough by all that he was learning to want to share it as widely as possible with the public. He wrote regular newspaper articles. Controversy followed. Meetings were held.

The fascination with these studies was equaled by the difficulty of some of them. The possible dependence among the five biblical sources for Jesus remained elusive. The Synoptic Problem was legendary.

Galileo, George Smith and Darwin had wedged apart old assumptions and opened up major insights. But there had been major advances even in grappling with the Synoptic Problem. The long-held view that the Gospel of Matthew was the earliest written gospel, most scholars were slowly coming to conclude that Mark’s Gospel was in fact prior. Matthew had expanded Mark.

This conclusion, the priority of Mark, was not reached overnight. It had taken decades of testing, of trial-and-error — essentially of carefully comparing Matthew and Mark, first to try to verify that one had really used the other, and then to figure out who had used whom. Detective work, but with much methodical plodding. And the same was done regarding establishing Luke’s dependence on Mark. (p. 27)

Meanwhile, other investigators continued to seek proof that the Bible’s tales were literal records of historical events. People continued, from time to time, to set off for Mount Ararat in quest after quest to locate Noah’s Ark.

Thomas Brodie was not losing any love for the Bible. On the contrary, he was — largely through his experiences of the disturbances in Trinidad — coming to appreciate its value as well as its vulnerability. Its value lay in its teaching of what is important in life; its vulnerability in that its hold on historical events was not strong.

It is easy for many to dismiss the literalness of the Jonah in the whale story without suffering any negative impact on their faith.

But in other biblical narratives the historical interpretation seemed more crucial. (p. 27)

Recall Brodie’s love of the Gospel of John. Now there were questions. At one level the Gospel was written to sound very much like history. But it differed so profoundly from the other Gospels and appeared to be the most concerned with theology as distinct from history.

Eusebius had quoted Clement of Alexandria as saying that

John, last of all, seeing that what referred to externals [literally, “to bodily things”] in the gospel of our Saviour was sufficiently detailed [in the other Gospels], wrote a spiritual gospel. (Ecclesiastical History, 6.14.7)

But modern scholars were still committed to finding history behind it. Renowned commentator on the Gospel of John Raymond Brown, Brodie tells us, often spoke of the pressure he was under from his mentor, William Foxwell Albright, to focus on history in his study of the Gospel of John.

Accepting the Gospel of John as grounded in history was a welcome antidote to Schweitzer’s influence in causing scholars to believe the recovery of the historical Jesus was impossible. With oral tradition in the mix, Brown revived the theory that this Gospel was formed out of an independent chain of tradition back to the historical Jesus.

At this point Brodie leaves Trinidad and we are about to move to Act 2 . . . .