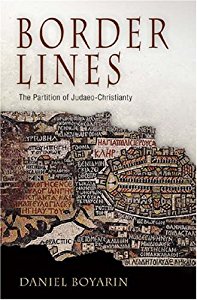 Boyarin puts a fly in the ointment of the legend that this event might be interpreted as the final rift between Judaism and Christianity. END_OF_DOCUMENT_TOKEN_TO_BE_REPLACED

What depresses me most about debates like the recent discussion over Western attitudes towards Muslims is the black and white view so many people have. “If you disagree with us you can only be wrong and not worth listening to.” “I can’t hear you because you are arguing against something I strongly believe and the way I view the world.”

Ideologically driven closed-mindedness can be found on both sides, of course. But bloody hell, what’s wrong with trying to maintain a sense of humanity and tragedy in the whole discussion? We are all human and talking about the fate of other humans, and there is a strong tragic streak running through the whole human condition on this stage.

Someone here recently said he found Muslims are no different from us in their everyday concerns. That such a statement was thought worth pointing out (and it is!) speaks volumes for how semi-barbaric much of the discussion has become.

There are anti-war activists who have sons and daughters on willing active service (volunteers) in Afghanistan and Iraq. In a good number of those I have reason to believe they are very close to their children despite ideological (or generation) differences.

There are Muslim parents who will mourn to their graves their loss of a son or daughter to a suicide-bombing recruiter and families of those who lost loved ones in 9/11 who have visited some of those Muslims.

It would be good to keep all those sorts of families in mind when engaging with supporters of one side or the other.

The world is not black and white. There is no iron curtain or tentacle-extending behemoth. Except in our fears. There is evil that needs to be faced. Sometimes that means having the courage to be sure we ourselves are not the proverbial evil we have projected onto others. Tragedy needs a catharsis, or it truly will become unbearable.