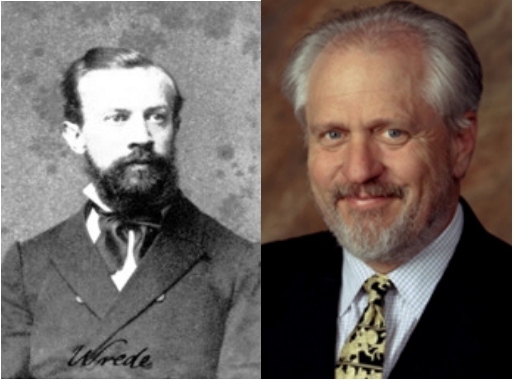 MacDonald argues that the alert reader can see a pattern in the way Jesus would sometimes make an effort to silence others while at other times encouraging them to declare widely a miracle he had just performed. (Wrede says there is no pattern. There is only contradiction and tension.) MacDonald says that this pattern is discerned when one compares the Gospel with another famous work in which the chief character, Odysseus, strives to conceal his identity to nearly all except a few close associates (to whom he reveals himself by “signs” that only they can recognise) until the climactic moment of killing and salvation.

Dennis MacDonald is probably best known today for his controversial The Homeric Epics and the Gospel of Mark in which he argues the Gospel is based in part on the Homeric epics, the Iliad and Odyssey, with Jesus modelled in part on Achilles and Odysseus. (This thesis does not deny that the evangelist simultaneously used Old Testament narratives as models for his Gospel: Thomas Brodie has demonstrated clearly enough that ancient authors regularly imitated widely diverse earlier works in the creation of a new composition.) Now I like a lot of things about MacDonald’s thesis, so much so that I have written an outline of it and added some of my own thoughts at my vridar.info site, The Gospel of Mark & Homer’s Epics. But there is something about his argument for the secrecy motif in Mark being modelled upon Odysseus’s efforts to hide his identity that troubles me.

MacDonald proposes four theses to support his case that Mark’s Jesus was hiding his identity from the authorities who would kill him if they knew it.

Thesis 1: Seldom are there secrets among friends

Jesus performed many miracles to which only his close disciples were witnesses. Not once did Jesus command silence:

Twice Jesus did order his disciples to be silent:

So when Jesus is among friends MacDonald observes that

Seldom. The reader of Mark must therefore try to figure out the reason Mark has Jesus not care about secrecy sometimes but make a point of it, even if only seldom.

Thesis 2: “Only mild anxiety” among foreigners

I’ll quote MacDonald in full here (though with my own formatting):

When in a public Gentile setting, Jesus shows only mild anxiety about rumors of his miracle working.

Thesis 3: “Most likely to insist on silence” among Jewish crowds away from their leaders

Jesus is “most likely to insist on silence” when among Jews where their leaders are absent.

Even though Jesus does not insist on secrecy after every miracle in a Jewish environment [no such command is issued after the healings at Gennesaret or after healing Bartimaeus], he does so far more consistently than when among Gentiles. (p. 145)

Does this reason explain why Jesus was angry with the leper?

Does this interpretation of Jesus’ secrecy explain why Jesus was angry with the leper who asked to be healed?

(Text criticism gives us good reasons for believing that the Gospel originally said that Jesus was “moved with anger” when the leper asked to be healed, and that the word was replaced with “compassion” by subsequent scribes and evangelists who were offended by the original reading: see Why Jesus Healed the Leper; and search the words leper and orgistheis in Google for more details and other arguments.)

MacDonald suggests that Jesus was angry for the same reason Odysseus was angry when his disguise was threatened with being uncovered. Healing a leper, according to the Mosaic Law, required a public act on the part of the one healed and a presentation to the priestly authorities. If Jesus wanted to conceal his powers from those authorities at this stage then we may wonder if this is why he was angry at being cornered with this healing request. Jesus took the leper aside away from the crowds after a grumbling protest, healed him then sharply ordered him to avoid the crowds and go straight to the priests according to the law, but apparently without telling them who had healed him. We know that the leper disobeyed and returned immediately to the city and proclaimed everything, with the result that Jesus felt a need to remain in the isolated region outside the city.

This argument sounds reasonable enough on the surface, but I have a few niggling questions about the details. Unfortunately I am not adept enough in the original Greek to know how to evaluate these details as well as I would like.

Besides, is Jesus really in fear of the authorities here or is he trying to avoid the crowds when they are likely to recognize him for some other reason? If he really feared the authorities why did he send the healed leper immediately to the priests?

Again, we have a rule (Jesus orders silence among Jewish crowds away from leaders) that is made to be broken.

Thesis 4: Never commands silence in the presence of the authorities

When Jesus and the authorities do come into direct confrontation, he keeps them flummoxed concerning his identity by means of evasion, metaphors, and sheer wit, much like Odysseus among the suitors.

Even though he seems to have understood that his miracle working might blow his cover, he healed a paralytic in the presence of “some of the scribes,” healed a man with a withered hand on the Sabbath while “the Pharisees” were in the synagogue, and cast out a demon in the vicinity of “some scribes.” These are the only miracles Jesus performs in the presence of the authorities, and quite appropriately none of them ends with a command to silence.

Those from whom Jesus wanted most to keep his identity a secret had themselves observed his powers. (p. 146, my formatting)

If anyone else has read MacDonald’s argument and has views on it I’d be interested in hearing them. Surely here is an inconsistency with MacDonald’s thesis: Why would Jesus demonstrate his powers (even “only sometimes”) among those “from whom he wanted most to keep his identity a secret”?

True, Jesus did refuse to perform miracles as signs to identify him when challenged to do so by the authorities.

Mark’s σημεῖον is the Koine equivalent of Homer’s σημα. In the Odyssey, characters test the hero by asking for signs that he was who he said he was, and he complied but only for those who had proven to be faithful. In the presence of his enemies, however, he avoided all revealing utterances and acts. . . . (p. 146)

But he didn’t always avoid all revealing acts, as MacDonald had earlier noted.

Is Wrede wrong or right?

Homer makes it clear to his readers why Odysseus disguised himself. There is never any confusion over why Odysseus reveals his identity to some people, why he commands them to be silent, and why he eventually declares his identity. This is not the case with Jesus in Mark’s Gospel. Readers need a guide to comment on each passage, and explain when we are reading exceptions to the rules to be set aside, if MacDonald’s theses are correct.

In response to all these exceptions and different tactics (with exceptions!) with different groups, Wrede would have objected with:

Why would the narrator give no hints if he was thinking now of one and now of another reason? What reader could guess his opinion. . . . One can therefore only suppose that he assumed the reader would read all these remarks with an idea which he did not first need to communicate to him. (Messianic Secret, pp. 37-38)

MacDonald returns to intertextual arguments linking passages in the Odyssey to others in Mark. He draws parallels between Jesus’ self-disclosure to the Sanhedrin several of Odysseus’s self-identifications to various persons. He further compares the Transfiguration in Mark 9 with Odysseus’s revelation to his son Telemachus, as we know from his book on Homer’s epics and Mark. But even if these intertextual cases are all sure signs that the author of the Gospel was influenced by his recollection of scenes from the Odyssey, it does not follow that the secrecy motif was necessarily based on Odysseus’s strategy.

He did not require silence of everyone. Instead, he most consistently insisted on silence when in a public, Jewish environment, where the authorities were absent. He never insisted on silence when the authorities were present, because they had seen everything for themselves. Once they cornered him into claiming to be the Messiah/Son of God, they wasted no time in seeing to his destruction on the charge of blasphemy. (p. 153)

Wrede points out that even as early as the opening chapters Mark conveys to readers his belief in Jesus as the Messiah/Son of God/Son of Man by placing such words and meanings into his mouth. Of course scholars discount the way Mark makes Jesus present himself as this Messiah from the start and attempt to re-write the Gospel to make it more historically plausible. But Wrede’s point is that the Gospel of Mark is not plausible as history and was never intended to be read like that. MacDonald is trying to find a consistently plausible story line where Wrede insists there is none.

I thank Tim Widowfield for his series on Wrede. It has led me to read Wrede with more attention and thought. I’d like to post something on the way Wrede shows that the Gospel of Mark is just as historically implausible and just as theological in all its sequences and scenes as is the Gospel of John. I’m beginning to wonder — probably way behind Tim on this point — that Wrede comes very close to explaining how a heavenly Christ of Paul came to find a life on earth in the Gospels. (Not that Wrede was a mythicist, of course.)

8 thoughts on “Where Wrede Went Wrong? MacDonald vs Wrede on Why Jesus Tried to Hide His Identity”