This is terribly sad. Aaron’s work has been central to what my own job is all about and what even this blog is in some ways about. 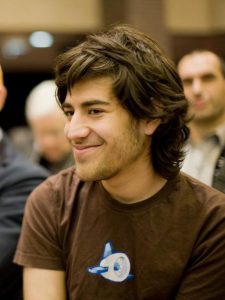 Whatever else Paul was, he was the greatest revolutionary in history when it comes to the God-concept. His ideas were completely unhistorical and at odds with Jewish teaching: he finessed his disagreements into a cult that turned the vindictive God of his own tradition into a being capable of forgiveness. Needless to say, the way he arrives at this is angstful and tortured, but he gets there in the end–not through tradition and law, but through a strategem: ”Christ the Lord.” His turnabout from Judaism was so complete that his only intelligent interpreter, Marcion, believed he must have been speaking of a completely different God. . . .

Hoffmann has argued that the most fundamental reason we should believe Jesus was a historical figure (at least the figure Hoffmann sees after he strips away most of what the Gospels say about him) is that he was so typical of his time. Paul, on the other hand, must be seen as so atypical of his time.

But leaving that discussion for another time, what I find odd in Hoffmann’s claims here is his view of Judaism in the time of Paul. He equates Judaism of Paul’s time with a vindictive God tradition incapable of forgiveness. I am astonished that Hoffmann would write such unsupportable caricature as if it were fact. His view is surely out of touch with most scholarship that has addressed this question.

Sad, it seems to me, that so much of the mythicist argument is based on what Paul does or doesn’t say about Jesus, considering there is a world of thought there that, cast to one side, makes it virtually impossible to know what Paul was talking about. Mythicism, among it many other dubious achievements, has achieved a new level of illiteracy in relation to Paul’s ideological and religious world. . . .

And this comes from someone who has recently argued that we can know that Paul was addressing the illegitimacy of Jesus when he wrote that Jesus was “born of a woman, born under the law” in Galatians 4:4! I have often addressed current scholarship on the writings of Paul. I know of mythicist arguments that draw reasoned conclusions on the basis of the scholarship specializing in Paul. I would like to see Hoffmann himself engage with Pauline scholarship itself, and arguments based upon it, rather than appear to completely bypass it and fault mythicists who take the trouble to take it seriously.

His “biographers” tell the story of a man who preached a kind of mock civil disobedience, but was as critical of Jewish legalism and ritualism as it was of Roman boots in Jerusalem. They tell us he gathered an unpromising following of women and yokels (Celsus’s words, not mine), failed to achieve whatever it is he wanted to achieve, and died among thieves as an enemy of the nation.

There is absolutely nothing improbable about this story. . . .

Unfortunately for Hoffmann’s case, this is the very story that the “biographers” do not tell about Jesus. This story is entirely what Hoffmann sees when he looks at the Gospels as if they are a Rorschach test. END_OF_DOCUMENT_TOKEN_TO_BE_REPLACED