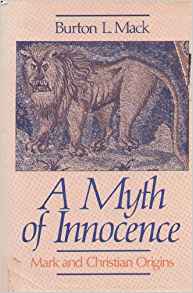 Now that last line is remarkably refreshing stuff! It almost seems obligatory now for historical Jesus scholars to wax at length how Jesus “must have known John” before the baptism, “was a disciple of John”, and even argue that Jesus’ teachings were influenced by John. Surely the simplest explanation is that the author who crafted John as the precursor of the Christ would naturally craft some overlap in their preaching. It is simply a farce that anyone can call him or herself a historian and seriously write such fanciful nonsense without a shred of evidence. It is entirely an assumption. Fortunately one can find scholars like Mack to offer some balance.

Reasons for its invention:

As the story stands it serves to link Jesus up with a mythic view of Israel’s history and point up the contrast between Jesus and John: Jesus will not baptize with water as John does, but with the spirit. So the lore is mostly legend to confirm Jesus’ importance as a figure of epic proportions.

It belongs to the later layers of Q, composed not much before the time of Mark, and thus represents a stage of reflection where interest in the founder of the Jesus movements gave rise to biographical depiction.

The biographical narratives do not make a set, do not constitute a memory tradition, and cannot be used to reconstruct the life of Jesus. (pp. 54-5, my paragraph formatting and emphasis)