I have just stumbled across a blog that brings my university student days back to me with vivid memories of personalities and events that were affected me deeply at the time — forcing me to face up to how the world really works. I have since lamented the fading of radical and direct action from university life but this blog brings back some disturbing memories that no-one would really want repeated.

Most of the names mentioned — especially on the second part of the blog — I knew personally, one even from school days. We were not close buddies but he did share with me his experience of being taken by Commonwealth police in a car down to an isolated wharf. My recollection is that the police were being publicly humiliated by their failure to locate the ones who were printing banned political tracts and to find one student in particular who had retaliated against police in a frightening mob situation with a series of vicious punches. He told me how the police pulled out a gun as he sat in the back seat of their car that night at that wharf and told him they could make it look like suicide.

I wonder if I ever crossed paths with the author of the blog while I was at the same university in the same years as he. I don’t recall his name and probably didn’t. But we could share memories if we did ever meet (it’s sad to see his health circumstances as explained in his blog):

Vietnam and Damascus via Coronation Drive

In the first part he even has a photo of Diane Cilento. I recall being mesmerized by her stage performance in Shakespeare’s Taming of the Shrew a few years afterwards.

In part 2 I see Bob Katter there. I never knew who he was on campus though I did know of one small firebrand who led a minority student reactionary (pro conservative) viewpoint. Now I see that it was the same Bob Katter who is something of a populist independent in politics today. The names more memorable to me are those of Dan O’Neill, Brian Laver, Jimmy Prentice and Dick Shearman.

Dick shocked the establishment of the day by visiting North Vietnam and returning in a black Viet Cong suit. When the Vice Chancellor met students at a courtyard rally (memorable for the constant blaring of the Beatles new and subversive White Album) he insisted that they could not, as they had been seeking to do, erect tents in the courtyard. Jimmy took the mike and calmly sought clarification from the VC: “So are you saying we are not allowed to have an erection in the courtyard?”

Ah, those were the days.

As for the politics and the way the media worked then, now that was a real education. I can’t surpass Dennis Wright’s portrayal of it in his blog.

One more detail. I stumbled upon this blog while looking to see what happened to a philosopher lecturer whose post-graduate classes I once enjoyed so much. Ted d’Urso. I liked Dennis Wright’s account of him, too, except that I found he had more humour than he appears to have displayed in Dennis’s class. Maybe he had learned to relax more by the time I met him. He was not wearing a white shirt and tie then, either.

Dennis recalls some words he spoke to his class then:

‘Some of you in this room are going to be sitting in a paddy field in Vietnam in two years, and when you come under fire for the first time, you’re going to say “What the hell am I doing here?” All I want to discuss with you are some facts you can check with any reliable source, Then you’ll know why someone in a black t-shirt and pants, someone you won’t even see, is going to try their best to kill you….’

In another online article (2007) Ted (now retired) cites a prophecy of Rosa Luxemburg:

As long ago as 1918 Rosa Luxemburg predicted that the alternatives to capitalism were socialism or barbarism, the latter now well under way. With the defeat of the hopes for humanistic socialism, the plans now in progress by the Pentagon for military supremacy in an increasingly resource-scarce future (the pre-emptive invasion of Iraq is a foretaste of future conflicts) . . . .

How depressing. Especially since observing all that has happened since then and especially with the most recent media and political gloating over the barbarism we have all witnessed in the past few months in Libya and that looks like extending its bloody life into the weeks to come. It’s all tied up with Western resources and economics, of course. I can never forget another memorable phrase I picked up in one of his classes: the nazi years in central Europe described as “barbarism empowered by technology.”

God I hope something can come out of these new Occupy movements. We are seeing similar (not quite as bad?) sorts of violence now in Melbourne as we saw back in 1968 in Brisbane. But there has been real progress and that’s clear, too. Back in ’68 the mere act of walking down a street with a placard really was considered orc-centric as Dennis reminds us. 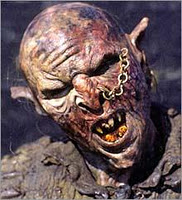