René Salm has shared his findings on the historical roots of the term we know as Nazarene. The pdf file, The Natsarene and hidden gnosis, is available on the mythicist resources webpage.

This is from the forward of the 20-page article:

This lengthy Addendum follows the third installment (Chapters 3–4) of my translation from the German of Ditlef Nielsen’s book, The Old Arabian Moon Religion and the Mosaic Tradition (1904). . . . [That book] explores a number of still novel themes which are foundational to my thought, such as: the influence of North Arabian religion on early Israelite origins, and in turn on Christianity; the gnostic nature of the religion of Midian, where Moses allegedly sojourned and learned from Jethro; and the gnostic character of the most ancient Israelite religion.

. . . . In the Addendum, I show that these terms [Nazarene and Nazoraean] reflect the Semitic n-ts-r (nun-tsade-resh), a root with specifically gnostic connotations going back to the Bronze Age. The dictionary tells us that Hebrew natsar means “watch, preserve, guard.” Its cognates in related Semitic languages also signify “secret knowledge” and “hidden things.” . . . .

. . . . . For perhaps the first time, we can now see that Natsarene (or a close cognate, with Semitic tsade) was widely used in early Middle Eastern religions to designate the person of advanced spirituality, a spirituality linked to hidden gnosis. Hence the title of the Addendum, “The Natsarene and hidden gnosis.” . . . .

The table of contents: END_OF_DOCUMENT_TOKEN_TO_BE_REPLACED 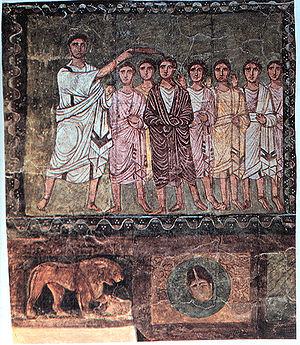 This continues from Part 1 where I began discussing what Richard Horsley has to say about popular messianic movements in Israel up to the time of Jesus in Bandits, Prophets & Messiahs. Previous posts addressed the concept of a future messiah among the literate elites. This post considers what Horsley has to say about the way messianic movements among the general populace grew out of the ancient popularity of the institution of kingship. I have only two reservations about Horsley’s argument:

(2) Horsley can do no more than assume that there was widespread messianic hope among the masses – he offers “little or no evidence” for this. The primary evidence he does offer is the sudden outburst of rebellions at the death of Herod and again prior to the war with Rome. He believes that such rebellions are evidence that messianic hopes had lain “dormant” in the minds of the people for many generations up to those times.

So the evidence is very thin. In my last post on this topic I referred to William Scott Green’s claim that evidence for messianic hopes up till the Jewish rebellion of 66-70 is not unlike a proof-texting exercise. It has long been assumed there must have been such a hope in order to make sense of “a historical Jesus.”

The Tradition of Popular Kingship? END_OF_DOCUMENT_TOKEN_TO_BE_REPLACED