Gilad Atzmon recommends a number of books that address underlying causes of hostility against Jews. One is The Jewish Century by Yuri Slezkine. Of Slezkine’s theory of ethnic identity the Wikipedia article explains:

Slezkine characterizes the Jews (alongside such groups as the Armenians, overseas Chinese, and Gypsies) as a Mercurian people “specializ[ing] exclusively in providing services to the surrounding food-producing societies,” which he characterizes as Apollonian. With the exception of the Gypsies, these “Mercurian peoples” have all enjoyed great economic success relative to the average among their hosts, and have all, without exception, attracted hostility and resentment. Slezkine develops this thesis by arguing that the Jews, the most successful of these Mercurian peoples, have increasingly influenced the course and nature of Western societies, particularly during the early and middle periods of Soviet Communism.

My gut reaction to reading a theory dividing people into Mercurians and Apollonians was that this is surely rubbishy oversimplification. But then I read a sample of the book . . . . 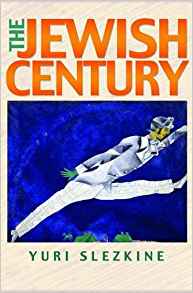 The publisher of this book makes a key sample chapter available online and I find the concepts most interesting. It appears that Slezkine has been able to understand anti-semitism much more broadly than any thesis that seeks biology or religion as an explanation. I have bolded some of the key sections for easier skimming.

There was nothing particularly unusual about the social and economic position of the Jews in medieval and early modern Europe. Many agrarian and pastoral societies contained groups of permanent strangers who performed tasks that the natives were unable or unwilling to perform. Death, trade, magic, wilderness, money, disease, and internal violence were often handled by people who claimed–or were assigned to–different gods, tongues, and origins. . . . .

All these groups were nonprimary producers specializing in the delivery of goods and services to the surrounding agricultural or pastoral populations. Their principal resource base was human, not natural, and their expertise was in “foreign” affairs. They were the descendants–or predecessors–of Hermes (Mercury), the god of all those who did not herd animals, till the soil, or live by the sword; the patron of rule breakers, border crossers, and go-betweens; the protector of people who lived by their wit, craft, and art. END_OF_DOCUMENT_TOKEN_TO_BE_REPLACED